Speculation, extraterrestrial life, and Kepler 452b

This will be my last post for a bit, as I'm going on a short hiatus for a (hopefully) well-deserved vacation.  I'll be away for three weeks, so my next new post will be on Monday, August 17.

This is a chance for you to check out some other great blogs and webpages, so here are a few of my favorites:

That should be enough to keep you occupied while I'm gone, don't you think?

So until my return, keep reading, keep thinking, and keep hoisting the banner of logic and reason... and I'll see you on the 17th!

It is one of my dearest hopes that unequivocal proof of extraterrestrial life is discovered during my lifetime.

I'm buoyed by the discovery of extrasolar planets, with new ones being identified virtually every other day.  As astronomers develop better and more sensitive techniques for detection, more and more of the planets they find are turning out to be small, rocky worlds like our own, and some are in the "Goldilocks Zone" -- that region surrounding a star where the temperature would allow liquid water to exist.  Not too hot, not too cold... just right.

The effort to prove that we're not alone in the universe has just received a nice shot in the arm in the form of a project called Breakthrough, funded by Silicon Valley entrepreneur Yuri Milner and announced this week by none other than eminent physicist Stephen Hawking:

We believe that life arose spontaneously on Earth, so in an infinite universe, there must be other occurrences of life.  Somewhere in the cosmos, perhaps intelligent life might be watching these lights of ours, aware of what they mean.  Or do our lights wander a lifeless cosmos, unseen beacons announcing that, here on one rock, the universe discovered its existence?  Either way, there is no better question.  It's time to commit to finding the answer, to search for life beyond Earth.  The Breakthrough initiatives are making that commitment.  We are alive.  We are intelligent.  We must know.

The project will survey over a million of the closest stars for any signs of extraterrestrial intelligence. The technology required for this is staggering; Breakthrough will be covering ten times the number of stars of any previous SETI project, and do so a hundred times faster.

"We will be examining something like 10 billion radio channels simultaneously," said University of California, Berkeley astronomer Geoffrey Marcy, who has been involved in previous efforts to locate extrasolar planets. "We're listening to a cosmic piano, and every time we listen with the telescopes, we'll be listening not to 88 keys, but 10 billion keys."

Couple that with this week's announcement of the discovery of the "most Earth-like extrasolar planet ever found," Kepler 452b, and it's been a pretty good week for people who, like me, think that Contact is one of the best movies ever.

Which is thrilling.  But of course, given the human tendency to take what we know and run right off the cliff with it, this week's announcement was accompanied by a couple of rather ridiculous articles from media sources that should really know better. 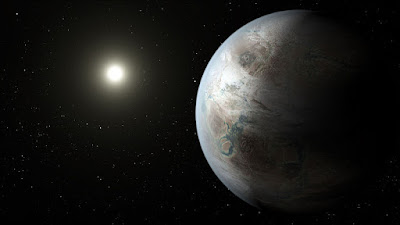 Starting with the article "Is There Life on Kepler 452b, the Most Earth-like Planet Ever Discovered?" from the site CosmosUp, the text of which should state, in its entirety, "WE DON'T KNOW."  But there's no reason not to spin a nearly complete lack of information into a lengthy article, right?  It's laced with quotes from actual scientists (who also should know better), such as the following baffling assessment from NASA's former chief operating officer, Carlos Gonzáles Pintado:


Mathematically speaking, there’s high possibility that could be intelligent life on Kepler-452b... We move in four dimensions and to get something extraordinary we have to find some ‘new’ dimensions.  Some theorists believe that the universe must have eleven dimensions and we are at the dawn, we ‘discovered’ just four and nothing more.  When we would find the other missing seven, maybe we’ll find something in the middle to break the barrier of speed of light.

Which gives me the impression that however Mr. Pintado may excel at being chief operating officer, he doesn't know a damn thing about physics.  Finding the "missing seven dimensions?"  Then finding something "in the middle of them?"  What the hell does that even mean?

And what is a "high possibility, mathematically speaking?"  2%?  50%?  98%?  The fact is, we know nothing about Kepler 452b except for an estimate of its size and distance from its parent star -- most importantly, we have no information about the composition of its atmosphere.  Even if it's in the Goldilocks Zone, what's to stop it from being like Venus -- a boiling hell of a planet, with an atmosphere made primarily of carbon dioxide and hydrogen sulfide?

The fact is, Pintado is doing what members of scientific institutions shouldn't ever do, which is publicly engaging in idle speculation.  It's hard enough getting laypeople to understand how science works without this sort of thing.

Worse still, we have Jeffrey Schweitzer's piece for Huffington Post entitled "Earth 2.0: Bad News for God."  Schweitzer is a neurophysiologist and former White House Senior Policy Analyst, which didn't stop him from writing the following:


[I]t would be difficult to claim the unique position of universe center if other planets held life that was zipping around in anti-gravity cars traveling at the speed of light.  Clearly, if the ancients knew there was alien life, any form of life at all, the idea that the earth was the center of the universe would be more difficult to sustain.  Again, though, there is no mention of alien worlds or life beyond this little blue dot.

None of the 66 books of the bible make any reference to life other than that created by god here on earth in that six-day period.  If we discover life elsewhere, one must admit that is an oversight.  So much so in fact that such a discovery must to all but the most closed minds call into question the entire story of creation, and anything that follows from that story.  How could a convincing story of life's creation leave out life?  Even if the story is meant to be allegorical, the omission of life elsewhere makes no sense.

So the implication is that the discovery of extraterrestrial life, or (better) extraterrestrial intelligence, would be a serious blow to religion.  Schweitzer himself calls into question whether his own contention is true, however, in his last paragraph:


Religious leaders will simply declare that such life is fully compatible with, in fact predicted by, the Bible...  They will create contorted justifications to support this view, cite a few passages of the bible that could mean anything, and declare victory.  Don't say I did not warn you.

So if you think that the religious will be able to argue away extraterrestrial intelligence as being consistent with the bible, why is the discovery of Kepler 452b "bad news for god?"  Or were you just trying to come up with an eye-catching, click-baity title?  Because let's face it; if the overwhelming mountains of evidence in favor of evolution hasn't convinced the biblical literalists that their worldview is wrong, then receiving a hearty "NuqneH!" from the Klingon home world won't make a damn bit of difference either.

Religion, after all, has nothing to do with evidence; it's all about revelation and internal experience.  So Schweitzer's suggestion that the discovery of extraterrestrial life will have any effect at all on the devout is probably as accurate as all of the other times people have declared that belief in a higher power was on its way out.

Anyhow, none of this should minimize the fact that we live in an amazing time, when we are taking steps toward solving one of the most fundamental questions we have -- whether life is common in the universe.  It'd be nice, however, if people would keep their eye on the ball, rather than zooming off on tangential speculations that really have nothing to do with the reality.  The reality, honestly, is cool enough in and of itself.