Today's question is: Is there any claim that is so stupid, so obviously ridiculous, that woo-woos will immediately recognize it is as bullshit?  Or can anything get published on Spirit Science and Metaphysics?

The answer is, unfortunately, that there is apparently no lower threshold for plausibility.  Because this week an article appeared over at SSaM that claims that an Indian "holy man" has not eaten for 75 years, and the majority of the people commenting didn't say, "Nonsense," they said, "Wow!  That's cool!  I'd like to learn how to do that!"

The article tells of Prahlad Jani, who lives in a cave near Ambaji Temple in the Indian state of Gujarat, who says he doesn't eat or drink.  Anything.  Ever.  At the age of seven, Mr. Jani was approached by some Hindu goddesses, who said, basically, "Yo, kid!  Knock it off with the food already!":


Three goddesses appeared to me and bade me to follow. Ma Kali, Ma Lakshmi, and Ma Saraswati.  I consented, prepared myself, and asked: ‘What about my food?’  They each put a finger on my lip and said ‘You need not be concerned about food ever again’.  I was seven, and from that day I stopped eating and drinking.

How does he manage this?  Because his head makes nectar, or something:


Ever since that blessing, Prahlad Jani claims that he has gained his sustenance from the nectar that filters down through a hole in his palate...

His claims were scientifically studied by a team of 30 specialists during three weeks of a variety of tests at a hospital.

They took him into then Sterling Hospital in Ahmedabad, India.  They put him under 24 hour observation in front of cameras and found out that he did not take any kind of food or water in the 15 days that he was in hospital.  No food or water for half that time would be a sure death for anybody else.  And he did not pass urine or stool either.

The doctors were completely surprised at this miracle.  “We believe that the sadhu Prahlad Jani’s body went through biological transformation as a result of meditation and powerful yoga in a completely natural environment that he stays,” said neurologist Dr. Sudhir Shah.

The doctors in India are guessing that this phenomenon relates the Amrita Chakra (third eye chakra), as Hindu vedas speak of it being able to produce a divine nectar which sustains life.

Righty-o.  Let's let James Randi watch him for fifteen days, and I'm sure we'll find out that Mr. Jani is slipping out periodically for a cheeseburger and a large Coke.  And, I might add, making the normal number of trips to the bathroom. 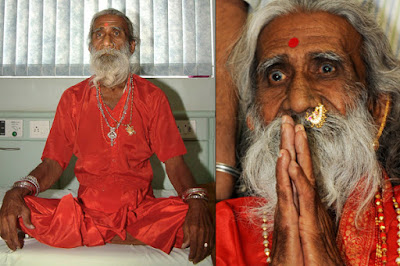 And it wouldn't be a SSaM article if they didn't append to it a goofy quasi-scientific explanation for the whole thing:

At a fundamental level of nature, nutrition is really just vibrating strings of non-local energy.  Could he somehow be receiving this information somehow without the need to physically ingest food?

Of course!  When I eat a peanut butter and jelly sandwich, it's so I can get my recommended daily allowance of superstrings!

I wonder why that is?

So here we have a claim that is obviously absurd.  And not only does it get published in SSaM... people believe it.  Here's a sampler of comments that appeared on the article.  Spelling and grammar are as written, because I got tired of writing [sic] every other word.


anything is possible to an enlightened person who clears their whole system of toxins and repels all negativity from there mind!!  To the ones who say bollocks,get off yr arse and do sum hard research insted of living your closed minded life!

it's definitely real life possible... just not entirely necessary... it's a free world afterall... own self-imagery...

Look up Sun Gazing.  It is said that if you stare at the sunrise or sunset with your bare feet on the ground for a few minutes a day for a year then you won't have to eat again.  I would love to try that theory but we have busy lifestyles that have nothing to do with nature.  Also, look up earthing!  When your bare feet are touching the ground, electrons pass through your feet and help heal and give you energy.  Maybe that's why most "primitive" cultures were always barefoot or wore shoes that were conductive to the earth.  It's not far fetched even though it sounds completely off the charts but you have to have a completely different mindset similar to an employee mentality compared to a business owner mentality.  An employee mind will say how much does it cost, a business owner will say how much will it make me.  Same subject, different perspective.  Anything is possible with the power of the mind!

Also, this is why animals dig a hole when they are sick.  They lay in the hole to feel better although sometimes its just their time.

I have met sadhus who can stop their heart or at least limit their pulse to 1 or 2 per minute.  Yoga and meditation is beyond the scope of biology yet.  Its an ancient art that should not be just ridiculed.  Science is yet to discover it yet.  A human in 1800's would have called todays' technology bogus or we can say it must have been beyond his scope of imagination or understanding.  We must look at it with a broad mind, although it may seem fake now but we might discover the science behind it after 50 years or so.

I have only one response to all of this, which is:

I think if I never hear the whole "science didn't know about X a hundred years ago, therefore anything is possible" argument ever again, it'll still be too soon.  Can we all, just once, apply a little logic, a little critical thinking, maybe one single fucking demand for scientifically acceptable hard evidence here?

The answer, apparently, is "No."  That's being "closed minded."  That's "ridiculing an ancient art."  That's calling "electrons passing through your feet and giving you energy" what it actually is, which is "being electrocuted."

Okay, I know SSaM exists as clickbait, for the sole reason that it makes money for them and their sponsors and advertisers.  I get that.  What I don't get is that there are people who apparently swallow everything that sites like that publish.  This goes beyond being credulous; this is taking the entire canon of scientific rationalism and throwing it out of the window.

So that's our excursion into the ether for today.  I hope you derived lots of nourishing quarks from reading this.  Me, I'm off to fix myself some bacon and eggs.  Unless I get visited on the way by three Hindu goddesses.  Which, I have to admit, would save me a lot of money and trips to the grocery store.