A matter of truth

I'm willing to believe that I take stuff too seriously sometimes.  "Lighten up" is a comment I've heard since I was about six years old, as is "You're a bit tightly wound."

So let's just take it as a given that my annoyance at the latest Facebook spam fad might be an overreaction, okay?

Anyone who participates in social media has probably already figured out that I'm talking about the "What Does My Name Mean?" site.  I enter my name, and I'm told that "Gordon" comes from the Greek words "Gor" meaning "invincible" and "Don" meaning "god."

The problem is, every single one of them is wrong.  Made up, fabricated, untrue, and whatever words you can think of to that effect up to and including "liar, liar, pants on fire."  I know this because I'm a linguistics geek, remember?  Gordon is from Gaelic, not Greek, and it doesn't mean "invincible god," it means "hill dweller."

Which is not nearly as glamorous as "invincible god," but considerably more accurate, given that the Scottish side of my family were peasants.

And it's not just my name that is incorrect.  All of them are this way.  You keep being told that your name means "glorious prince" even if you enter your name as "Bullshit" or "Buttface" or "Fuckoff." 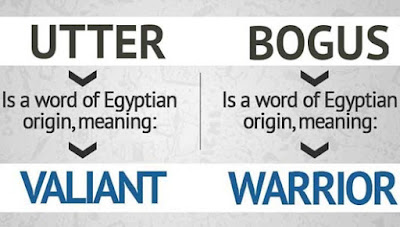 The whole thing is clickbait, an attempt (and apparently a successful one) to get millions of people to click on a link.

So what's the harm?  As a friend of mine said, "It's just a party game.  Ignore it."  Which I could, except for two things.

One is that such clickbait sites are sometimes linked to malware and viruses.  Some computer-savvy folks have determined that this one probably isn't, but a good many of them are, including the ubiquitous "99% of people can't come up with a man's name beginning with E.  Can you?" links.  At best, these sites are equipped to do data harvesting; at worst, you could come away with a computer virus.  So showing a little caution about what you click and share is a good idea.

The other thing, though, is more philosophical.  Dammit, truth matters.  We're encouraged all the time by this culture to fool ourselves, to (on the one hand) take personality tests that show that we're Special and Gifted and Misunderstood, and (on the other) that we've got personal and physical defects that can be remedied if you'll just buy this product that is On Sale For A Limited Time Only.  We're constantly bombarded by exaggerations, fibs, and outright lies, often motivated by someone's desire for your attention, loyalty, or money.

You should care if you're being lied to, even if it's about something insignificant.  Why is it fun to be told that your name means "Beautiful Queen" if it doesn't?

It's all too easy to get lulled into a place where comfort matters more than truth.  What else keeps the multi-million-dollar industry of astrologers and psychics in business?  The desire for warm and fuzzy messages from the Other Realms, in the face of the hard truth that such practices are pseudoscience and their practitioners charlatans, is what keeps their victims coming back for more.

So okay.  I know this one is apparently harmless.  I can accept that because I'm a linguist, and a little too tightly wound, the whole thing is grinding my gears way more than it reasonably should.

But it still seems to me that we need to put more value on the truth, even in small matters.  As Alexander Solzhenitsyn put it: “The simple step of a courageous individual is not to take part in the lie.  One word of truth outweighs the world.”
Posted by Gordon Bonnet at 3:31 AM