One thing I've never understood is the determination of some people to believe in counterfactual nonsense despite rigorous evidence to the contrary.

Let's take, for example, the news story that a friend and loyal reader of Skeptophilia found yesterday, wherein we learn that a couple in Worcester, Massachusetts is suing the private school their son attends because they claim that the wifi signal in the school is making him sick. 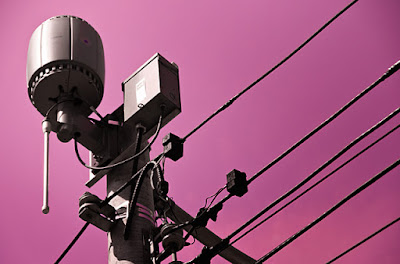 [image courtesy of photographer Marc Lostracco and the Wikimedia Commons]

The boy, they say, has "electromagnetic hypersensitivity syndrome," which makes him react badly to being exposed to electromagnetic fields.  He has developed headaches, nausea, and nosebleeds, they say, and the wifi is to blame.  School officials wouldn't do anything about it, so the parents sued.

There are just two problems with this claim.

Problem one is that earlier this year, possibly in an effort to forestall such nonsense, the school hired a company called Isotrope to do a complete assessment of the school with respect to the safety of its electronic equipment.  "Isotrope’s assessment was completed in January 2015 and found that the combined levels of access point emissions, broadcast radio and television signals, and other RFE emissions on campus 'were substantially less than 1/10,000th of the applicable safety limits (federal and state)," the school said in an official statement.

A 2006 study done by G. James Rubin et al. of King's College, London, called "Are Some People Sensitive to Mobile Phone Signals?", found that the answer is, essentially, "No."  They tested ordinary folks and "sensitives," exposing them to real and sham (i.e. non-existent) electromagnetic fields, and documented the symptoms participants had afterwards.  The results are damning:


(N)o strong evidence was found of any difference between the conditions in terms of symptom severity.  Nor did evidence of any differential effect of condition between the two groups exist.  The proportion of sensitive participants who believed a signal was present during GSM exposure (60%) was similar to the proportion who believed one was present during sham exposure (63%)...

No evidence was found to indicate that people with self reported sensitivity to mobile phone signals are able to detect such signals or that they react to them with increased symptom severity.  As sham exposure was sufficient to trigger severe symptoms in some participants, psychological factors may have an important role in causing this condition.


The major study endpoint was the ability of the subjects to differentiate between real magnetic stimulation and a sham condition. There were no significant differences between groups in the thresholds, neither of detecting the real magnetic stimulus nor in motor response... Differences between groups were mostly due to false alarm reactions in the sham condition reported by subjectively electrosensitives (SES). We found no objective correlate of the self perception of being "electrosensitive."

Even more devastating to the claim is a study done by Lena Hillert et al. of the Environmental Illness Research Centre of Huddinge, Sweden, which found that there is a good treatment scheme for electromagnetic hypersensitivity syndrome... cognitive behavioral therapy:


Cognitive behavioural treatment, as part of a multidisciplinary treatment package for patients with electric sensitivity, was evaluated in a controlled trial. Ten patients who received treatment were compared to 12 controls. Outcome measures included different dimensions such as symptoms, beliefs, behaviour, and biochemical measurements of stress-related variables. All outcome measures were collected prior to the study, post-treatment, and after an additional 6-month follow-up.

The therapy group rated their electric sensitivity as significantly lower than did the control group at the 6-month follow-up, and reduction of self-rated discomforts from triggering factors was significant in the therapy group. There were no systematic changes in the biochemical variables. The symptom indices were significantly reduced over time, and ability to work continued to be good in both groups.

The prognosis for this syndrome is good with early intervention and cognitive therapy may further reduce the perceived hypersensitivity. This may have important implications on handling of patients with electric sensitivity.

In other words, the evidence is pretty clear that electromagnetic hypersensitivity syndrome is purely psychosomatic in origin, and best treated by mental health therapy.

And there certainly isn't any evidence that turning off the wifi will make a damn bit of difference.

It's to be hoped that the judge in this case, Timothy S. Hillman, will do his homework, and throw the lawsuit out.  Even more beneficial would be getting the child, and possibly the parents, some psychological counseling.

Because whatever is making this kid ill is clearly not the electromagnetic fields in the school, or anywhere else.  And if he is not suffering from some kind of psychosomatic illness, possibly engendered by the worries of the parents, then there is another organic cause for his symptoms, which should be looked into for his health's sake.

What's clear is that wasting time suing the school over an imagined risk isn't helping anyone, least of all the child.
Posted by Gordon Bonnet at 4:05 AM