The Question of the Day is:  At what point does a prominent figure go so completely off the rails that people stop believing him?  Or is there no lower threshold for credibility?

Interestingly enough, I'm not talking about Alex Jones, or even Rush Limbaugh, here.  Today's contribution to the Annals of What-the-Fuck comes from Mike Adams, the "Health Ranger," owner of Natural News.

Adams has made his name touting dubious nutrition tips and scaring the absolute shit out of people over the dangers of vaccines, but now has ventured into conspiracy paranoia of every type.  And yes, I know that some of the stuff on Natural News exists purely as clickbait, to push up the site's rankings in search engines, but it's hard to escape the conclusion that Adams himself thinks what he's saying is true.

Consider, for example, his take on the horrific explosions that happened last week in Tianjin, China. 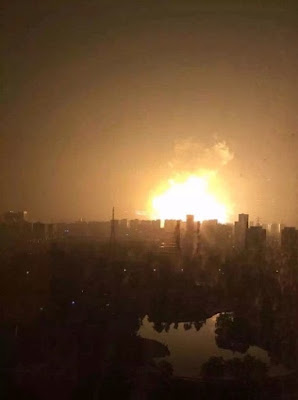 Most people believe that the blasts were caused by poorly-stored volatile chemicals, an explanation that gains credence when you realize that Tianjin is a major industrial seaport, and Chinese safety standards are lax at best.  This is not to downplay the magnitude of the disaster; over a hundred people are known dead, and the chain reaction of explosions devastated a huge area in the city.  According to a BBC article on the explosions,


Before the explosions, several firefighters were already at the scene trying to control a blaze.  There have been suggestions that water sprayed on some of the chemicals could have led to the blasts.   Calcium carbide, known to be at the site, reacts with water to create the highly explosive acetylene.

Chemical experts suggest an acetylene blast could then have detonated the other chemicals for a much larger blast.

The China Earthquake Networks Centre said the initial explosion, in a city with a population of around 15 million, had a power equivalent to three tonnes of TNT detonating, while the second was the equivalent of 21 tonnes.

The second was so big that satellites orbiting Earth picked it up as well.

But such measured, thoughtful reporting isn't good enough for people like Adams.

Nope.  He has to claim that the Tianjin explosions were carried out by American "space weapons," and that China and the United States are "already at war," because of China's devaluation of the yuan:


Chinese dissidents have told Natural News they have reason to believe the attack on Tianjin is a warning shot from the United States, which is terrified that China is on the verge of announcing its own gold-backed currency while declaring a fire sale on U.S. debt holdings.

The actions would collapse the U.S. dollar and destroy the U.S. economy, sending the United States into economic freefall. The "Rod of God" weapon deployment by the U.S. Pentagon, we're told, was America's "shot across the bow" to send a powerful warning message to China while disguising the attack as a domestic chemical explosion.

What evidence does he have?  Apparently people saw helicopters in the air immediately before the blast occurred.  Also, the Chinese government is controlling the movement of tourists, requiring them to register their passport numbers and hotel accommodations with officials.  (Didn't they already?)

'nuff said.  The only possible explanation is that the United States is blowing up Chinese seaports using space weapons.  Because that's credible.

What's next?  Claiming that there's a ground war being fought entirely between groups of crisis actors?  After all, why wage an actual war when you can just trick all the sheeple with footage of fake battles and false flags?

Okay, maybe Adams really is pulling our legs, here.  Maybe he's entirely in it for the ad revenue, and is making shit up, Weekly World News-style, just to keep us coming back.  But if you read what he writes, he sounds as if he's entirely serious.

Which brings up the troubling question of how many of his readers believe all of this stuff.  Are there really that many folks out there who think that everything in the mainstream news is false?  Because the way Natural News links get passed around on social media can't just be explained by the "Hey, you'll never guess what Mike Adams is claiming today!" phenomenon.

I dunno.  I find the whole thing troubling.  Not that it's impossible that Adams himself is paranoid; paranoia is, unfortunately, an all too real manifestation of some psychiatric disorders.  But the fact that enough readers exist to keep Natural News in business scares the hell out of me.

Because if that many people actually believe that the United States is blowing up Chinese cities with ray guns from space, I'm ready to concede defeat on the skepticism and move on to writing fiction full time.  After all, if it works for Mike Adams, it can work for me.
Posted by Gordon Bonnet at 4:21 AM