It is a mystery to me why some people think that any curtailment of their choice to be as offensive as they want is an infringement of their fundamental rights.

It's this kind of attitude that led to the following, which has been widely posted (often to shouts of acclamation): 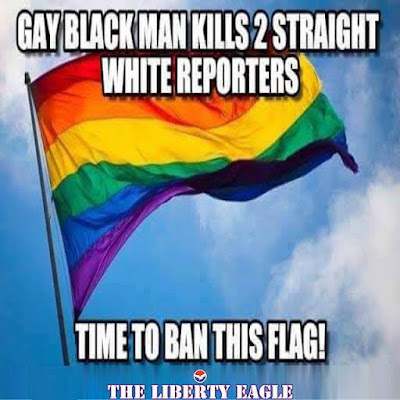 The level of "I don't get it" that is embodied in this one image is staggering, even if (as one poster said), "It's satire."  Are you really trying to equate the gay pride flag, a symbol of solidarity in the face of oppression, with the Confederate flag, which to many people represents slavery, prejudice, bigotry, and persecution?  And further, are you actually claiming that Vester Flanagan, the gay African American man who gunned down two reporters while they were on the air, was motivated to do so by his homosexuality to the same extent that Charleston church shooter Dylann Roof was motivated by his race hatred and espousal of white supremacy?

Satire, my ass.  This isn't satire.  This is redneck rah-rah willful ignorance.

And need I add that every person I've seen post this is a heterosexual white man?  Nah, probably didn't need to mention it.  The enculturation of privilege has blinded these people to the possibility that not everyone has the same access to security, acceptance, and safety that they do.  So let me do a little wake-up call for y'all.

You don't know what it's like to be in danger when you walk down the street because of your gender.  You don't know what it's like to be jeered at because of your skin color, and to wonder if those jeers could progress to violence, to consider whether your decision to be in this place at this time might be the last bad decision you'll ever make.  You can hold hands with and kiss the person you love in public without having to worry that you'll (at best) be told you're going to burn for eternity, or (at worst) be the victims of assault.

You don't know what it is to be in a position of powerlessness, every day of every year, because of something you have absolutely no control over.

And if you're saying, "You don't either.  You're a heterosexual white man, too," you're absolutely right.  The difference is, I know I don't know these things.  I am aware that my privileged status in this culture has put me in the position of never being obliged to think about any of this.  You, apparently, are not.

It's the same business as the outcry against Caitlyn Jenner when she won the ESPY Courage Award.  "That's not courage!" people snarled.  "It's not courage to claim you're female when you're not!"

Really?  Are you transgender?  Have you fought with the knowledge that your biological gender, your mind, and your sexual desires simply don't line up the same way they do for the majority?  Do you have any idea what it's like to live with the social stigma of non-cisgender identification?  Have you had to deal with the repercussions from family, friends, the public?

Then shut the fuck up.

I have studiously avoided issues of race, privilege, and prejudice in this blog, for the very good reason that as a member of the most privileged class in the United States, my perspective on those issues would be worthless.  But if I am not knowledgeable about something, I stay silent on the topic, and avoid posting inflammatory rhetoric that demonstrates my ignorance and shallowness to the world.

Which is a reservation that some people evidently lack.
Posted by Gordon Bonnet at 4:59 AM