We're in for a spell of weather...

Why is it that some people will believe anyone's pronouncements on anything, as long as said person is not a scientist?

I and others have ranted repeatedly about a large slice the public's dismissal of climate science and evolutionary biology.  And the anti-science stance of each of those, I know, comes from a different source; the petroleum lobby's power over the political system in the first place, and religion in the second.  But this general distrust of anything scientific runs deeper than that, touching on topics where there is no obvious motive for disbelief, where people for some reason will accept folksy tale-telling over evidence-based, data-driven research.

And that makes no sense to me at all.

As an example of this, let's consider The Old Farmer's Almanac, which just came out with its predictions for the winter last week.  And based on their methodology, which as far as I can tell involves voodoo and rain dances, we're going to have a wicked snowy winter.

"The snowiest periods in the Pacific Northwest will be in mid-December, early to mid-January and mid- to late February," the Almanac says, which at least has a better chance of being correct than their predicting a blizzard in, say, July.

But the fact is, no scientist takes what the Almanac has to say seriously, because their weather forecasting isn't science. According to an article in Consumer Reports, the Almanac bases its predictions on "a secret mathematical formula using the position of the planets, tidal action of the moon and sunspots" that is kept in a black tin box in Dublin, New Hampshire.

Because that's gonna be reliable.

And how accurate is it, anyway?  Skeptical blogger Steven Novella found one place where someone actually tested the Almanac's predictions, and guess what happened?


In the October 1981 issue of Weatherwise, pages 212-215, John E. Walsh and David Allen performed a check on the accuracy of 60 monthly forecasts of temperature and precipitation from The Old Farmer’s Almanac at 32 stations in the U.S.  They found that 50.7 percent of the monthly temperature forecasts and 51.9 percent of the precipitation forecasts verified with the correct sign.  These may be compared with the 50 percent success rate expected by chance.

This is my "shocked face."

But what pissed me off the most about this year's predictions was an article from KOMO News Online called, "Who to Believe?  Snowy Farmer's Almanac?  Or NOAA's Warm El-Niñoey Blob?" written by, of all people, a trained meteorologist who therefore should know better.  And while author Seth Sistek concludes that we should probably trust NOAA, which has forecasted a warmer-than-average winter for the northern United States because of a blob of anomalously warm seawater parked off the Pacific Coast of North America, even the fact that he asks the question gives unwarranted legitimacy to what honestly is a bunch of hocus-pocus. 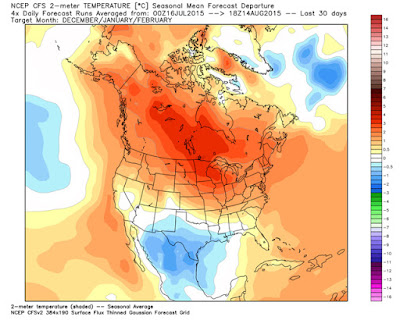 "[I]n the battle between Blob and book," Sistek writes, "I'd have to lean toward the Blob in agreeing with the supercomputers that it'll be a warmer winter."

Which, as endorsements go, is not exactly knocking my socks off.  What's next?  Asking the astrologers to draw up zodiac charts to predict solar flares?

Okay, I'm coming off as pretty harsh toward The Old Farmer's Almanac, I realize.  But the problem is, there's already a tendency in this country for people to buy pseudoscience over science, to distrust researchers, to look at scientists as ivory-tower nerds who are disconnected with practical reality.  We definitely don't need anything to push us further in that direction, even if it is "all in fun." To quote Novella again:

I hear many people quoting one almanac or the other about what kind of winter we are in for. They don’t seem to realize that the almanacs are using 200 year old pseudoscientific methods that have never been validated.  Despite the coy marketing of these predictions, many people take them as legitimate...

It seems that the public did not want the scientific information – they wanted the predictions made by mysterious methods.  I can understand, for marketing reasons, why future editors of the almanac would not consider dropping the predictions.  But here is a recommendation – why not get rid of the two century old dubious methods and replace them with the climate forecasts made by the National Weather Service?

Because, apparently, folksy prognostications still carry more weight than actual science with a large sector of the American public.

Look, I know that meteorology as a science still has a long way to go.  Weather and climate are vastly complex systems, extremely sensitive to initial conditions, and long-range forecasting is still fraught with inaccuracies.  Even the most highly-trained meteorologists, using the latest computer models and our best understanding of how the science works, still get it wrong sometimes.

But damn it all, it's still better than magic formulas in black tin boxes in Dublin, New Hampshire.
Posted by Gordon Bonnet at 3:14 AM