A visit to the PARCC

The PARCC (Partnership for Assessment of Readiness for College and Careers) test scores are coming in, and it ain't pretty.

PARCC is part of the whole Common Core, Test-Students-Till-They-Drop system that upper level educational administration seems so fond of lately.  I'll admit that the basic idea -- to provide all children with a common set of educational standards, and assess them all the same way -- sounds good.  Few could argue with a drive to raise standards, improve literacy, increase deep understanding of math.  In fact, part of its mission statement is, "PARCC helps ensure that all students, regardless of income, family background or geography, have equal access to a world-class education that will prepare them for success after high school in college and/or careers...  set(s) consistent expectations in English and mathematics for every student, and... provides a valid and reliable evaluation of each student’s progress toward them."

But for an educational movement that comes out of a drive for equity and accountability, the implementation of these high-flying goals has been haphazard, and the assessments themselves are riddled with flaws.  The roll-out of new standards was rushed, leaving many teachers without adequate training and materials to deliver a completely new curriculum, and the end-of-year exams have been poorly aligned with curriculum expectations and, in some cases, at difficulty levels that are completely grade-level inappropriate.

This hasn't stopped the anti-public-school movement from treating those scores as if they were actually reliable.  The PARCC data for the state of Illinois were just released last week, and showed a considerable drop in average scores from previous assessments, prompting claims of incompetence against teachers and local administrators, withering criticisms of unions for protecting inadequate faculty members, and calls for defunding public schools and replacing them with charter schools and voucher systems.  It also prompted one Illinois teacher to write a concise list of the flaws in PARCC exams, which include the following:
And need I add that the scores on these flawed exams are being used not only to evaluate children, but to evaluate teachers, administrators, schools, and entire districts? 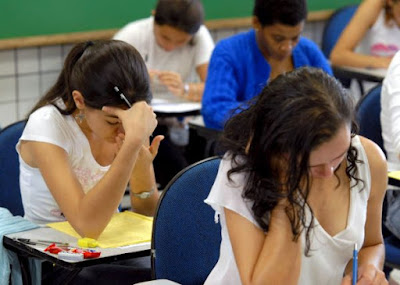 You know who stands to gain here?  Pearson Education, who holds the extremely lucrative contract for designing all the exams, pre-tests, practice tests, review materials, and curriculum guides.  States are spending millions of taxpayer dollars to purchase a framework for assessment that, to put it bluntly, does not work, and then using that framework as a weapon with which to destroy public schools.

It's not just the teachers who are beginning to realize this.  Some institutions are recognizing the inherent flaws in the design and administration of standardized tests -- and are rebelling against the stranglehold they have over the educational system.  Hampshire College, in Amherst, Massachusetts, chose last year to stop accepting SAT and ACT scores from applicants; its president, Jonathan Lash, stated outright that "standardized test scores do not predict... student success" and that "multiple-choice tests don't reveal much about a student."

US News & World Report, which each year releases its rankings of US colleges and universities, retaliated by deleting Hampshire from its rankings.  Lash reacted with a shoulder shrug: "We surveyed our students and learned not one of them had considered rankings when choosing to apply to colleges," Lash said.  "Instead they most cared about a college’s mission... At college fairs and information sessions, we don’t spend time answering high school families’ questions about our ranking and test score 'cut-offs.'  Instead we have conversations about the things that matter: What does our unique academic program look like, and what qualities does a student need to be successful at it?"

Lash said that the experiment thus far has been an unqualified success:

Without the scores, every other detail of the student’s application became more vivid. Their academic record over four years, letters of recommendation, essays, in-person interviews, and the optional creative supplements gave us a more complete portrait than we had seen before. Applicants gave more attention to their applications, including the optional components, putting us in a much better position to predict their likelihood of success here.

I have some hope that these sorts of decisions are indicators of a coming sea change in our attitudes towards paper-and-pencil exams.  But we have a long way to go.  PARCC and the Common Core aren't going anywhere soon; Pearson Education, and people like Secretary of Education Arne Duncan (who famously stated that the only people critical of Common Core exams were "white suburban moms who are upset because they have discovered that their kids aren't as brilliant as they thought") are still pushing flawed assessments down our throats, along with all of the other outcomes -- loss of diversity in curriculum, loss of teacher autonomy in curriculum design and implementation, and a drastic increase in anxiety over testing in the children themselves.

So the fight's not over, not by a longshot.  I can guarantee that the failing scores on PARCC assessments in Illinois are not going to lead any of the powers-that-be to come to the conclusion that it's the assessment itself that is at fault.  They have too much at stake, both philosophically and financially, to reverse course that easily.

So the power is in the hands of the parents, which is why it is so critical that the opt-out movement not lose its momentum.

I'll end with a repeated call for action: opt your children right the hell out of all of the state-mandated standardized grade-level exams -- at least the ones that have no impact on your child's passing a course (which, honestly, is most of them).  Keep them home.  Give Pearson no data to work with.  State departments of education have made unilateral bad decisions about how to assess your children, and it's time to take the control of education back to the local level -- where it should be.

Time to vote with your feet.
Posted by Gordon Bonnet at 2:57 AM