On Friday, September 11, an enormous crane collapsed in the Grand Mosque in the city of Mecca, killing 107 people and injuring 87. 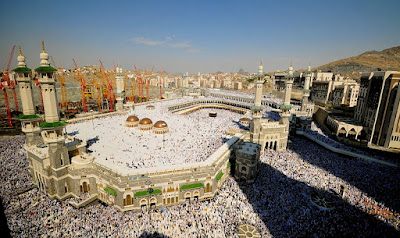 The Grand Mosque of Mecca [image courtesy of the Wikimedia Commons]

The more prosaic amongst us attribute the collapse to the wind from a violent thunderstorm.  Others, however, have called this an "Act of God" in retribution for the destruction of the Twin Towers in 2001.

A writer who goes by the handle Dom the Conservative, and bills herself as "a Christian conservative, mother, and wife" whose purpose for writing "is to inform, anger, and unite 'We the People'" had the following to say:


(A) devastating attack of a seemingly supernatural kind has taken place in the Grand Mosque of Mecca, the largest mosque in the world and the same location to which Muslims make their hajj pilgrimage each year...  Whether you believe in God, Allah, or any supernatural force, the symbolism is eerily sinister, especially on the day that true Islam, the Islam of the Quran and the Prophet Muhammad, reared its ugly head in West.

The people commenting on her post were not nearly so circumspect.  Unsurprisingly, "God works in mysterious ways" was said more than once.  When a commenter suggested that the victims were innocent people, he was immediately mauled by a string of vitriolic comments like "What do you think the people killed in the WTC were guilty of, asshole?" and "No Muslim is innocent.  They all want to kill us" and "If they hadn't been in their mosque worshiping Satan, they wouldn't have died."

None of which is very surprising, honestly.  The attacks of 9/11 are still raw for most Americans.  I know more than one friend who took a few days' vacation from social media so they wouldn't have to be bombarded by reminders of the horrific events of that day and the days following.

But still.  It appalls me that there are people who honestly think that a divine being would work that way.  Do people really believe that the deity that at other times they call "all-loving" and "the prince of peace" would look down at a group of people, none of whom had anything to do with the 9/11 attacks, and say, "Ha!  If I smash a bunch of them, that will teach the rest of 'em a lesson!"

Apparently, the answer is "yes."  But you have to wonder why anyone would think that such a god would be deserving of worship.  If there is justice in the world, it does not come in the form of killing random people to avenge the unjust deaths of a bunch of other random people.

But then I realized; that is exactly how the god of the bible operates.  I recall being vaguely unsettled by this even in my churchgoing days, and actively avoided reading the parts of the bible like the following:
And so forth and so on.  And that's not even counting the most famous instances -- the slaughter of the firstborn children in Exodus, and the horrific drowning of nearly every living thing on Earth in Genesis.

To me, a god like this doesn't sound like anything I'd be even slightly inclined to worship, even if I believed he existed, which I don't.  I'm more inclined to agree with Richard Dawkins:


The God of the Old Testament is arguably the most unpleasant character in all fiction: jealous and proud of it; a petty, unjust, unforgiving control-freak; a vindictive, bloodthirsty ethnic cleanser; a misogynistic, homophobic, racist, infanticidal, genocidal, filicidal, pestilential, megalomaniacal, sadomasochistic, capriciously malevolent bully.

So it's not to be wondered at that people who take the bible seriously think that the collapse of the crane in Mecca, and resulting deaths of 107 innocent people, is the hand of god at work.  That's precisely how the god of the bible does work.

Funny, isn't it, how many of these same people question atheists' basis for morality, when their own moral code is based on the behavior of a deity who evidently considers such an action just?  But that, of course, is far from the only morally questionable stance you find in this belief system: 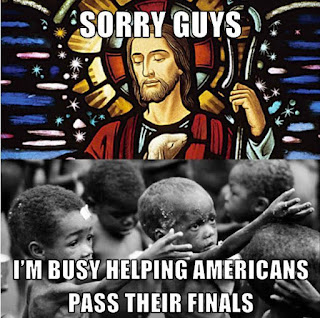 I'm not trying to be offensive, here, it just really strikes me as baffling.  I'll leave you with another quote, this one from the Greek philosopher Epicurus: "Is God willing to prevent evil, but not able?  Then he is not omnipotent.  Is he able, but not willing?  Then he is malevolent.  Is he both able and willing? Then why does evil exist?  Is he neither able nor willing?  Then why call him God?"
Posted by Gordon Bonnet at 3:53 AM