Come as you were

There's a Reincarnation Conference at the end of this month in Scottsdale, Arizona, and I can't go.

Of course, tickets are $225 a pop, and I suspect Carol would have words with me if I blew that kind of money on such a thing.  But still.  It features talks, workshops, and opportunities for hypnosis sessions in which you are guided through "past life regression."  There's a presentation by a psychic lawyer and an "acclaimed materialization medium."  Workshops include: 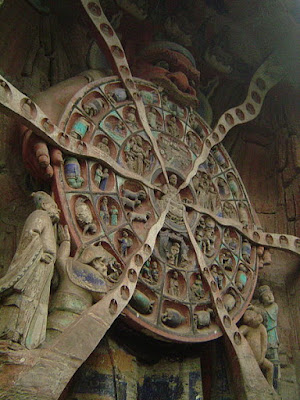 The Dazu Wheel of Reincarnation [image courtesy of the Wikimedia Commons]

A recent poll indicated that one in five Americans believes in reincarnation.  One in ten claims actually to recall a past life. This is grist to the mill of Dr. Brian Weiss, a prominent psychologist who specializes in past life regression.  "I define [reincarnation] as when we die physically, a part of us goes on," Weiss said, "and that we have lessons to learn here.  And that if you haven't learned all of these lessons, then that soul, that consciousness, that spirit comes back into a baby's body."


Well, that all sounds just nifty.  But the difficulty, of course, is the usual one; there's no evidence whatsoever that this actually happens.  The human mind, as I've mentioned before, is a remarkably plastic, and scarily unreliable, processing device.  Experiments have conclusively shown that given enough emotional charge, an imagined scene can actually become a memory, and thereafter be "remembered" as if it had actually happened.  In a context where a subject was being hypnotized by a professional-looking individual with "Dr." in front of his/her name, and perhaps was even being given subtle suggestions of what to "recall," that impression, and its retention as a memory afterwards, would become even more powerful.

So what gets told to someone, how (s)he remembers it, and how that memory is conflated with what else has happened make all of these stories of people who remember past lives questionable at best.  (Here's a well-publicized one about a little boy who supposedly recalls events that happened to him in a past life in which he was a woman named Pam.)  Add to that the possibility of hoaxes and outright lies, and you can see why few skeptics accept what anecdotal evidence we have as convincing.

And then, there's just the statistical argument, that because there are more people alive today than at any time in the past, not all of us can be reincarnated.  Some believers solve this problem by allowing reincarnation from "lower animals."  In that case, it's funny how no one seems to remember being, say, a bug.  "Boy, life sure was boring, as a bug," is something I'd bet you rarely hear anyone say in a past life regression.

Not only does no one remember being a bug, few of them, it seems, were even just ordinary humans.  "The skeptical part of me about the past life thing is that, just statistically, the odds are that in my past life, I was a Chinese peasant, right?" says Dr. Stephen Prothero, a professor of theology at Boston University.  "But hardly anybody ever is a Chinese peasant.  Everybody is Cleopatra or Mark Antony or Jesus, you know?"

Even Dr. Weiss has to admit this is a problem.   "We're not going to be able to extract a blood sample and get DNA and say, 'Oh, I see you were alive in the 11th century,' no," he stated.  "It's people remembering it, so it's clinical proof."

So, once again, we have someone whose definition of "proof" differs considerably from mine.  And I'd be willing to say, "Well, what harm if these people believe that they were once Eleanor of Aquitaine?" except that the past life regressors and the rest of them are bilking the gullible out of large quantities of money.   On one level, perhaps people who are that credulous deserve bilking, but the compassionate side of my personality feels like it's just wrong to take advantage.

In any case, I rather regret that I'll have to miss this month's "Come As You Were" party.  It would have been fun.  I would have loved to see what they'd have made out of trying to do a past-life regression with me.  I think I'd have said... "I'm...  I'm flying through the air.  Free.  Wild.  I'm... well, fuck.  I just got splatted on a windshield."

So it's kind of a pity I can't go.  Oh, well, as the reincarnated are wont to say, there's always next time.
Posted by Gordon Bonnet at 3:12 AM