A few days ago, a friend of mine posted this gem: 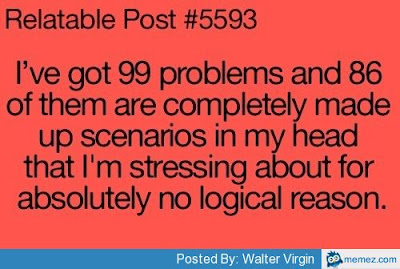 To say I relate to this sentiment is a monstrous understatement.  I have for as long as I can remember been capable of keeping myself awake at night worrying about various possibilities of how the near future could go terribly, terribly wrong.  Many of these possibilities are mutually exclusive.  Some are so wildly unlikely that I would accomplish just as much by fretting over whether Cornell University was secretly creating genetically engineered flying dinosaur super-predators, and they were gonna get loose and eat my home town for brunch.

Doesn't matter.  My brain apparently prefers tossing such hypotheses around than it does getting a good night's sleep.  And every single time, when nothing bad happens, when no airborne T-rexes descend from the sky, my brain doesn't do the logical thing, which is to say, "Wow, what a goober I am.  Next time I won't worry so much."

No, my brain says, "All this does is make it more likely that next time, I'll be correct.  So I should worry even more."

Yes, I know this may sound odd coming from a guy who plays the trumpet of rationalism on a daily basis.  It's entirely possible that I developed my skeptical outlook in order to have a weapon with which to beat my limbic system, which seems determined to make me miserable.

But there's another upside to being a neurotic mess, apparently.  A team of researchers led by Adam Perkins, of the Department of Psychological Medicine in King's College of London, has found that there is a connection between being neurotic and being highly creative.

In the paper "Thinking Too Much: Self-generated Thought as the Engine of Neuroticism," Perkins and his collaborators, Danilo Amone, Jonathan Smallwood, and Dean Mobbs, found that the driver for neurotic modes of thought was the tendency toward self-generated thought regarding threats.  And while this increase in threat sensitivity can be pretty unpleasant, it is also the source of the creative urge.

"Why should having a magnified view of threat make you good at coming up with solutions to difficult problems?" Perkins said, in an interview in TIME magazine.  "It doesn’t add up.  On one hand, it’s a clever theory—it shows the difficulty of holding down a dangerous job, for example—but on the other hand, it doesn’t explain why [neurotic people] tend to feel unhappy or why they’re more creative."

Perkins says he had his epiphany about the nature of the connection when he was attending a presentation by his collaborator, Jonathan Smallwood.  Smallwood studies the neuroscience of daydreaming -- and had just done an experiment where he placed subjects in an fMRI tube with no distractions or instructions.  Naturally, the subjects began daydreaming.  Afterwards, Smallwood asked the volunteers about the nature of their thoughts while they were in the tube.  The ones that had experienced more negative thoughts showed higher levels of activity in the medial prefrontal cortex -- a part of the brain related to imagination, memory, and creative thought.

"If you have a high level of activity in this particular brain area, then your mind wandering tends to be threat-related," Perkins said.  "[Smallwood] started describing how people whose minds wander are better at things like creativity, delaying gratification and planning.  He also talked about the way that daydreamers’ minds wander when they’re feeling kind of blue.  And my ears perked up."

So the capacity of the neurotic brain to dream up various scenarios that could result in tragedy is also apparently correlated with its ability to dream up ideas for art, writing, music, and other creative endeavors.  Makes sense, doesn't it?

All of which gives me some solace.  I just wish I could convince my brain that it's perfectly okay to come up with horrid ideas, but that (1) it'd be preferable if we could confine said horrid ideas to plot points for my next novel, and (2) there are better times to engage in such behavior than 2 AM.
Posted by Gordon Bonnet at 2:05 AM