I'm a little concerned that the next president of the United States might be either delusional or else an outright liar.

I know this statement probably has a lot of people shrugging.  We here in the United States have a long history of electing a colorful combination of the insane and the dishonest to public office.  But this is the first time in my memory that we have so many people seeking the highest office in the land who are proud to announce that they hear voices.

Let's start with Ben Carson, who last November told Christian Broadcast Network's David Brody that he felt the "fingers of god" pushing him to run for president.  He's been up front ever since that he's running because god has told him that's what he wants.  "I serve God, and my purpose is to please Him, and if God be for you, who can be against you?...  I am running for president because God grabbed me by the collar and asked me to run." 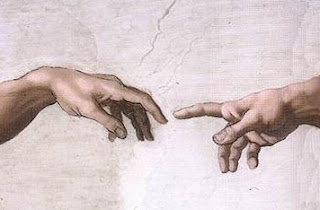 Pat Robertson concurred, and said that god sent him a personal message that Carson's the real deal:


God came to me in a dream. He had a white robe and a white beard, and told me our next president would be another colored man.  I’m interpreting that to be Dr. Ben Carson. Unless Barack Obama seeks a third term.

I wouldn't expect the Lord of Hosts to use verbiage that makes him sound like a bigoted white dude, but what do I know?

Then there's Mike Huckabee, who attributes his political support to... Jesus Christ:


There’s only one explanation for it, and it’s not a human one. It’s the same power that helped a little boy with two fish and five loaves feed a crowd of five thousand people.  That’s the only way that our campaign can be doing what it’s doing.  And I’m not being facetious nor am I trying to be trite.  There literally are thousands of people across this country who are praying that a little will become much, and it has.  And it defies all explanation, it has confounded the pundits.  And I’m enjoying every minute of them trying to figure it out, and until they look at it, from a, just experience beyond human, they’ll never figure it out. And it’s probably just as well.  That’s honestly why it’s happening.

Rick Perry also received a message from god that he should run for president:


And it has been an incredible outpouring and I can tell you that has given me the calmness in my soul that, you know, God sends messages through a lot of ways and through a lot of messengers... You may not see that burning bush, but there are people seeing that burning bush for you. I’m getting more and more comfortable every day that this is what I’ve been called to do.

Burning bushes notwithstanding, Perry decided on September 11 to throw in the towel.  Maybe it's just as well, given the mixed messages god's sending to everyone.

But no one sounded as sure that he has a direct phone line to to the almighty as Scott Walker, who went on record as saying:


My relationship with God drives every major decision in my life.  Each day I pray and then take time to read from the Bible and from a devotional named Jesus Calling.  As you can imagine, the months leading up to my announcement that I would run for President of the United States were filled with a lot of prayer and soul searching.  Here’s why: I needed to be certain that running was God’s calling — not just man’s calling. I am certain: This is God’s plan for me and I am humbled to be a candidate for President of the United States.

But in another startling change in the divine plan, Walker also called it quits, just four days ago.  I guess maybe god's calling of Scott Walker was a misdial.

I don't know about you, but why are so many people accepting of the fact that we have multiple candidates who will state outright that they hear voices?  It doesn't take a Ph.D. to recognize that if more than one person is claiming that god said they'd be the next president, they can't all be right.  In fact, the great likelihood is that all of them are either (1) lying, or else (2) insane.

It is a sorry state of affairs that we have come to a place where to succeed in politics, you have to pander to the ultra religious -- or else be one of them yourself.  I'm willing to believe that Walker and Perry might have just been saying what they thought their constituency wanted to hear; but there's no doubt about Huckabee and Carson, both of whom are avowed young-earth creationists.  In fact, just a couple of days ago, Carson proved that to be a brain surgeon, you don't necessarily have to be rational on any other topic:

The power of the Religious Right is even affecting Donald Trump, who recently said that the bible is his favorite book.  Pressed for details, though, he began to waffle a little.  "The bible means a lot to me," he said.  "but I don't want to get into specifics."

He later did say that his favorite bible verse was the part in Proverbs where god commands us "never to bend to envy," a passage that is laudable but unfortunately doesn't exist.  Maybe he was confusing the bible with his other favorite book, The Art of the Deal by Donald Trump.

I find myself watching this race with an increasing sense of horror.  How did we get to a place where a group of people who are, honestly, a minority of practicing Christians can wield such political clout?  I am a little aghast that to maintain credibility amongst the Republican powers-that-be, you have to state outright that you are experiencing what amounts to a psychotic break.

Oh, but these are the same people who claim that Christians in America are an embattled and persecuted minority.  So we're not talking about having a serious grasp on reality right from the get-go.

I live in hope that rationality will prevail, and whoever ends up left in the race by the time the serious campaigning starts will at least be sane.  Because what we're looking at right now is more akin to being forced to choose between the Mad Hatter and the March Hare.  And if that's what we end up with, I'm thinking of moving to Costa Rica.
Posted by Gordon Bonnet at 3:16 AM