There comes a point when caveat emptor just isn't enough.

I know that my general take on spurious claims has been that if people can't be bothered to learn a little science, then they deserve to be hoodwinked by the unscrupulous.  Heartless as it may seem, we all have a responsibility to exercise caution and rationality with respect to our own decisions.

But dammit, when a doctor gets on the public airwaves, and recommends all kinds of sketchy shit, there should be a way to stop him.

And for once, I'm not talking about Dr. Oz.  This time the Very Alternative Medicine Award goes to Dr. Joel Wallach, who basically thinks every human disorder is caused by a mineral deficiency.

The topic comes up because I was listening to the phenomenally wacky radio broadcast Coast to Coast AM, hosted by George Noory, and Dr. Wallach was a guest.  Mostly it was the usual fare, with Noory asking questions about how unhealthy Americans are and about cancer rates and the incidence of heart disease, and Dr. Wallach responding with bogus-sounding stuff about mineral deficiencies.  And then Noory started taking callers, and a woman called in and asked for Dr. Wallach's advice about how to treat what sounded like a genital yeast infection.

And Dr. Wallach recommended soaking a tampon in colloidal silver, and inserting it into her vagina.

Well, that got my attention.  And I'm thinking, "Wasn't there that guy who took so much colloidal silver that he turned his skin blue?"  So I looked it up, and I found out that yes, there was a man named Paul Karason who became convinced that colloidal silver was the answer to all of life's ills, and took so much that he developed argyria, a permanent discoloration of the skin.

To put it more succinctly if less scientifically: he went from a basically normal human being to looking like the love child of Papa Smurf and a zombie. 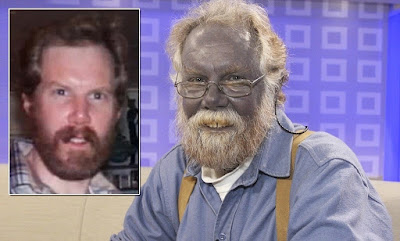 Now, to be fair, it's unlikely that one application of colloidal silver would result in problems, even if it is applied to your tender bits.  But I myself wouldn't do anything of the kind, even if I had the tender bits in question, which I don't.  Because to say that Dr. Wallach's claims are suspect turns out to be a mammoth understatement.

The wonderful site Quackwatch did a stinging exposé of Wallach a couple of years ago, especially apropos of his stance that "Americans are slowly starving to death" and the way to reverse the problem is by taking lots of colloidal mineral supplements (which, to no one's particular surprise, you can purchase from Dr. Wallach's company Youngevity).

Here are a few of his specious claims (there is more information on each in the Quackwatch article linked above):


Getting the picture here?  Add to this the fact that he has claimed to be the author of a medical textbook and over 70 peer-reviewed papers in medical journals (he isn't), and that in his training he did 20,500 human and animal autopsies (he didn't), and his veracity is definitely suspect.  (James Pontolillo, author of the Quackwatch piece, calculated that in order to perform that many autopsies, Wallach would have had to perform six a day, five days a week, 52 weeks a year, for twelve years.)

So I think you can see that we're dealing with someone here whose recommendations are pretty much uniformly unsupported by the evidence.  Personally, I think that Wallach's level of reliability is such that if he said the sky was blue and the grass was green, I'd want to go outside to check for myself.

And lest you think that Pontolillo just has some kind of axe to grind, Wallach has also been excoriated in The Skeptic's Dictionary, received withering and exhaustive rebukes from nutritionists Stuart Adams and Stephen Cherniske, and was outright called a "liar" both at the skeptical site The Millennium Project and in a publication by the National Council Against Health Fraud.

But the guy still has followers who revere him with near fanatical devotion.  Adams in particular has been attacked for his criticisms of Wallach -- he has stated that he is still getting hate mail for his exposé, which was released over ten years ago.

Which just goes to show how persuasive bullshit can be.  And it makes me wish there was some way to save people from their own gullibility.  I know you can't legislate against ignorance; but the fact that there are snake-oil salesmen out there who are taking advantage of people's fear about their health to rook them for millions of dollars is just not nice.

I suppose I should draw some solace from the fact that Wallach's credibility is now so low that he's appearing on Coast to Coast AM.  It's not like most of the stuff on that show is the pinnacle of rationality, after all.  I mean, the piece after Wallach's spot had to do with the "akashic record" -- the idea that every person who has ever lived, and every event that has ever happened, is still accessible through a universal quantum energy frequency vibrational field, or something.  So it's to be hoped that any listeners who were still on the fence were left chortling and saying "Yeah, right" after the show was over.

And that few of them were tempted to insert mineral-soaked tampons into their naughty parts.
Posted by Gordon Bonnet at 2:57 AM