Recently, we've looked at such topics as the ascribing of tragic accidents to god's will, the role of social media in spreading misinformation, and the ongoing controversy over Kim Davis's refusal to follow federal law in Rowan County, Kentucky.  But all of this has made it even more imperative that I take a moment to address a much more serious question that I'm sure is at the forefront of everybody's mind:

What's going on with werewolf sightings in Pennsylvania?

The word "werewolf" brings up different associations for different people, and those mental images are usually dependent on their age.  For people in my generation, the usual thought is of the guy in the camp-horror movie An American Werewolf in London: 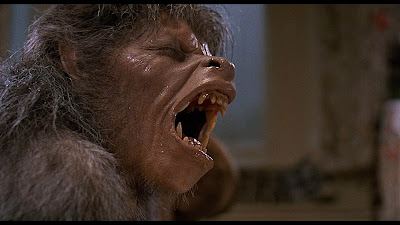 The creepy realism of this movie -- all in the days before CGI, allow me to add -- made it one of the most memorable scary films of the 1980s.

Younger people, of course, are more likely to think of a different depiction of a werewolf, exemplified by Taylor Lautner in Twilight.  Lautner's acting shows amazing emotional range, running the gamut from "brooding" all the way to "sullen."  He occasionally even manages "morose."  He also bears mention as the only actor in history who is better at finding bogus reasons for taking his shirt off than William Shatner. 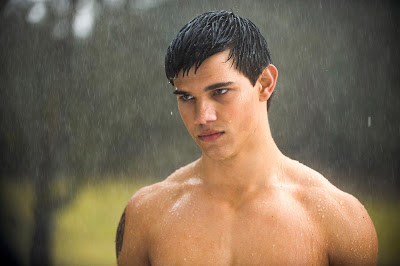 Anyhow, you can see that there is a huge variety of mental images that the word "werewolf" evokes.  So let's compare that to some recent sightings of "bipedal wolves" coming from Clearfield and Cambria Counties, in central Pennsylvania, shall we?

According to a report in Phantoms and Monsters, there have been three encounters in the past month with creatures that fall somewhere between American Werewolf and Twilight, placing them squarely in the range of what most of us would consider a werewolf.  The most recent was the most detailed, a report from a 42-year-old woman "of sober mind" who is "not prone to embellishing."  She was out walking her dogs a couple of weeks ago, she says, when the following happened:


I walked the dogs through the park and then decided I wanted to go around the block on the back side of the park.  There is a main road that runs along side of the front of the park and a dirt road that runs along the back side of the park.  The roads meet at a streetlight. I was on the main road and got within about 25 yards of the streetlight and there was a huge figure, about 7 feet tall I estimate.  It was standing just back from the light and I could see just the legs.  They were hair covered and bent backwards like a dog. I could not make out a face or other details as it was standing back...  The first thought I had was "oh shit, that is a big damn dog" and then it dawned on me what I was seeing.  My next thought was "it is a freaking werewolf"!!!  It was rocking side to side like it was waiting for us to get closer.

Her dogs, interestingly, didn't seem to notice the thing, but she yanked on their leashes and hauled ass back home.

Which turns out to be the last sensible thing she did.  Because the next night, she thought the best possible course of action would be to walk her dogs again...


I got to within 150 feet of where I saw this thing and my chihuahua started growling and all of his hair was standing up.  He started barking and going in circles looking for what ever it was that he sensed. No reaction at all from the pit.  She is feisty and not afraid to fight intruders so that really surprised me.  About the same time the little dog was freaking out there was a HUGE crash in the woods next to us, maybe 10 yards away of so.  This area is very swampy and there are quite a few large bushes and trees.  This crash sounded like a tree falling, but like it fell instantly.  It was lound [sic], fast and instant.  I ran out of there so damn fast.  I did not see anything this time other than my dog freaking out and the large crash.

She then goes on to describe how when she let her dogs out the next morning, they both ran up to a particular spot on the back yard fence, and were acting "very agitated and almost scared," and were "growling, with their hair standing up."  The werewolf, she surmises, followed her home, and is now lurking out there somewhere near her house.

All of which brings to mind the fact that I would be a great person to have on your side if there was a real werewolf in the area.  At the first sign of snarling and howling, I'd piss my pants and then have a stroke, giving the werewolf someone to attack who was already incapacitated, and allowing you to escape.

Because I may be a skeptic, but I'm also a great big wuss.

In any case, that's it, evidence-wise, for the Pennsylvania werewolf.  No hair, no tracks, not even a photograph, only a trio of anecdotes.  So as spooky as they admittedly are, I'm not ready to label this one a verified sighting.

On the other hand, if you live in rural central Pennsylvania, you might want to exercise some caution when you're out walking at night.  Safety is the priority, and we don't want anyone getting mauled to death, which seems to be the usual approach werewolves have toward defenseless humans.  Unless it's Taylor Lautner, who would only stare glumly in your general direction, and then take his shirt off.

Which is preferable, but not by much.

Posted by Gordon Bonnet at 2:30 AM