The cult of personality

The cult of personality is a dangerous thing.  Whenever a person's brand becomes more important than what (s)he is claiming, there's the chance that herd mentality will take over -- and you'll follow the leader without question.

Dr. Oz.  Oprah.  "Food Babe."  And, most spectacularly, Deepak Chopra, who regularly publishes something called -- and I am not making this up -- the "Chopra-centered Lifestyle Newsletter," which should win some kind of Narcissistic Title Award.  Because I regularly check out the publications and claims of these people -- risking the loss of countless innocent brain cells -- I have more than once seen comments like, "We love you, Dr. Oz!" and "Go Food Babe Army!" appended to articles that would leave any sensible, scientifically-literate person doing repeated facepalms.  I'm left with the unsettling impression that these people could claim that you can prevent cancer by eating red onions, and their audience would simply sit there nodding and smiling.

But Chopra is in another league.  This guy has made millions writing book after book of quasi-mystical, pseudoscientific bullshit, and he's as popular as ever.  His followers have a devotion to him that borders on fanaticism.  He still does the lecture circuit to sold-out auditoriums.  And this despite the fact that what he says is so vague and fact-free that someone made a Random Deepak Chopra Quote Generator that produces convincing-sounding Chopra-isms on demand.  (Here's the one I got:  "The invisible is the womb of visible choices."  I feel myself becoming wiser already.) 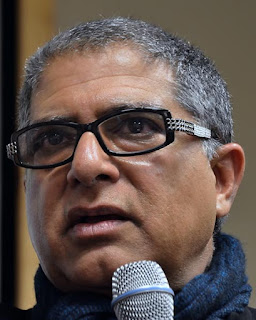 As an example of the bizarre, fact-free clickbait that Chopra dishes out, consider the recent article on his website called "What is Primordial Sound Meditation?" in which we find out that we each have a personal "mantra or sound" that if we chant it, will bring us "profound peace and expanded awareness."

How do we find out what our personal mantra is?  Well, the implication is that such information isn't available to most of us unenlightened slobs, so we have to sign up for "Chopra's Primordial Sound Meditation Workshop" at the "Chopra Center."  Once we do, they'll tell us what to chant.

Money first, enlightenment next, that's the motto over at the "Chopra Center."

And it's not just some random noise, they tell us:


A mantra is a specific sound or vibration—which when repeated silently—helps you to enter deeper levels of awareness...   The mantra you will receive is the vibration the universe was creating at the time and place of your birth, and it is calculated following Vedic mathematic formulas.

So what he's done is taken three pieces of mystical nonsense -- astrology, numerology, and New Age woo -- and combined them to make an all-new Bullshit Mélange.  We also have one of our favorite words, "vibration," which of course makes it even more scientific.  All we need is "quantum" and "frequency" and we'd be all set.  (They didn't show up in the article, but I'd be willing to bet you my next month's salary that they're used in the workshop.)

And what will happen if you use your magic personal mantra?  All sorts of good stuff:


When you silently repeat your mantra in meditation, it creates a vibration that helps you slip into the space between your thoughts, into the complete silence that is sometimes referred to as "the gap."  Your mind is no longer caught up in its noisy internal chatter and is instead exposed to its own deepest nature: pure awareness.

Now, don't get me wrong; I'm completely in favor of meditation.  It is great for relaxation and reducing stress.  And there's no doubt any more that stress is contributory to poor health, so anything you can do in the way of decreasing it is probably going to do you nothing but good.

But saying "you'd probably feel better if you did some meditation" is different than making bogus claims about universal vibrations at the moment of your birth creating a Special Sound Just For You, and then telling you that you can only find out what it is if you sign up for an expensive workshop.  What Chopra et al. are doing is nothing more than a calculated, callous campaign of using people's ignorance about science, and anxiety over their health, to make money hand over fist.

And it works.  Chopra, Oz, Food Babe, and the rest are as popular as ever, despite study after study debunking their wild claims.  "Food Babe" was roundly ridiculed a few months ago for her claim that airlines were trying to kill us by pumping "impure air" into airplanes that "was not pure oxygen."  Dr. Oz, especially, has come under significant fire, receiving a harsh rebuke last year from the Senate Subcommittee on Consumer Protection for his support of sketchy diet recommendations.  And earlier this year, a group of prominent doctors sent a scalding letter to Columbia University's College of Physicians and Surgeons demanding that Oz be fired from his faculty position there, citing "an egregious lack of integrity."

But none of that seems to make much of a dent in their popularity.  They're still out there, still making ridiculous claims lo unto this very day, still bringing in money hand over fist.

Leading me to the troubling conclusion that however persuasive science is, it will never wield the power that the cult of personality does.

Posted by Gordon Bonnet at 2:51 AM