Okay, I'm willing to admit that I take a fairly prosaic, practical view of the world at times.

That's not to say that I can't be awestruck by nature.  I've been many places that are breathtakingly gorgeous, most recently coastal Cornwall and Devon.  And the stunning beauty of many plants and animals is what led me to study biology, and ultimately, to share that joy with 29 years' worth of high school students (and counting).

But fer cryin' in the sink, let's keep in mind that however beautiful nature can be, it's not called "wild" for nothing.  When I was in Yellowstone in summer of 2014, my enjoyment of watching elk, bison, and bears was tempered by the knowledge that if I were to approach any of them too closely, those lovely and majestic animals would have without hesitation turned me into Hamburger Helper.

This is an awareness that many people apparently lack.  Not only is there the bizarre attitude that we saw all too often in Yellowstone -- that nature is some kind of Global Petting Zoo created for the entertainment of humanity -- there is a weird quasi-pagan belief system that is experiencing a resurgence lately, and which is leading people to do things that are, in a word, idiotic.

This all comes up because of a link sent to me by a loyal reader of Skeptophilia in which we find out that an Atlanta, Georgia woman is planning on having a "dolphin-assisted birth," an idea that stupidity-wise, ranks right up there with the guy who put his two-year-old on the back of an elk in Yellowstone two weeks before we arrived for a cute photo-op.  The elk bucked and kicked the man, killing him instantly.  (The child, fortunately, was unharmed.)

But such pragmatic reasons for treating wild animals as what they are seem to have no impact on "spiritual healer" Donna Rosin and her partner, Maika Suneagle.  "Dolphins are kind and healing creatures," Rosin said.  "In 2011 and 2014 I had the privilege to learn from and with wild and free dolphins and humpback whales in Hawaii who transformed and healed me in a very profound way.  I felt deeply called to spend two times three months in nature – mostly by myself – and to deeply connect to this magical place of beauty and transformation inside and outside which called me home." 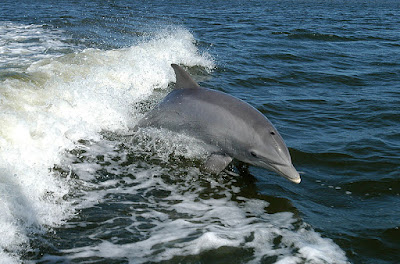 Which is all lovely and spiritual, but ignores the reality that dolphins, like many large mammals, can kill.  They have not only been recorded as killing other animals -- not, apparently, for food or defense, but because of an innate drive to attack -- but there is good evidence that they sometimes kill infants of their own species.  Such behavior appalls many humans, especially those of us who like to anthropomorphize animals and give them something like human motives, but it is by no means limited to dolphins.  Male lions will unhesitatingly kill cubs fathered by their competitors, the probable evolutionary driver being that such actions trigger the females to go into estrus again, increasing the likelihood of the killer male passing along his own genes to the next generation.

So Rosin's idea of having a dolphin "help her give birth" is one of those ideas that could go severely wrong in any number of ways.

Oh, and did I mention that Rosin and Suneagle believe that if their baby is born this way, it will know how to "speak dolphin?"

Fortunately, I'm not the only one who thinks this is ridiculous.  "This has to be, hands down, one of the worst natural birthing ideas anyone has ever had," wrote science journalist Christie Wilcox in a 2013 article on the practice in Discover.  "Dolphins have been known to toss, beat, and kill other mammals for no apparent reason despite enjoyment.  Is this an animal you want to have at your side when you’re completely vulnerable?"

Apparently, the answer is yes, if you believe in the whole Spirit Animal thing and have zero actual understanding of biology.  After all, even Tennyson, who often waxed rhapsodic about the beauty of the natural world, penned the line, "Nature is red in tooth and claw."

So, there you have it.  The latest in the Truly Awful Ideas department.  But I guess it could be worse.  At least Rosin doesn't want to have a grizzly-bear-assisted birth.  Here, at least there's the chance that the dolphins will go, "Oh, man, another stupid human.  Let's blow this popsicle stand and go find some fish to eat, okay?" and take off.  Because Spirit Animal or no, deliberately approaching a grizzly bear is just asking to have your name put in for a Darwin Award.
Posted by Gordon Bonnet at 2:25 AM