The end of the world as we know it

I hate to be the bearer of bad news, but we're all gonna die.

Sorry if that's kind of a downer of a way to start your morning.  But it's best to face facts, you know?

Some time in the next week, according to multiple sources, god is going to play a game of cosmic Whack-a-Mole with the Earth.  Never mind that none of those sources have any apparent understanding of astronomy, nor necessarily even contact with reality.  Just believe 'em anyway, because what do those cocky fancy-pants scientists know, anyway?

First we have Pastor John Hagee, whose motto is "Jesus accepts MasterCard."  This guy has made a career out of passing along the cheerful message that god thinks we're all sinners and we're doomed to the fiery furnace and the only way to escape our (well deserved) fate is if we make a generous donation to John Hagee Ministries so that John Hagee can purchase another Yacht for Christ.  (Why Christ needs a yacht remains to be seen.  Didn't the dude walk on water?)

This time, though, god is serious, and he's going to show us how pissed he is at our iniquity through an unequivocal sign: a lunar eclipse this Sunday.  Or, as Hagee likes to put it, a "blood moon."  Because the moon turns kind of red during an eclipse, which means blood.  And god and prophecy and hell and all the rest, so you damn well better give generously, or else. 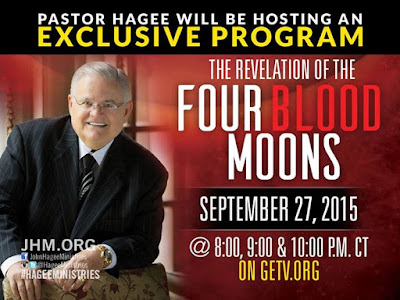 Is it just me, or does Pastor Hagee look really... happy about the whole thing?  You get the impression that here's a guy who is just thrilled that Rivers Will Run Red With The Blood Of Unbelievers.  After all, the unbelievers don't donate to John Hagee Ministries, so fuck 'em, right?

But it isn't just Hagee saying that we're in trouble.  A lot of folks down in Costa Rica are up in arms over the appearance a couple of days ago of a weird cloud, because there's obviously no other explanation for this other than the imminent end of the world. 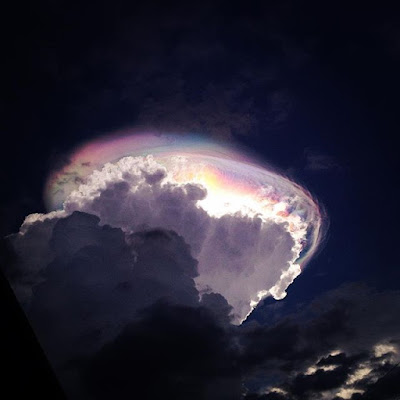 Eladio Solano, meteorologist at Costa Rica's National Meteorological Institute, said the phenomenon is rare but perfectly natural.  The iridescence, he says, is caused by the refraction of light through high ice crystals in the atmosphere, and has happened before without the world ending.  But what does he know?  He's just a scientist.  We all know it's better to get your information from superstition based on a Bronze-Age understanding of the universe.

Then we have the fact that the physicists over at CERN are firing up the Large Hadron Collider today, and the rumor has started that they're trying to "recreate the Big Bang."  The result will be that the new Bang will rip the current universe apart from the inside out.  And/or create a black hole.  Either way, we're pretty much fucked.

Because that's what all scientists are after, right?  When they're not busy distracting you from the actual meaning of weird clouds over Costa Rica, they're plotting to destroy the world.  Why else would they have gone into science?

And if that wasn't enough to ruin your morning, add to that the fact that Mercury goes into retrograde starting on Thursday.  And this means that all hell is going to break loose on Earth, even though (1) it's only an apparent backwards movement because of the relative motion of Mercury as seen from Earth, (2) the movement of a planet against a backdrop of impossibly distant stars has zero to do with anything happening down here, and (3) Mercury goes into retrograde three times every year, and the world hasn't ended any of those times.

But never mind all that logic and rationality stuff.  This time it's gonna happen.  Blood moons + weird clouds + LHC + Mercury retrograde = really bad shit.  You don't have to be a rocket scientist to understand that.

In fact, it's better if you're not a scientist at all.
Posted by Gordon Bonnet at 2:23 AM