The perils of indoctrination

Can I clarify something here?

Learning about something is not the same as learning to believe in it.

As an example, in an introductory political science class, I would undoubtedly study communism.  I might even read Karl Marx's The Communist Manifesto and Das Kapital.  This does not mean that I now have no choice but to become a raving communist, ready to leave behind capitalism and go to North Korea to join in the worship of Dear Leader.  In fact, it could well have the opposite effect; my reading of those books might leave me thinking, "This is all bullshit."

Or I might decide that it sounds right.  It could go either way.  The point is, having been exposed to the communist school of thought means I have the choice of making up my own mind -- provided I have been given enough tools of rational evaluation to decide what makes the best sense.

This is a point that has evidently escaped Fox News commentator Todd Starnes and evangelical pastor Greg Locke, both of whom have gone public in the last couple of days with statements that any inclusion of material about Islam in public school curricula amounts to "indoctrination."  Locke went even further, saying that Christian parents need to see to it that their children completely refuse to participate.

"You need to tell your kids, ‘Take an F for the class,’ Locke said.  "Because I’d rather fail in man’s class and get an A+ in God’s class.  And we need to have some kids that have some character, that stand up.  Because we do not serve the god of the nation is Islam [sic].  We do not serve Allah."

Starnes said parents are up in arms, too.

"'I am not pleased that my 12-year-old was taught the Islamic conversion prayer,' parent Brandee Porterfield told me," Starnes wrote in an op-ed piece.  "Joy Ellis was a bit fired up, too.  She discovered the Islamic lessons after examining her daughter’s class work.  'I was very angry that my child, my Christian child, was made to profess that Allah was the only God,' she told me."

"Could you imagine the outcry from liberal activists if the students had been forced to write 'Jesus is Lord'?" Starnes went on to say. 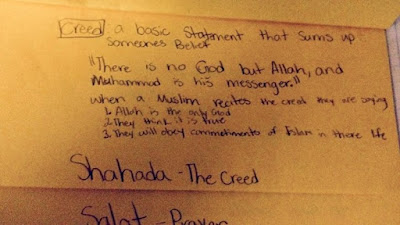 [Students will be able to ] describe the origins and central features of Christianity...

I wonder what credence these people would give to an Islamic family who complained about the sixth-grade curriculum and claimed it was "Christian indoctrination?"

Locke then followed Starnes into the Unintentional Irony Zone with the following statement:

So not only are Starnes and Locke lying about the facts, what they're saying is untrue on a deeper level.  Learning what the Islamic conversion prayer says is not the same as declaring that it represents the truth.  In a good social studies curriculum, children are taught about a great many political, social, and religious systems, and they grow to see how those institutions have shaped human history.  The point isn't conversion, the point is broadening of the mind.

And really, how likely is it that one unit of a forty minute social studies class in elementary school is going to profoundly alter a child's religious beliefs?  Consider how many students have been exposed to Greek mythology -- Zeus, Hera, Athena, and the rest of the lot -- during their school careers.

How many of these students then went on to spend the rest of their lives sacrificing goats to Apollo in their back yards?

Once again, you have to wonder what they're so afraid of.  Are their children so weak in their beliefs that even learning about Islam is sufficient to make the whole house of cards come crashing down in ruin?  Or do they fear that Islam is, at its heart, more attractive than Christianity?  Or that any opening of the mind provides a gap through which Satan might leap?

Whichever it is, their demands that schoolchildren not be exposed to other cultures and other belief systems comes at a cost.  Deprived of any knowledge of beliefs outside of their own will result in another generation of narrow-minded, paranoid bigots, living in a little circle of their own fearful certainty, not even wanting to admit that any ideas different from their own might be worth knowing.

And that, honestly, might be what Starnes and Locke are really trying to accomplish.
Posted by Gordon Bonnet at 2:35 AM