The return of the faith healer

Following hard on the heels of my post suggesting that caveat emptor is all well and good, but there should be a way to stop swindlers from rooking gullible people, I ran across a story that pushes me squarely in the opposite direction.

There are people who are so gullible that no amount of rationality will persuade them, and honestly, these people probably deserve everything they get.

The story came to my attention via Sharon Hill's wonderful site Doubtful News, and concerns veteran snake oil salesman and purported faith healer Peter Popoff.  Popoff goes back a long way; over thirty years ago, he had a nationally-broadcast faith healing show, during which he would call up audience members for a "laying on of hands" and would scream, "I heal you by the power of Jesus!"  He claimed to make paralyzed people walk, cured sufferers of cancer and chronic pain, and attracted standing-room-only crowds, many of whom paid hundreds of dollars for a ticket to attend. 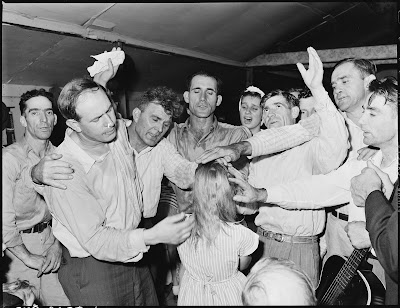 The whole house of cards came crashing down around Popoff after an investigation by James Randi and his associate Steve Shaw.  Some of the dreadfully ill audience members that Popoff healed, it was found, were perfectly healthy people that Popoff and his crew had planted in the audience to give the appearance of miracles.  His knowledge of people's medical conditions ahead of time turned out to be messages delivered not by the voice of god, as Popoff claimed, but by the voice of his wife Elizabeth, who was scanning audience information cards submitted upon arrival and sending the details to Popoff via a wireless earpiece.  (Amongst the not-so-divine messages Popoff got caught receiving was a reference to an African American audience member by a racial slur, followed by the warning, "keep your hands off her tits... I'm watching you.")

After these revelations, the donations dried up, the audiences stopped showing up, and in 1987 Popoff declared bankruptcy, leaving over 790 creditors unpaid.

And that, you would think, would be that.

But no.  After a humiliating takedown that would leave most of us unwilling to go outside ever again without wearing a paper bag over our heads, Popoff has restarted his "healing ministries," this time in the UK.  According to a piece over at the site Good Thinking, we find out that he's once again raking in the cash:


Over the last six months, we have been investigating ‘faith healer’ Peter Popoff and his highly-lucrative current business of promising to heal sickness and cancel debts in exchange for ‘seed faith’, in other words: cash donations.  In May of this year we attended Popoff’s event at The Troxy Theatre, London, to covertly record his miraculous claims and supposed acts of faith healing, and to witness thousands of people donating large amounts of cash to his ministry.

The Daily Mirror did a story a couple of days ago about the investigation, and called it correctly:


Is the old charlatan “Reverend” Peter Popoff returning to his wicked ways?

The American snake oil salesman has been in the UK, churning out begging letters and holding a rally to heal the sick.

Among those “cured” at the latest London gathering was a woman who said her body was wracked with pain.

Popoff laid his hands on her and yelled “Back to the pits of hell,” apparently with remarkable results. But was it all it seemed?

Among the audience members was Michael Marshall of the Good Thinking Society, a charity that promotes rational debate.

“The woman he ‘healed’ had a convulsive fit when he touched her on the head,” said Michael.

“But she seemed to be part of his team, she was handing out pens and a questionnaire at the start, which leads us to believe that it is possible she was a plant.

“If she was part of their team, they should have been open about this, but just before the ‘healing’ she came out of a row of seats in the auditorium as if she was just another member of the audience, and left soon afterwards.”

In other words: Popoff is once again rooking audiences, using exactly the same techniques as he did before.

I find it hard to believe that anyone could fall for his schtick, after the events of thirty years ago.  Did god forgive him for his earlier transgressions, and now he's actually healing people through divine power?  Or was James Randi persecuting an innocent man, leading us to the uncomfortable conclusion that god told Popoff "keep your hands off her tits?"

Or is he a cheater and a fraud who was so successful the first time that he is banking on people having short memories and more money than sense?

I'm pretty much certain it's the latter.

So we're looking at a situation where a proven swindler has returned to swindling, and people are once again falling for it.  Which returns me to my original point; if you are taken in by people like Popoff, as harsh as it sounds, you are so foolish that you deserve everything you get.
Posted by Gordon Bonnet at 2:22 AM