A Comprehensive Field Guide to Aliens

That people believe all sorts of weird things without any hard evidence is so obvious as to barely merit saying.  What never fails to astound me, however, is how complex some of these beliefs are.

Witness the website that a loyal reader of Skeptophilia was kind enough to send me, which gives information about all of the different alien races that are currently visiting Earth.  Me, I thought there were only a couple -- the bug-eyed gray guys featured on various historical documentaries (for example, The X Files and Close Encounters of the Third Kind), and the shapeshifting reptilian dudes called the Annunaki that are the favorites of conspiracy theorists.  These last have supposedly infiltrated world governments, and many prominent human leaders have been replaced by heartless, cold-blooded scaly extraterrestrials, bent on world domination.  Apparently the trained eye can still recognize which are the real humans, and which are the Annunaki replacements.  Personally, I'm suspicious about Arne Duncan.  Doesn't he look a little like someone who has only recently learned the rule, "when you smile, raise your lips and expose your teeth," and still can't quite manage to make it look authentic? 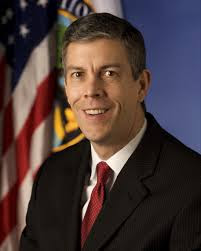 [image courtesy of the Wikimedia Commona]

In any case, imagine my surprise when I learned that the bug-eyed gray aliens and the Annunaki are only two of a whole petting zoo's worth of different alien species.  And I'm not talking about your typical Star Trek type alien, who looks like a guy speaking in a fake Russian accent while wearing a rubber alien nose.  I'm talking some serious non-humans here.

For example, consider the Arcturians.  These guys are only three feet tall, but are super-powerful, telekinetic aliens with turquoise skin, enormous almond-shaped eyes that are entirely glossy black, and only three fingers per hand.  Visiting Earth is rough for the Arcturians because "Earth's vibrational energy is harmful to their fifth-dimensional frequency."  Whatever the fuck that means.  But that's apparently why you see so few of them around.

Then, there are the Dracos, who hail from, amazingly enough, the constellation Draco.  Even more coincidentally, they look kind of like dragons.  While I was reading this, I started talking to my computer.  "You... you can't be... from a CONSTELLATION!" I yelled, waking up my IQ-challenged hound, Lena, who gave me a head-tilt to communicate the one coherent thought she is capable of, namely, "Derp?"  "A constellation is a random assemblage of stars!  And Draco only looks vaguely like a dragon if you see it from this vantage point!  From somewhere else in space, it would look ENTIRELY DIFFERENT!"  Then I had to go get a cup of coffee and calm down for a while, and give Lena time for her lone functioning brain cell to go back to sleep.  So perhaps we should just move on.

Then there are the Els, or Anakim, which is a race of giant red-haired humanoids, who "ran the Garden of Eden" and built the pyramids.   And when I say "giant," I do mean seriously height-enhanced.  Some of them, this website claims, were 250 feet tall.  The description of the history of the Els on this website runs to several pages, and I won't even attempt to summarize it, except to mention that it involves Scotland, the Jews, the Templars, the Merovingians, L. Ron Hubbard, the Masons, J. R. R. Tolkien, the Three Wise Men, and clams.  It's worth reading.  I recommend doing it while drinking single-malt scotch, which would have the effect of making it a lot funnier if not substantially more sensible.

Then we have the Ikels, which are like little hairy humans with cloven feet.  The Ciakars, or Mothmen, one of whom was featured in the historical documentary Godzilla vs. Mothra.  The Pleaidians.  The Hyadeans.  The Cetians.  The Orions.  The Lyrans.   The Weasel-People of Wahoonie-3.

Okay, I made the last one up.  But really... it's no weirder than their actual claims.  The people who wrote this website obviously believe it all; it has none of the hallmarks of a spoof.  It's full of links to pages describing how various malevolent aliens are plotting to take over Earth, with intricate details of which alien races are in league with which, who might tentatively be on our side, which ones have already established bases on Earth, and so on.  You have to wonder if the people responsible for this are simply paranoid and delusional -- which, as a mental illness, I can have some sympathy for -- or if they are making the whole thing up to see how many people they can bamboozle.  (Speaking of L. Ron Hubbard...)

Sad to say, I've known people who actually believed in alien conspiracies, so the idea of someone falling for this nonsense is not as outlandish as it may seem.  And as I've commented before, once you've accepted that there's a Big Scary Evil Conspiracy, everything afterwards is seen through that lens.  My attempts to convince the alien believers that what they were claiming was complete horse waste were met with very little success.  In fact, afterwards, I sort of sensed that they acted a little suspicious of me -- as if my arguing with them just proved that I was in alliance with the aliens.

Or maybe... that I am an alien.  My AP Biology students are certainly suspicious in this regard, given that the summer reading assignment this year had to do with the possibility of life on other planets.  More than one of them speculated that I'd given the assignment only because I had a lot of knowledge base to work from, being an extraterrestrial myself.

I wonder which kind I am?   I don't want to be a little turquoise guy, and the reptilians are becoming a little passé, frankly.  Maybe I could be a Horlock, which are sort of like the Men in Black.  I look good in black.  Besides, they can disappear at will, and alter people's memories, which seem like pretty damn cool superpowers to have.
Posted by Gordon Bonnet at 2:42 AM