A recent study at UCLA has both atheists and the religious buzzing.

A paper called "Neuromodulation of Group Prejudice and Religious Belief" describes research at UCLA by Colin Holbrook, Keise Izuma, Choi Deblieck, Daniel M. T. Fessler,  and Marco Iacoboni, and appeared  in the journal Social Cognitive and Affective Neuroscience last week.  And what it seems to show that down-regulating part of the brain can decrease both bigotry and religious belief.  Here's how Holbrook et al. describe their research:


People cleave to ideological convictions with greater intensity in the aftermath of threat.  The posterior medial frontal cortex (pMFC) plays a key role in both detecting discrepancies between desired and current conditions and adjusting subsequent behavior to resolve such conflicts.  Building on prior literature examining the role of the pMFC in shifts in relatively low-level decision processes, we demonstrate that the pMFC mediates adjustments in adherence to political and religious ideologies.  We presented participants with a reminder of death and a critique of their in-group ostensibly written by a member of an out-group, then experimentally decreased both avowed belief in God and out-group derogation by down-regulating pMFC activity via transcranial magnetic stimulation.  The results provide the first evidence that group prejudice and religious belief are susceptible to targeted neuromodulation, and point to a shared cognitive mechanism underlying concrete and abstract decision processes.  We discuss the implications of these findings for further research characterizing the cognitive and affective mechanisms at play.

My sense has always been that who we are -- our beliefs, personality, fears, desires -- are a result of the interplay between electrical and chemical processes in our brains.  Change those processes, and who we are changes; the idea that our selves are somehow static, independent, unchanging whatever happens to our physical body, is simply not borne out by the evidence. 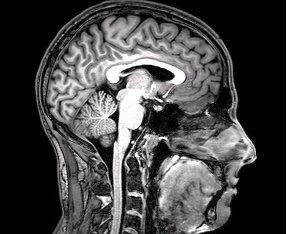 But this still strikes me as a weird result.  Measuring a complex phenomenon like the strength of a person's religious belief isn't going to be easy; we don't have a ReligioMeter that points to 99.8 when you attach it to Pope Francis and 0.2 when you attach it to Richard Dawkins.  Any measurement of the intensity of belief has to be determined by self-reporting, which can be influenced by any number of things -- up to and including the tone of voice in which the researcher asks the question.  Here's how Holbrook et al. did it:

Which seems like a pretty simplistic measure, if you're looking for a subtle result.  Add to this the fact that there were only 38 participants, and the scale change for subjects treated with TCMS showed a statistically insignificant reduction only in their positive religious beliefs, and you have to wonder what all the hype is about.  Might it be that TCMS is simply affecting your emotional state?

Now, I'm not saying it isn't an interesting result.  Certainly, the effect on prejudice (which was greater) is fascinating in and of itself.  But both religious and atheist media are giving the impression that "if you turn off part of the brain, you lose your religious convictions," and each crowing about it for different reasons, and both seem not to have read anything more than the abstract of the paper itself.

If there's one thing that becomes clear when reading psychological research, it's that isn't simple.  We're only at the very beginning of understanding how the brain works.  That there exists a neurological underpinning to religiosity seems very likely -- just as there's almost certainly a neurological underpinning to believing in conspiracy theories.  It's just that we don't know what it is yet.

And the idea that we can now turn such beliefs on or off with a switch is entirely premature.
Posted by Gordon Bonnet at 3:40 AM