How often have you heard a friend mention an odd characteristic of a mutual acquaintance, and follow it up with a statement like, "Well, he's a middle child," leaving you both nodding knowingly as if that explained it?

Conscientious, strong-willed eldest children.  Lost, rebellious middles.  Immature, demanding youngests.  Then there's my situation -- the spoiled, tightly-wound only children, who were doted upon by their parents and had their every whim met immediately.

I know that wasn't really true in my case; far from being overprotected, my youth was more a case of free-range parenting.  After school, and all summer long, my parents' style could be summed up as "Be back by dinner and try not to break any bones.  Either yours or anyone else's."  So I knew that at least from a sample size of one, there was something wrong with the birth-order-determines-personality model. 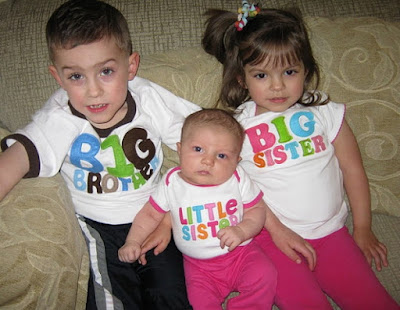 Even seeing other exceptions here and there never left me confident enough to contradict the prevailing wisdom.  After all, the plural of anecdote is not data.  But now a pair of studies has conclusively disproven the connection between birth order and... anything.

In the first, a trio of psychologists at the University of Leipzig analyzed personality assessments for a huge sample size (they had data for over 20,000 individuals), looking for how they scored on what are called the "Big Five" features of personality -- extraversion, emotional stability, agreeableness, conscientiousness, and imagination.  They found no correlation whatsoever between birth order and any of those.  In their words:


[W]e consistently found no birth-order effects on extraversion, emotional stability, agreeableness, conscientiousness, or imagination.  On the basis of the high statistical power and the consistent results across samples and analytical designs, we must conclude that birth order does not have a lasting effect on broad personality traits outside of the intellectual domain.

A similar, but much larger study done at the University of Illinois -- this one of 377,000 high school students -- also found no correlation whatsoever:


We would have to say that, to the extent that these effect sizes are accurate estimates of the true effect, birth order does not seem to be an important consideration for understanding either the development of personality traits or the development of intelligence in the between-family context.  One needs only to look at the “confounds,” such as parental socio-economic status and gender, for factors that warrant much more attention given the magnitude of their effects relative to the effects of birth order.

So if there really is nothing to the birth-order effect, why is it such a persistent myth?  I think there are two things going on, here.  One is that during childhood, older children differ in maturity from their younger siblings because... well, they're older.  Of course a fifteen-year-old is going to be more conscientious and articulate than his seven-year-old brother.  There'd be something seriously wrong if he weren't.  So we tend to see any differences that exist between siblings and interpret them in light of the model we already had, thus reinforcing the model itself -- even if it's wrong.

Because that's the second problem -- our old arch-nemesis confirmation bias.  Once we think we know what's going on, our confidence in it becomes unshakable.   I have to wonder how many people are reading this post, and thinking, "Yes, but for my own kids, the birth-order effect works.  So I still believe it."  It's a natural enough human tendency.

On the other hand, I think you have to admit that your own personal family's characteristics really aren't going to call into question a scholarly analysis of 377,000 people.

So that's pretty much that.  No more blaming your appreciation of fart jokes on being an immature youngest child.  And my friends and family will have to cast around for a different explanation for why I'm as neurotic as I am.  There probably is an explanation, but my being an only child isn't it.
Posted by Gordon Bonnet at 2:14 AM