I've always been curious about why politicians spend so much time trying to make their constituencies afraid.

A scared person, you would think, is likely to behave unpredictably.  Faced with a raging tiger, some of us would run, some fight back, some piss their pants and faint.  (I suspect I'd be in the last-mentioned group.)  But the point is, you'd think that as a political strategy, making people fearful would backfire as often as not.

But it seems to be all you hear these days.  "Obama is coming for your guns, to leave you defenseless."  "The illegal immigrants are stealing our jobs."  "The economy is going to crash."  "Public schools are failing."  "The terrorists are winning."

A study released last week in the Proceedings of the National Academy of Sciences may give us a perspective on why that is.  In a paper called "Power Decreases Trust in Social Exchanges," by Oliver Schilke, Martin Reimann, and Karen S. Cook (the first two from the University of Arizona, the last from Stanford University), we find out that being low in the power structure makes people more willing to trust authority:


How does lacking vs. possessing power in a social exchange affect people’s trust in their exchange partner?  An answer to this question has broad implications for a number of exchange settings in which dependence plays an important role...  Over a variety of different experimental paradigms and measures, we find that more powerful actors place less trust in others than less powerful actors do.  Our results contradict predictions by rational actor models, which assume that low-power individuals are able to anticipate that a more powerful exchange partner will place little value on the relationship with them, thus tends to behave opportunistically, and consequently cannot be trusted.  Conversely, our results support predictions by motivated cognition theory, which posits that low-power individuals want their exchange partner to be trustworthy and then act according to that desire.  Mediation analyses show that, consistent with the motivated cognition account, having low power increases individuals’ hope and, in turn, their perceptions of their exchange partners’ benevolence, which ultimately leads them to trust.

Scary result, isn't it?  The politicians have a vested interest in making us fearful not only to push a particular political agenda; they make us more likely to blindly trust whoever is saying, "... and I have a solution."

And look what it does to our ability to process facts.  We are told that social programs (read: welfare cheats) are bankrupting the United States, and the way to balance the budget is to end what opponents like to call "entitlements," when the actual situation looks like this: 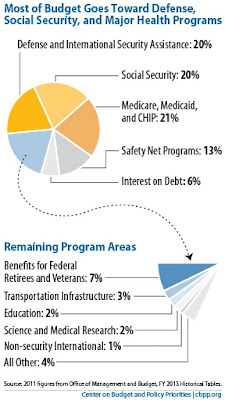 I'd like someone to explain to me how we can balance the budget by eliminating social services, when social services account for only around 13% of overall expenditures.  In fact, you could argue that our disproportionate military spending -- 718 billion dollars, 20% of the federal budget, accounting for 41% of the military spending worldwide, and four times higher than the country in second place (China) -- is also motivated by fear and a perception of being in a precarious position in the power structure.

It's amazing how blind you become to reality when you're motivated by fear and anxiety.  Remember the idiotic thing that was going around last year, about how we should balance the budget by eliminating salaries for the president, vice president, and members of congress?   Apparently scared people also really don't understand math, because I fail to see how stopping the paychecks of 537 people is going to offset a $426 billion budget deficit.

So if fear accomplishes one other thing besides making you trust whoever you believe to be an authority, it makes you ignore all the evidence to the contrary.  Consider the conviction with which the pro-gun faction believes that gun ownership makes you safer -- while a Boston University study found two years ago that there is a "robust correlation" between the rate of (legal) gun ownership in a state and the rate of violence.

But instead of reasoned debate on the topic, just about all we see is inflammatory rhetoric.  Since when is "Passing laws restricting gun ownership is stupid, because criminals don't obey laws" a logical argument?  No one is suggesting that we make rape and murder legal, because after all, "rapists and murderers don't obey laws."  These sorts of statements aren't meant to engage your brain; they're meant to grab you by the fear centers and swing you around.  "I'm being left defenseless against the criminals" is a powerful motivator.

And as the study by Schilke et al. shows, once we're in a state of fear, we're more likely to trust whoever it is that claims to have a solution.

Look, it's not like I have all the answers myself.  My difficulty with politics is that I find most of the problems they wrestle with so complicated and multi-faceted that I can't imagine how anyone could find a solution that works.  But succumbing to fear certainly doesn't make you more likely to make good decisions, either about what to do or about who should lead us.

As Dave Barry said, "When trouble arises and things look bad, there is always one individual who perceives a solution and is willing to take command.  Very often, that individual is crazy."
Posted by Gordon Bonnet at 2:43 AM