This is the tendency of people to accept minuscule amounts of evidence if it seems to support what they already believed.  It's a natural enough human failing, I suppose; as Kathryn Schulz points out, it's only possible for us to consider being wrong in the abstract.  When we try to think, in the here and now, of what we might currently be wrong about, it's impossible to come up with a single thing -- even if we know it's highly unlikely that we're right about everything we believe.

But still.  Confirmation bias is such an amazing fuel for woo-woo belief, it's hard not to hate it.  And I saw two examples of headdesk-quality confirmation bias just in the last two days, claims that would be immediately ridiculous to anyone who didn't already have their heads in the clouds.

I use the clouds analogy deliberately, because the first claim has to do with there being a giant floating city in China.  This particular far-fetched tale is popular amongst the crowd who thinks that what we experience is constantly being manipulated by HAARP and "Project BlueBeam" and other such mind-altering ray guns from space.  Here's the photograph that gave rise to the claim: 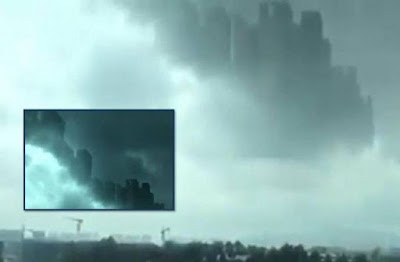 Now, I have to admit that it's pretty creepy looking, and that if I saw something like this, I'd be mighty freaked out.  But listen to how the source I linked above explains it:


Project Blue Beam... claims that NASA will soon attempt to inaugurate the Illuminati-sponsored Satanic New World Order (NWO) agenda under the authority of the Antichrist by using holographic image projection technology to simulate the second coming of Christ, or a space alien invasion of Earth.

There's also a bit in there about this signaling the "return of the biblical Fallen Angels."

The problem is, even if this isn't a digitally-altered photograph, there's a perfectly reasonable natural explanation -- that this is an example of atmospheric refraction, where strong temperature gradients in the atmosphere causes the air to bend light rather like a lens.  On rare occasions, this leads to the illusion that a distant object is hovering above the horizon.

But of course, understanding that requires that you know some physics.  Much easier to babble about the Illuminati and Fallen Angels.

The second claim has to do with the revelation that someone found a bible page "fused to a piece of steel beam" after 9/11.  Much is being made of the fact that the page is the "turn the other cheek" passage from the Gospel of Matthew, and that this is god sending us a personal message.

Notwithstanding the religious conundrum of why an all-powerful god would choose to make a page from the bible survive rather than all of the innocent people on the hijacked airliner, we also have the minor problem that (1) the earliest iteration of the story dates from 2011, not 2002 as mentioned in the claim, and (2) paper, being flammable, would not "fuse to steel."  It would simply burn to ash.

This didn't stop The This Isn't Really History Channel from doing a documentary about it in 2013 (and also claiming that the discovery was made in 2002 and for some reason kept secret for nine years), and from the religious passing the story around on social media as if it were some kind of miracle, rather than being evidence that god has an odd set of priorities.

You see what you want to see.  Whether it's god sending message in 9/11 debris, or floating cities heralding the beginning of the Satanic New World Order.

The whole thing is kind of maddening.  I know we all do it, to some extent; there may well be unconsidered parts of my own belief system that I am taking for granted because of the same kind of confirmation bias that plagues everyone.  I get that.  But it sure would be nice if we spent more time doing analysis of what we're claiming -- and applying a little bit of rationality to what we believe to be true.
Posted by Gordon Bonnet at 2:21 AM