Happy Halloween!  The day that little children are rewarded for wandering around in the dark wearing plastic masks with improperly lined-up eyeholes by being given enough sugar to induce diabetes in the entire population of China!

Which, of course, makes me sound like a grumpy curmudgeon.  To be honest, it's the crass commercialism that bugs me, not the holiday itself.  I actually rather enjoy a good costume, and have been known to don one myself, on occasion. 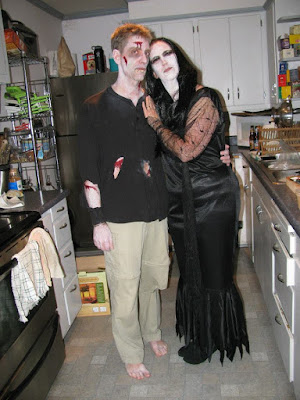 So I don't have anything against Halloween.  I just wish the stores would hold off on pushing candy and plastic pumpkins and the like until a little closer to the day itself.  (And the same goes for Christmas decorations, which I've already seen in our local grocery store.)

But of course, there are people who have strong feelings about Halloween.  That it's not just an innocent fun time of putting on Elsa costumes and wandering around saying "trick or treat."  That it amounts to...

... giving your child directly to Satan.

At least, that's the contention of Linda Harvey of Mission America.  Harvey warns us that that any kind of participation in Halloween is tantamount to dropping your kids straight into the maw of hell:


It's Halloween time again, and parents need to use caution and discernment about their family's participation in Halloween events.  Here's why: it's all about the spiritual safety of our children...  Halloween celebrates the spirits of darkness like no other event.  Demons are real.  So is Satan.  And these forces are more active than ever in recent times in America because we are inviting their activity in our lives.  So here’s my question about Halloween: Why hand your children to dark spiritual powers on a silver platter?  Oh, sure, maybe your smaller children only collect candy at a few houses, but down the road, what will Halloween be in their lives?  It's sure to develop into trick-or-treating with their friends, minus parents, and then... parties.  And what goes on at a Halloween party?  I've been talking for years about the dangers for years, and I have not changed my mind; the dangers are more prevalent all the time.


No, not parties!  Anything but that!  What is the world coming to?  We start with little kids in Captain America suits, and before you know it, we have teenagers holding demonic parties with satanic blood sacrifice rituals.

Then we had the ever-amusing Rick Wiles, claiming that even donning a costume makes you a Satan-worshiper:


You really see this present in South America, where the Catholic Church recognizes very paganistic holidays and practices.  I've traveled to some Third World nations and developing nations, and I've seen some pretty bizarre things, the locals marching down the street in their costumes, devil masks and Satan and skeletons and so forth, and you stand there and you think, "What a bunch of uncivilized pagan barbarians!"  But you realize they're lost, they're spiritually lost, they don't know the truth, they don't know god, they don't know Jesus Christ.  But then you come to America on Halloween, and you go, "What a bunch of uncivilized pagan barbarians!"  It's the same group of people!  They're worshiping their god.  And that's what we have to tell people.  They're worshiping their god, their father.  Lucifer.  That's the reason they're drawn to this day.  It's because he is their father.

Thus weaving together fear about demons with cultural insensitivity, prejudice, and white privilege to make a picture that is far uglier than some guy wearing a devil suit.

And the whole thing wouldn't be complete without Pat Robertson weighing in:


It used to be called All Saints' Eve.  Now we know it as Halloween...  That’s the day when millions of children and adults will be dressing up as devils, witches, and goblins … to celebrate Satan. They don’t realize what they’re doing.

So anyhow, that's this year's message from the Church of Our Lady of Perpetual Paranoia.  Myself, I'm not going to wear a costume this year, but it's not out of any fear that I'm offering myself up to the Dark Lord.  It's more that living out in the middle of nowhere, we never get any trick-or-treaters, so the only ones I'd be in a position to scare are my wife and dogs.  My wife already thinks I'm odd enough, and my dogs would probably just give me the Canine Head-Tilt of Puzzlement and then take a nap.

Instead, I'm thinking of going with a friend of mine to investigate a claim that our high school auditorium is haunted, something I've heard more than once from people who've been there at night.  I downloaded a ghost-hunting app on my iPad, so I should be all set.  Plus, our local fortuneteller consulted her mystical future-reading device (a "Magic 8 Ball").  She asked if we were likely to detect a ghost if we went to the auditorium on Halloween night, and was told "My Sources Say Yes."  So I think we've got a sure bet, here.
Posted by Gordon Bonnet at 3:15 AM