Today I was perusing the online news and happened to note a link to LiveScience called "The Ten Top Unexplained Phenomena."  Contrary to its name, LiveScience seems to specialize in catchy little blurbs on stuff that hardly qualify as actual science, but do attract the attention because they're either about stuff that most everyone is interested in even if they won't admit it (e.g. sex) or stuff that many of us are curious about even though some of us think it's nonsense (e.g. the supernatural).  This particular "top ten list" was predictably ordinary, and listed several things as "unexplained" that I have a fairly good explanation for, such as psychic phenomena (explanation: people are gullible), UFOs (explanation: people are gullible), Bigfoot (explanation: people are gullible), and mysterious disappearances, such as that of Jimmy Hoffa (explanation: don't fuck with the Mafia).  But the last unexplained phenomenon on LiveScience's list was one I'd never heard of, so of course that caught my attention.

It's called the "Taos Hum."  The Taos Hum is, as you presumably have already figured out, a pervasive humming noise heard near Taos, New Mexico.  (Check out the Taos Hum Page if you're interested in more information, or in signing up for the Taos Hum email listserv. Of course there's a listserv.)  The Hum was featured on the television show Unsolved Mysteries a while back, wherein they tried to capture the hum on recording equipment and failed, so they instead created an audio clip that was what the hum allegedly sounds like, to people who can hear it. 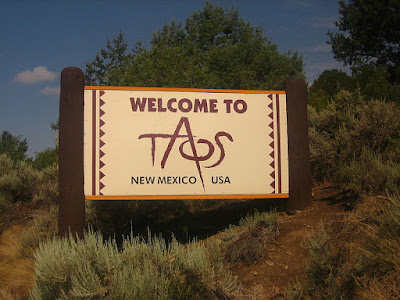 However, as anyone knows who's ever seen Unsolved Mysteries or other shows like it, they completely downplayed that the audio clip wasn't actually a recording of the real hum, but a simulation of a sound that may or may not exist in the first place.  It didn't stop them from acting all amazed and freaked out when they were listening to it, which made me want to scream, "You people just made this idiotic recording, and you're acting like it's real!  Are you crazy, or just stupid?"  But I didn't, because yelling at a video clip would make my family members ask the same question about me.

All of this, of course, is not to say that the Hum may not exist.  There are peculiar sounds in the world, many of them without a current explanation, and not all of which have proven impossible to detect.  An unexplained hum in Auckland, New Zealand, for example, was actually captured in a recording.  It is an acoustic signal that peaks at 56 hertz, near the bottom of the range of audibility for most people, and has yet to be explained.  But this makes it all the more odd that the Taos Hum hasn't been detected on sound equipment, much less recorded -- the Unsolved Mysteries people made it sound like making recording devices detect in that range is extremely difficult, when in fact it isn't hard at all.  A typical cassette recorder isn't very sensitive in that range, no; but with professional recording equipment, it shouldn't be a problem.

Another problem is how few people actually report hearing it.  Even a website that clearly considers the Hum to be real, and suggests as an explanation something that would be worthy of an episode of The X Files -- they imply that the Hum is either of supernatural origin, or caused by some secret government technology -- admits that only 2% of Taos residents can hear it.  Most people who've allegedly heard the phenomenon, when asked to listen to recordings of various low frequency sounds and identify which is closest, perk up when they hear recordings in the 50-80 hertz range, which is definitely in the audible range for most people with unimpaired hearing.  This raises the question of why, if it's as powerful as hearers say it is (some even say they can't sleep when the Hum is going on), everyone in Taos who isn't deaf hasn't reported the phenomenon.

Still, 2% is enough people that it deserves an explanation.  I tend to lean toward the idea that it's some form of tinnitus, combined with a dose of confirmation bias -- in this case, accepting an appealing lack of an explanation, and interpreting further anecdotal reports as evidence of its being some kind of grand mystery.  Once you think that the low-pitched ringing in your ears is a real phenomenon that is audible by others, you (1) pay more attention to it, and (2) become more and more convinced that it's true every time it subsequently happens.

I also must add, however, that I've been to Taos, and not only did I not hear any humming noise, I was immediately struck by the fact that there seemed to be an inordinately large number of Purveyors of Woo-Wooness -- Tarot card readers, palm readers, sellers of crystals, and metaphysical book stores.  Even at the time, before I'd ever heard of the Hum, it seemed to me a population of people who were primed to interpret everything with a mystical twist.

Of course, I could be wrong.  It's been known to happen.  After all, the Auckland Hum was shown to be a real phenomenon, and researchers haven't been able to find anything that explains it.  There are lots of unexplained noises in the world -- the most famous being the Bloop, which has actually been recorded by subs.  Of course, with the Bloop, there's a perfectly rational explanation; it's the noise made by Cthulhu snoring.  You think I'm joking.  Apparently the most common projected origin for the Bloops recorded by subs is right near the spot where H. P. Lovecraft said, in The Call of Cthulhu, stands the majestic sunken city of R'lyeh, where the octopoid god lies snoozing peacefully.  This fact should put the quietus on storming in there with subs and recording equipment.  It's not that I'm for impeding the progress of science, mind you; it's just that we ought to be careful.  Cthulhu, as far as I've heard, is not a morning person, and resents being awakened suddenly.  He also tends to wake up hungry, and with a serious case of morning breath.

On the other hand, honestly demands that I mention that in the case of the Bloop, there's a more likely explanation than the snoring of aquatic Elder Gods.  Just last year, some scientists over at NOAA found pretty good evidence that the Bloop is the sound of Antarctic ice sheets breaking up, distorted by being transmitted for long distances underwater.  Which is kind of a relief.  As interesting as the Lovecraftian pantheon is, I'd prefer that they weren't real, given the frequency with which his main characters had run-ins with Yog-Sothoth and Nyarlathotep et al. and ended up missing valuable limbs.


Assuming the Taos Hum actually is a real, external phenomenon, and isn't just a case of collective tinnitus or a resonance generated by a critical mass of woo-woos, it definitely deserves some more careful exploration.  I'd volunteer, but it's getting kind of late in the year, and Taos is one place in the United States that is even colder and snowier in the winter than upstate New York.  So I think any investigative team I lead will have to wait until spring.  Call me a wuss, but freezing my ass off listening for a sound that only 2% of people can hear anyway doesn't sound that inviting.  So I'm not planning on a trip to Taos any time soon, and if you're a Taos resident, you'll just have to deal with it for the time being.  I'll do what I can on my next visit, but until then, you'll just have to hum along or else ignore it.
Posted by Gordon Bonnet at 2:24 AM