I understand that there's a lot about our health care system that is downright awful.

There's price-gouging for medications.  There's the molasses-in-January-slow process for getting approval for drugs that desperately unhealthy people need now.  There's the terrible inequity between health care availability and quality for the rich and the poor.

But for all of that, there is a reason that regulations and bureaucracy exist.  No, it doesn't work all of the time.  It could certainly do with an overhaul.  But when people circumvent the rules that are set up to protect them from the effects of their own stupidity and gullibility, bad stuff happens.

Take, for example the five New York State residents who traveled to Germany to receive something called "live cell therapy" -- a dubious "alternative medicine" treatment wherein people are given live cell infusions from non-human animals (e.g. sheep) in order to...

... well, I dunno.  Given that it doesn't work, it's hard to tell what exactly they were trying to accomplish.  Proponents of "live cell therapy" tout its benefits, claiming that it treats everything from cancer to autoimmune diseases to aging symptoms.  Of course, the downside is obvious to anyone who received a passing grade in high school introductory biology; given that the cells you are receiving are not human, your immune system will certainly recognize them as foreign and set up a reaction against them.  The result at best would be redness and swelling, and at worst allergy and anaphylaxis.

Or, as the five New Yorkers found out, a zoonotic disease.  Zoonotic diseases are pathogens carried by other species but transmissible to humans -- rabies being a particularly well-known example.  There are lots of others, however, including various parasitic worms, cat scratch fever, giardia, toxoplasmosis, leptospirosis, and the bubonic plague.

And, apparently, Q fever.  Q fever is a contagious disease caused by the bacterium Coxiella burnetii, and causes flu-like symptoms.  Possible complications are liver enlargement, endocarditis, and pneumonia.  Apparently the injections of live sheep cells that were given to the New Yorkers in Germany were contaminated with the bacteria, and all five of them became ill. 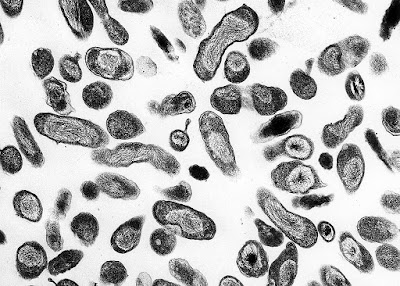 All seem to be recovering, but like Lyme disease, it can leave behind a latent infection that can cause problems months are years later.  It is definitely a disease I wouldn't want to trifle with.

Okay, I know that the FDA is often depicted as a bunch of stodgy traditionalists, unwilling to gamble anything or anybody on new therapies that might carry risks.  I also agree with the fact that if I were dying of an incurable disease, I would certainly want to take my chances with a promising but untested drug, given that my only other option was an early death.  But there are a lot of therapies that are unapproved for a reason -- because they are worthless.

And "live cell therapy" is one of those treatments that is downright dangerous.

All of this brings back to mind Tim Minchin's trenchant line, from his performance piece Storm (which, if you haven't seen it, you must watch immediately): "There's a name for alternative medicine that works.  It's called... medicine."
Posted by Gordon Bonnet at 4:32 AM