ORMUS to the rescue

Ever heard of ORMUS?

I hadn't, until a loyal reader of Skeptophilia sent me a link.  And when I got it, my first thought was that ORMUS sounds like the villain from a cut-rate 1960s science fiction movie.

But no.  ORMUS stands for "orbitally rearranged monoatomic elements," even though that spells ORME and not ORMUS.  The whole thing was supposedly discovered in 1975 by healer and erstwhile Arizona cotton farmer David Hudson, who claimed that he was drying out some minerals in the sunlight, but they exploded and disappeared completely, thus leading him to the discovery of "an exotic state of matter, where the metals do not form any bonds or crystals but exist as separate single atoms" and disproving the First Law of Thermodynamics simultaneously.  Even though ingesting stuff that explodes violently is generally speaking a bad idea, Hudson said that said exotic matter was good for damn near anything.  According to RationalWiki, here's a "non-exhaustive list" of things that ORMUS can allegedly do:

Notwithstanding that several of them seem mutually exclusive -- such as "correct errors in the DNA" and "emit gamma radiation" -- Hudson and his followers have insisted that the stuff is real.  This is despite the fact that Hudson himself gives every evidence of having failed 8th grade physical science; for example, he repeatedly says that there are 1018 ergs in one gauss, which is odd because an "erg" is a unit of energy and a "gauss" a unit of magnetic flux density, which are not even close to the same thing.  So this statement is a little like trying to figure out how many minutes there are in a kilogram.

After reading the RationalWiki  article I thought, "Okay, this claim is so obviously wrong that no one could possibly fall for it."  So I did a search for "ORMUS products."

And turns out, I was the one who was wrong.  About people falling for it, at least.  I got 425,000 hits, which made me want to weep softly while banging my forehead on my desk.

First, no idiotic alternative medicine claim would be complete without an equally idiotic article in Natural News supporting it.  And this one is a doozy -- it claims that ORMUS is the "Philosopher's Stone," thus vindicating not only David Hudson but the medieval alchemists.  But here are a few of the products I found featuring ORMUS:
And on and on and on.  Each one is laden with testimonials, meaning that there are people who are actually falling for this nonsense, and spending their good, hard-earned money on it.

Of course, "This product is not intended to treat, diagnose, or cure any human disease."  Because that's not what telling people that ORMUS "could be the answer" to "tumors... and some yet unnamed disease" amounts to.

Yes, I know the caveat emptor principle.  But preying on people who evidently didn't do well in public school science classes just isn't nice.  And when you add the fact that some of the people being ripped off are probably desperately ill, it really pisses me off.

It makes me wish that there was a new arm of the FDA called the "Prove It Department."  When people make claims like this, a couple of guys would show up at their door and say, "Okay, you say that your product contains unique quantum energy frequency wavelengths.  Prove it." And if they can't, they have their business license taken away. 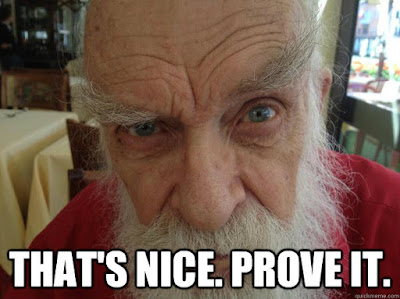 But that's a forlorn hope, I'm afraid.  There's a sucker born every minute, and that means that we'll never see the hucksters like these run out of business.
Posted by Gordon Bonnet at 2:43 AM