In the movie Memento, the main character, a fellow named Leonard Shelby, has anterograde amnesia, a brain disorder that prevents the formation of new short-term memories.  He forms his knowledge of the world from labeled Polaroid snapshots of people, and (for really important things) information that he has tattooed on his own skin.  The problem is, because he has no ability to reference memories of those people and events, he doesn't know if what he has written on the photographs and on himself is true -- if he was wrong, or being lied to, when he wrote the information down.

It's a fantastic, but highly unsettling, film.  Our worlds are made of a skein of remembered events, and without that network of referents, we are completely adrift.

The problem is that even for those of us who do not suffer from anterograde amnesia, what we remember is far less reliable than we think it is.  Consider that even those of us who admit "I have a terrible memory" are still quite convinced that what they do remember of the past is accurate.

And they should not be.  None of us should be. 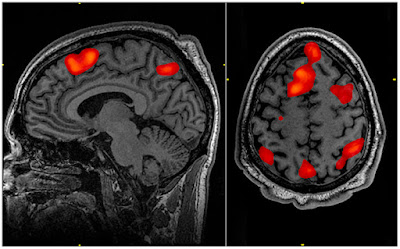 The whole topic comes up because of a ridiculous claim sent to me by a long-time loyal reader of Skeptophilia.  In it, a rather hysterical sounding guy tells us that the scientists at CERN have gone back in time and altered the past so as to change the title of Interview with a Vampire to Interview with the Vampire.   As evidence, he shows us that the top search words beginning with "interview with" are "interview with a vampire."  Q.e.d., apparently.

As for why CERN physicists would bother to do such a thing, the narrator says, "Maybe it's just a test.  I dunno."  But whatever the reason, his two-minute video sure struck a chord with some people. Amongst the comments we find:


Its [sic] interview with a vampire!!!!!  i remember it distinctly and clearly..... when i checked google after watching your video i got goose bumps, felt strange..... if you search for cached files on google its listed as 'A' vampire on an old Amazon link, and there are some old videos posted with the title 'Interview with a vampire 2'..... in the words of Tom Baker "somethings [sic] going on contrary to the laws of time!, i must find out what!!"


this is totally fucked up whats [sic] going on I am really scared...  what really really scares me is how some of us remember it the other way cause that means some of use [sic] are being manipulated and they changed our thinking some how and we don't know... but the caches support our old claims cause if it was always the new alternate reality the old searches for the proper names would not be cached in the search engines...

The possibility of simply misremembering is apparently much more far-fetched to these people.

And the problem is that all of us misremember.  A lot.  Lawrence Patihis, a psychological researcher at the University of California-Irvine, found that even people with "Highly Superior Autobiographical Memory" -- the rare individuals who can tell you what they wore, did, and ate for breakfast on October 23, 2004 -- still get it wrong some of the time.   For their ordinary memories (at least the ones that can be cross-checked against hard evidence), they have a three-percent failure rate; but when they are presented with information that deliberately screws around with their recollections, they end up with false/implanted memories 20% of the time.  Here's how science writer Erika Hayasaki describes the experiment:


Twenty people with such memory were shown slideshows featuring a man stealing a wallet from a woman while pretending to help her, and then a man breaking into a car with a credit card and stealing $1 bills and necklaces.  Later, they read two narratives about those slideshows containing misinformation.  When later asked about the events, the superior memory subjects indicated the erroneous facts as truth at about the same rate as people with normal memory.

In another test, subjects were told there was news footage of the plane crash of United 93 in Pennsylvania on September 11, 2001, even though no actual footage exists.  When asked whether they remembered having seen the footage before, 20 percent of subjects with Highly Superior Autobiographical Memory indicated they had, compared to 29 percent of people with regular memory.

“Even though this study is about people with superior memory, this study should really make people stop and think about their own memory,” Patihis said.  “Gone are the days when people thought that [only] maybe 20, 30 or 40 percent of people are vulnerable to memory distortions.”

The bottom line is that even the best of us have unreliable memories, which puts the rest of us slobs straight into "You're probably remembering almost everything incompletely and incorrectly" territory.  It's a frightening conclusion; what we remember seems so solid, so incontrovertible, that it's hard to imagine that what is in our memory centers is an amalgam of actual fact, stuff we were told by others, and stuff that we spun straight from whole cloth.  And without anything to compare it to, we're not much better off than Leonard Shelby with his photographs and tattoos.

So there's no need to accuse the scientists at CERN of going back in time to change one word in a book title.  First off, they have many better things to do, such as creating black holes to destroy the Earth and developing targeted weather death rays to send hurricanes to places that strangely enough always get hurricanes anyway.  It's not that we don't know that people forget things or get things wrong... it's just that we get uncomfortable when we realize that our memories are far worse than we like to admit.
Posted by Gordon Bonnet at 4:28 AM