Can we get something straight, here?

The statement, "Some radical ideas have proven true" is not equivalent to "if an idea is radical, it must be true."  There are many, many ideas out there that are simply batshit crazy, and the experts think they're wrong for a reason.

And you do not improve your case by bringing up the fact that "they disbelieved Einstein at first, too."

This comes up because of a loony idea that appeared over at the site Ancient Code that claims that the Egyptian Sphinx is 800,000 years old.  And no, I didn't slip and put in too many zeroes.  There are apparently a couple of geochemists over at the National Academy of Sciences in Ukraine who analyzed erosion and wear patterns in the rock from which the Sphinx is built, and concluded that the only possible explanation is that the Sphinx is 200 times older than archeologists are telling us.

This just brings up two questions:

So at first I thought this was some kind of hoax.  But no, the two scientists, I. Vyacheslav Manichev and Alexander G. Parkhomenko, are apparently serious. "The absolute mark of the upper large erosion hollow of the Sphinx corresponds to the level of water surface which took place in the Early Pleistocene," Manichev and Parkhomeno write.  "The Great Egyptian Sphinx had already stood on the Giza Plateau by that geological (historical) time."

The article, which quotes extensively from their paper, describes their argument, which seems to be based on an assumption that the weathering of the rock from which the Sphinx is built couldn't have happened in 4,500-odd years.  Plus, as the Sphinx is thought to have spent at least part of that time covered in sand and thus protected from damage, there's no way all of the erosion we see can be due to processes that have occurred in that time.  We then hear about the geological history of the area around Giza, including the presence of a freshwater lake 800,000 years ago that could account for the condition of the Sphinx.

No mention is made of the fact that the builders of the Sphinx could have constructed it from rock that was already partially weathered. 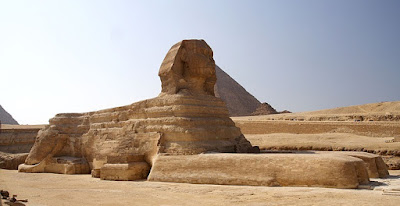 But it's only at the very end of the article that they admit the worst problem with all of this:

Some might say that the theory proposed by Manichev and Parkhomenko is very extreme because it places the Great Sphinx in an era where there were no humans, according to currently accepted evolutionary patterns.  Furthermore, as it has been demonstrated, the two megalithic temples, located adjacent to the Great Sphinx were built by the same stone which means that the new dating of the Sphinx drags these monuments with the Sphinx back 800,000 years.  In other words, this means that ancient civilizations inhabited our planet much longer than mainstream scientists are willing to accept.

So, if some model of geological weathering requires that an archeological artifact be 200 times older than anyone thought, it must be all of the other archeological, historical, and biological evidence that is wrong, not something amiss with the model itself?

You'd think this would be a case where most everyone would read this and say, "Yeah, right," and walk away, snickering softly.  But as we've seen before, people love an iconoclast.  All you have to do is claim that you've shown that the fancy-pants ivory-tower scientific experts are wrong about something, and you'll have wingnuts of all descriptions swarming to your defense.  This claim showed up on Reddit, over at the r/conspiracy subreddit, a few days ago, and here are a few of the responses posted:


As someone who has always been into history and science (and the popularly accepted ideas in those fields), lately I've been really interested in alternate, extended human timelines and alternatives to Darwin's theory of evolution (which as described in The Origin of Species, is actually much rougher and less accurate than mainstream education would have you think, don't get me wrong we can watch viruses and even plants and animals adapt and "evolve" on a small scale, but Darwin's theory goes a lot further than that).

Look into the Thunder Bolt Project, pretty interesting.  A lot of shared culture, mythology, cave paintings can be traced back to electrical events witnessed in the sky, by cultures that never spoke to one another.

Get into any meaningful science discussion about the true nature of reality, and fairly soon the discussion will go toward "14th dimensional hyper-strings" and "wave/particle duality" or "multiverses".  Point being, is that eventually it all becomes philosophy / metaphysics.  And all of it is beyond our level of comprehension.  This is whats [sic] so frustrating in speaking to the "Bill Nye" science types.  You know the ones, with a simple childlike answer for everything.  They are truly no more inquisitive nor intelligent than the average bible thumper.  Instead of quoting John 3:16, they simply reflexively quote their overly simplistic 5th grade science book.  What's so sad is they go through their life actually believing that they have some sort of lock on the objective nature or reality.

If all possibilities exist, then what we see as our past and the course of evolution up until this point is precisely the way things had to happen in order that we be here right now, no matter how improbable. That, I believe, is the explanation for the seemingly magical leaps in evolution and indeed the genesis of life in this universe itself.  It happened that way in order for us to be here now, and why we are here now is not a question that we can answer.

Science and scientists want to have all of the answers, they want to have everyone just bow down and believe, they're worse than the religions, look at how they treated Einstein, first he was crazy, now everyone thinks that relativity is gospel.

The last one is the one that made me facepalm the hardest.  Not only is the author an odds-on favorite for a gold medal in the Olympic Comma Splice Event, (s)he apparently doesn't realize that Einstein has one other thing on his side besides blind devotion: evidence.

Relativity has been tested every which way from Sunday -- pressed harder, honestly, than a lot of other scientific models, because its conclusions are so counterintuitive.  And every time, the evidence has supported Einstein.

And where is the support for there having been modern, monument-building humans in the Nile Valley 800,000 years ago?

Thought so.  You can't just make a claim, and then state that your explanation is the only possibility, so fiat lux and q.e.d. and so on.  It has to explain all of the relevant data, or there's something wrong with your model.

Just being a radical swim-against-the-current type isn't enough.  "Many great thinkers were criticized at first" is not logically equivalent to, "I'm being criticized, therefore I must be a great thinker."

And if any further evidence is uncovered that the Sphinx is 800,000 years old, I'll eat it for breakfast.
Posted by Gordon Bonnet at 2:36 AM