Most people really don't understand the concept of risk.

Let me give you an example.  Let's say that there is a woman who has been identified as being at risk of having a stroke.  She goes to a doctor, who offers her one of three medications to reduce her risk of stroke over the next five years.


Medication A would increase her likelihood of remaining stroke-free from 91% to 94%.

Medication B reduces her risk of a stroke by 1/3.

Medication C reduces her risk of a stroke by 3%.

Which one should she take?

Most folks seeing this problem pick B, largely because it sounds better -- a reduction by 1/3 is a lot, right?  3% is a pretty paltry change, and 91% and 94% chances of remaining healthy are pretty close.

It comes as a big surprise to find out that all three of them are the same.

It's also an overall 1/3 reduction in her risk.

Such mathematical monkey-business is why there's been such confusion over the WHO's recent declaration that red meat causes cancer (and processed meat, such as hot dogs and pepperoni, are even worse).   In fact, processed meat is now in "Group 1" -- "substances that cause cancer" -- along with tobacco, human papilloma virus, and asbestos. 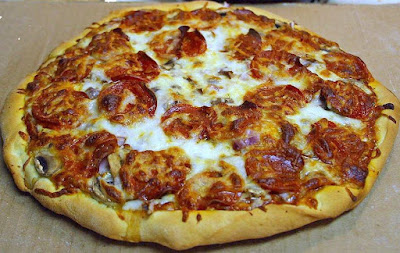 [image courtesy of photographer Jon Sullivan and the Wikimedia Commons]

It's even accompanied by statistics that seem, frankly, pretty terrifying:

Holy crap, right?  1.7 ounces a day (not much) translates to an 18% increase (a lot) in your chance of colorectal cancer (a disease that is high on most people's "Least Favorite Things to Think About" list).

Add that to another study that found that "2% of hot dogs contain human DNA," and it looks like we might see a lot of people finding other things for their summer barbecues.

The problem is that all of this stuff is misleading.  First, what does an 18% increase look like?  According to the National Cancer Institute's Surveillance, Epidemiology and End Results Fact Sheet on colorectal cancer, current rates of diagnosis estimate the number of new cases at 42.4 per 100,000 each year.  An 18% increase brings that number up to a little over 50.

In other words, if 100,000 people ate 1.7 ounces of salami a day for a year, you'd expect there to be eight more cases of colorectal cancer in that group as compared to a comparable non-salami group of 100,000.

Here's another problem with the WHO information.  "Group 1" substances are said to be "known to cause cancer."  But all that means is "known to increase your risk."  It doesn't say by how much, nor what the risk was to begin with.  For example, cycling to work and swimming naked in a crocodile-infested river are both outdoor activities that are "known to increase your risk of dying in an accident."  So on the "Outdoor Activities Risk" list, these would both be classified as "Group 1."

Which one would you prefer doing?

At the risk of beating the point unto death, Casey Dunlop of Cancer Research UK cited statistics illustrating how silly it is to put tobacco and bacon in the same category.  Tobacco is a product that is toxic in any amount, confers no benefits whatsoever upon the people consuming it, and is directly responsible for 86% of lung cancers and 19% of all cancers combined.  Even assuming the worst-case scenario, daily consumption of processed meat is responsible for 21% of colorectal cancers and 3% of all cancers combined.

Puts things in perspective, doesn't it?

Oh, and about the human DNA in hot dogs thing; this doesn't mean that the hot dog manufacturers are incorporating Soylent Green into their meat.  Given the sensitivity of DNA tests, this probably means the presence of a few cells from a bit of dry skin or something.  And if you think that it's only hot dogs that have this kind of contamination, I have news for you.  The amount of extraneous cellular material (to put it euphemistically) that we consume by accident on a daily basis has not been tested, but is undoubtedly high.  If you are a pet owner, and don't think you consume dog and/or cat DNA every single day, well... either you clean your house far more frequently and thoroughly than I do, or you're living in a fool's paradise.

And amazingly enough, most of us are pretty healthy.  Funny thing, that.

Now, I'm not saying we should eat hot dogs and bacon and pepperoni with wild abandon.  Reducing your consumption of red and processed meat is definitely a good thing.  But everything has dangers; there are risks associated with every food out there.  The trick is to figure out which calculated risks are worth taking, and what the tradeoff is.

After all, as Chuck Palahniuk put it in Fight Club, "On a long enough timeline, the survival rate for everyone drops to zero."
Posted by Gordon Bonnet at 2:24 AM