One of the reasons I get so impatient with woo-woos is that science is plenty cool enough without making shit up.

There were two examples of this from the field of quantum physics this week.  Because quantum physics is already weird even without any embellishment or misinterpretation, it's been particularly prone to being co-opted by woo-woos in their search for explanations supporting (choose one or more of the following):

But you don't need to do any of this to make quantum physics cool.  Let's start with an experiment regarding "quantum entanglement" -- the linking of two particles in a state describable by a single wave function.  While this might seem uninteresting at first, what it implies is that altering the spin state of particle A would instantaneously change the spin state of its entangled partner, particle B -- regardless of how far apart the two were.  It's almost as if the two were engaging in faster-than-light communication.

There is a further twist on this, and that's where things get even more interesting.  Most physicists couple the entanglement phenomenon with the idea of "local realism" -- that the two particles' spin must have been pointing in some direction prior to measurement, even if we didn't know what it was.  Thus, the two entangled particles might have "agreed" (to use an admittedly anthropomorphic term) on what the spin direction would be prior to being separated, simulating communication where there was none, and preserving Einstein's idea that the theories of relativity prohibit faster-than-light communication.

Scientists at Delft University of Technology in the Netherlands have closed that loophole.  Using an extremely fast random number generator, they have altered the spin state of one of two entangled particles separated by 1.3 kilometers, and measured the effect on its partner.  The distance makes it impossible for sub-light-speed communication between the two.  This tosses out the idea of local realism; if the experiment's results hold -- and they certainly seem to be doing so -- the particles were indeed communicating faster than light, something that isn't supposed to be possible.  Einstein was so repelled by this idea that he called it "spooky action at a distance."

To quote the press release:

With the help of ICFO’s quantum random number generators, the Delft experiment gives a nearly perfect disproof of Einstein's world-view, in which "nothing travels faster than light" and “God does not play dice.”  At least one of these statements must be wrong. The laws that govern the Universe may indeed be a throw of the dice.

If this wasn't weird and cool enough, a second experiment performed right here at Cornell University supported one of the weirdest results of quantum theory -- that a system cannot change while you're watching it.

Graduate students Yogesh Patil and Srivatsan K. Chakram cooled about a billion atoms of rubidium to a fraction of a degree above absolute zero, and suspended them between lasers.  Under such conditions, the atoms formed an orderly crystal lattice.  But because of an effect called "quantum tunneling," even though the atoms were cold -- and thus nearly motionless -- they could shift positions in the lattice, leading to the result that any given atom could be anywhere in the lattice at any time.

Patel and Chakram found that you can stop this effect simply by observing the atoms.

This is the best experimental verification yet of what's been nicknamed the "Quantum Zeno effect," after the Greek philosopher who said that motion was impossible because anyone moving from Point A to Point B would have to cross half the distance, then half the remaining distance, then half again, and so on ad infinitum -- and thus would never arrive.  Motion, Zeno said, was therefore an illusion.

"This is the first observation of the Quantum Zeno effect by real space measurement of atomic motion," lab director Mukund Vengalattore said.  "Also, due to the high degree of control we've been able to demonstrate in our experiments, we can gradually 'tune' the manner in which we observe these atoms.  Using this tuning, we've also been able to demonstrate an effect called 'emergent classicality' in this quantum system."

Myself, I'm not reminded so much of Zeno as I am of another thing that doesn't move while you watch it. 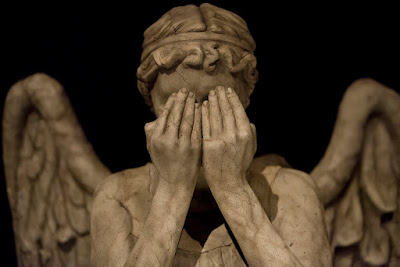 See what I mean?  You don't need to add all sorts of woo-woo nonsense to this stuff to make it fascinating.  It's cool enough on its own.

Of course, the problem is, understanding it takes some serious effort.  Physics is cool, but it's not easy.  All of which supports a contention I've had for years; that woo-wooism is, at its heart, based in laziness.

Me, I'd rather work a little harder and understand reality as it is.  Even if it leaves me afraid to blink.
Posted by Gordon Bonnet at 2:22 AM