Given that my interests are pretty well known to my friends and family, whenever anything interesting happens on the Bigfoot, ghosts, or aliens scene, I'm sure to be sent the relevant links more than once.

This time it's aliens, with the discovery of an anomalous light-dimming pattern in a star with the euphonious and easy-to-remember name of KIC 8462852.   You probably know that light-dimming is one of the main ways that astrophysicists locate exoplanets -- if a telescope on Earth detects a periodic dimming of the light from a star, it is likely to mean that a planet is in transit across it, temporarily blocking its light.  From the period and the extent of the dimming, inferences can be made about the size of the planet and its distance from its home sun.

But this time scientists have found something odd, because whatever is causing the dimming of KIC 8462852 is not acting in a regular or predictable fashion.  And whatever it is seems to be large.  Even a Jupiter-sized planet only blocks 1% of a star's light.  This star is undergoing an irregular diminution of its light... of up to 22%!

[graph of light intensity over time, after Boyajian et al.]

The most mysterious thing about the phenomenon is its lack of periodicity.  At the moment, scientists simply don't know what this means.  And idle speculation, without a good model for what's going on, is not usually fruitful in science, so the astronomers and astrophysicists are being circumspect.  Here's what astronomer Phil Plait had to say:


The authors of the paper went to some trouble to eliminate obvious causes.  It’s not something in the telescope or the processing; the dips are real.  It’s not due to starspots (like sunspots, but on another star).  My first thought was some sort of planetary collision, like the impact that created the Moon out of the Earth billions of years ago; that would create a lot of debris and dust clouds.  These chunks and clouds orbiting the star would then cause a series of transits that could reproduce what’s seen.

Plait admits the downside of this idea, which is that dust and debris should emit infrared light as it's warmed by the star it surrounds, and we're not seeing that.  Others have suggested clouds of comets...  or an alien megastructure.

Seriously.  Years ago Freeman Dyson proposed that a sufficiently advanced civilization could disassemble planets to build a huge sphere around its star, thus capturing (and utilizing) virtually all of the star's emitted energy.  (Dyson spheres show up all the time in science fiction, most famously in the Star Trek: The Next Generation episode "Relics," and in Larry Niven's book Ringworld.)  A partially-constructed Dyson sphere, or one that had been damaged, might be expected to have the irregular light-dimming profile we're seeing in KIC 8462852. 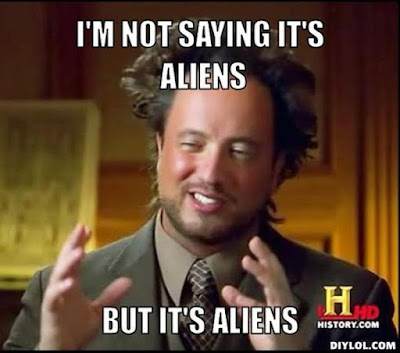 But even the people who work at SETI (Search for Extraterrestrial Intelligence) are being cautious.  There are other possible explanations that have to be ruled out before we can say with any kind of confidence that we're looking at something other than a purely natural phenomenon.  Recall that the discovery of pulsars back in 1967 by Jocelyn Bell Burnell was at first thought to be evidence of an alien signaling device -- in fact, the first pulsars to be detected were nicknamed LGMs (Little Green Men).  Fairly quickly, of course, it was found that there was a completely natural explanation for the observation.

As Jason Wright, astronomer at Pennsylvania State University, put it, "We have to keep in mind Cochran's Command to Planet Hunters: Thou shalt not embarrass thyself and thy colleagues by claiming false planets."

But SETI, quite rightly, is already requesting radio telescope time to study the phenomenon.  If this is evidence of an intelligent alien civilization, there should be a way to support this with additional evidence.  Until then, it's premature to state with confidence that this is anything other than an unexplained stellar anomaly.

It hardly needs to be added that I would be beside myself if it turns out we are looking at extraterrestrial intelligence.  Finding evidence that we are not alone has been one of my dearest desires since I was a child, probably explaining why I have various posters in my classroom featuring aliens, including Fox Mulder's famous UFO poster from The X Files with the legend, "I Want to Believe."  But I, like Plait and Wright and Tabetha Boyajian, the astronomer who discovered the anomaly, want to move forward cautiously here.  There is a long list of weird observations that have at first been touted as evidence of aliens and other fringe-y claims, and have not borne up under additional study.  The best I can say at the moment is that this one looks hopeful -- and certainly deserving of intense further investigation.