The tour guide in CrazyTown

I'm being driven to the conclusion that Ben Carson is insane.

This has very little to do with his stance on actual issues.  From what I've heard, when he sticks to talking about policy, there's not much to distinguish him from the other candidates for the Republican nomination.  But as soon as he veers off script, Carson very quickly ends up leading us on a guided tour of CrazyTown. 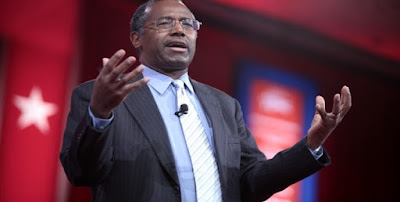 Let's start with his comment earlier this year that there's no such thing as a war crime. "There is no such thing as a politically correct war," Carson said, in an interview on Fox News.  "We need to grow up, we need to mature.  If you’re gonna have rules for war, you should just have a rule that says no war.  Other than that, we have to win."

You have to wonder if he thinks the Nuremberg Trials were justified.  After all, the Nazis didn't have to fight a politically correct war, right?  They were just trying to win.

Then we have his dire claims about Obamacare, which ring a little hollow after a Rand Corporation study done earlier this year that found that 17 million more Americans have health insurance since the passage of the Affordable Care Act.

But no reason to let a little thing like facts get in the way.  Obamacare is the "worst thing since slavery" (direct quote, there), Carson told us on one occasion.  On another, he said that the ACA "has been even more damaging to the United States than the terrorist attacks of 9/11."  When the aghast interviewer asked him to elaborate, Carson said, "Things that are isolated issues as opposed to things that fundamentally change the United States of America and shift power from the people to the government.  That is a huge shift.”

Then we have his comments that the events that occurred in Nazi Germany could happen right here in the United States -- which is actually sensible until you put it in juxtaposition with some of his other statements.  At a campaign event in New Hampshire, Carson said that some people believed that the rise of something like Nazism would never happen in the USA.

"I beg to differ," Carson said.  "If you go back and look at the history of the world, tyranny and despotism and how it starts, it has a lot to do with control of thought and control of speech...  If people don't speak up for what they believe, then other people will change things without them having a voice.  Hitler changed things there and nobody protested.  Nobody provided any opposition to him."

Hitler also swayed a lot of Germans by convincing them that they were at risk of losing their cultural identity from such threats as the Jews.  Kind of curious, then, that Carson is employing the same kinds of tactics, but aimed instead at gays -- whom he said were responsible for the fall of Rome:


I believe God loves homosexuals as much as he loves everyone, but if we can redefine marriage as between two men or two women or any other way based on social pressures as opposed to between a man and a woman, we will continue to redefine it in any way that we wish, which is a slippery slope with a disastrous ending, as witnessed in the dramatic fall of the Roman Empire.

Of course, he may not be all that sure of his own facts, because he said at another time that political correctness was what destroyed the Roman Empire:


You know, there is no society that can long survive without values and principles.  And if we get so caught up in political correctness, that nothing is right and nothing is wrong, then we go the same route as Ancient Rome.  They did exactly the same thing.  And they forgot who they were.  They stood for nothing and they fell for everything and they went right down the tubes.

So the fall of Rome couldn't have had anything to do with mismanagement by crazy leaders and their being attacked by a shitload of barbarians?

I can understand why Carson wouldn't want to draw attention to the former, at least.

The whole thing may be a moot point anyhow, because Carson went on record as saying that there "may be so much anarchy going on" in 2016 that the elections will be cancelled.

I'm willing to believe that a lot of the candidates, on both sides of the aisle, are pandering to their voter base, and saying whatever it takes to get elected.  When you look at campaign statements, and then what the victors actually do once they're in office, it becomes pretty clear that there's often a pretty big disconnect between the stump-speech rhetoric and the reality of policymaking.

Carson, though... when he speaks, in that soft, patient, utterly reasonable tone of his... I think he honestly believes everything he's saying.

Which makes his position as a frontrunner for the Republican nomination absolutely terrifying.  If this man gets the nod, and has even a prayer of a chance of winning the presidency...  well, let me just say that there are precedents in world history for insane but charismatic ideologues taking control of a country -- and none of them end well.