As a further indication of how completely unhinged our country is becoming, there is a resolution before the county commission in Blount County, Tennessee -- authored by Commissioner Karen Miller herself -- asking god's wrath to pass them by.

Here's the text of the resolution:


With a firm reliance upon the providence of Almighty God WE the BLOUNT COUNTY LEGISLATURE call upon all of the Officers of the State of Tennessee, the Governor, the Attorney General, and the members of the Tennessee Legislature, to join US, and utilize all authority within their power to protect Natural Marriage, from lawless court opinions, AND THE financial schemes of the enemies of righteousness wherever the source AND defend the Moral Standards of Tennessee.

WE adopt this Resolution before God that He pass us by in His Coming Wrath and not destroy our County as He did Sodom and Gomorrah and the neighboring cities.  As the Passover Lamb was a means of salvation to the ancient Children of Israel, so we stand upon the safety of the Lamb of God to save us.  WE adopt this Resolution begging His favor in light of the fact that we have been forced to comply and recognize that the State of Tennessee, like so many other God-fearing States, MAY have fallen prey to a lawless judiciary in legalizing what God and the Bible expressly forbids.

The number of features in this resolution that are eyebrow-raising is impressive, given that it's only two paragraphs long.  First, there's the whole separation of church and state thing, which Miller apparently thinks is an optional clause in the Constitution.

But consider also the "financial schemes of the enemies of righteousness."  I'm no biblical scholar, but my impression is that Capitalist Jesus is a fairly recent invention.  My memory is more that there were dozens of biblical prohibitions against usury (lending money at interest) -- it's called an "abomination" more than once, and in fact has a good many more mentions in the bible than homosexuality does.  Deuteronomy 23:19 is especially unequivocal: "You shall not charge interest on loans to your brother, interest on money, interest on food, interest on anything that is lent. "

Then there's Leviticus 19:34: "The foreigner residing among you must be treated as your native-born. Love them as yourself, for you were foreigners in Egypt.  I am the Lord your God."  Oh, and the thing Jesus said about the money-changers in the temple, the poor inheriting the Kingdom of Heaven, and how it's easier for a camel to pass through a needle's eye than for rich man to enter paradise.

Jesus sounds more like a socialist than a Republican, frankly. 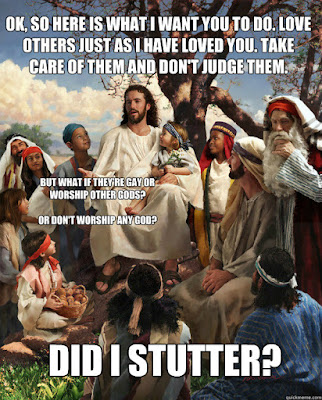 Then there's the attitude that the all-loving and all-seeing god would smite the shit out of the people in Blount County because of something the Supreme Court did in Washington D.C.  Is it just me, or does Commissioner Miller not have much faith in the aim of the almighty?  It's something that has struck me before -- the way natural disasters are blamed on god's wrath, when in fact hurricanes and floods and wildfires and earthquakes don't discriminate much between the righteous and the unrighteous.  They more have to do with whether the geographical area in question was already prone to hurricanes, floods, wildfires, or earthquakes.

It's almost as if god wasn't choosing where to send natural disasters, that they're being directed by climate and plate tectonics.  Funny thing, that.

Besides, what kind of deity would hold Commissioner Miller, who is presumably a god-fearing Christian herself, guilty having anything to do with same-sex marriage?  She isn't a Supreme Court justice, and presumably has neither voted for legalization of same-sex marriage nor is in such a marriage herself.  So why would she need to "beg for favor?"  And why would Blount County, which according to a demographic survey is nearly 50% evangelical protestant, be singled out to be treated like "Sodom and Gomorrah?"

Seems to me that a god that smites whole counties, pretty much at random, is kind of an asshole, and not really all that worthy of worship.

But that is the sort of deity that Ms. Miller apparently believes in.  It'll be interesting to see if the commission approves her resolution tomorrow.  You have to wonder if there'll be any commission members who will be willing to vote against it, and go on record as saying, "No, I'd prefer to pass on the providence of the Almighty God.  I'm standing with the Lawless Judiciary and the Enemies of Righteousness."

I know that's what I'd do.  In fact, I'd not only vote against the resolution, but I'd devise a resolution of my own suggesting that Ms. Miller is unfit for public office in a secular democracy.  After all, I've already established that I'm deserving of God's Coming Wrath, so I'm pretty much screwed anyway.  At this point, it's Go Big or Go Home.