Four days ago, I wrote about a new study that appears to show that trans-cranial magnetic stimulation of the posterior medial frontal cortex of the brain causes a decrease in belief in god.

As I mentioned in the post, the effect was small, the sample size was small, and the whole thing is a lot flimsier than the media seemed to treat it.  Headlines like "Scientists Use Brain Stimulation to Make You Stop Believing in God" vastly overplay the actual results of the research, turning a mildly interesting psychological study into hyped, sensationalized clickbait.

But there is never a misinterpretation of scientific research so skewed that you can't respond by misunderstanding the misinterpretation, and making it way worse.  Conservative talk radio host Joe Miller, in interviewing Cornell adjunct professor of statistics William Briggs, put forth the opinion that such a technique could be used to suck religion out of the devout.

The funny thing about the piece, which is about ten minutes long and is well worth giving a listen, is that Briggs starts out by making precisely the same objections to the study that I did -- that the number of test subjects was too small to show an overall effect, that self-reporting as a means of getting data on psychology is inherently flawed, and that trying to come up with a metric for a complex behavior like religious belief is somewhere between difficult and impossible.  But instead of coming to the conclusion that because of all of this, the study probably isn't worth worrying about, Briggs and Miller went the opposite way -- that this is just the first of many attempts by evil progressives to "use any aggressive tactics" to destroy faith.

Miller also brought up the inevitable role of the "transgender agenda" in pushing such abuses of technology.  This agenda, according to Miller, involves "no parameters on sexual acts of behavior," and requires the destruction of Christianity to achieve its ends.

Notwithstanding the fact that the transgender people I know seem more concerned with living their own lives free of ridicule, criticism, and threat than they do with telling anyone else what to believe, Miller paints progressives  in general and LGBT individuals in particular as wanting to achieve a no-holds-barred attitude toward sex any way they can, up to and including "zapping people's brains with magnets" in such a way as to destroy their belief in god.  And, Miller adds darkly, along the way leaving them "incapable of adding two plus two." 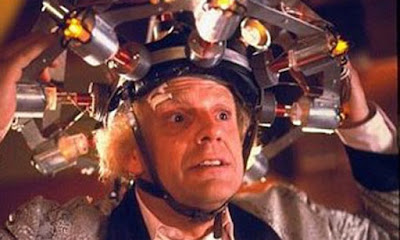 So we start with a study that most likely didn't demonstrate anything of interest, and we end up with evil transgender people attaching magnets to the skulls of the devout to suck Jesus out of their brains.

What I find most interesting about this fear talk is that it glosses over one little fact that Briggs actually let slip during the interview (and Miller jetted past without a mention) -- 3/4 of the people in the United States are still Christian.  Just about every public office in the land is held by a Christian.  Despite the fact that Article VI of the Constitution states, "no religious test shall ever be required as a qualification to any office or public trust under the United States," one of the quickest ways not to get elected in the United States is to admit to being an atheist -- or, worse, to hint that religion might wield too much power over politics.

So the idea that even if the trans-cranial magnetic stimulation did reduce religiosity (it probably didn't), and the effect was permanent (it wasn't), you'd still have to zap something like 240 million people to produce an effect.

That, my friends, is a shitload of magnet-wielding transgender people.

But of course, it's pretty obvious why people like Miller traffic in such fact-free paranoia.  Fear tends to make people close ranks, circle the wagons, and double down on what they believe.  The surest way to get voters to espouse a view is to make them afraid of what will happen if they don't.  "Vote conservative," Miller is saying, "unless you want transgender people sneaking into your home and zapping your brain with magnets."

How someone could believe something like this is a question worth asking; but as we've seen so many times before, when you engage the emotions -- especially fear -- the logic centers of the brain pretty much go offline.

Which means that Miller has also succeeded in brain zapping, without using even a single magnet.
Posted by Gordon Bonnet at 2:49 AM