All I want for Christmas is a Death Asteroid

So it's December, which means it's time for Peace on Earth, Good Will Toward Our Fellow Humans, and Death Asteroids.

I'm not sure what it is about this time of year that brings out the fatalism in so many.  You might recall that the Mayan Apocalypse, for example, was scheduled on December 21, 2012, prompting mass panic amongst the woo-woos until December 22 rolled around and it became apparent that contrary to popular expectation, the world had failed to end on schedule.

It's disappointing when you can't even count on an apocalypse to show up on time.

In any case, this year, the End of the World is going to be brought about by an asteroid with the euphonious name 2003 SD220, which is scheduled to make a near pass to Earth on Christmas Eve. 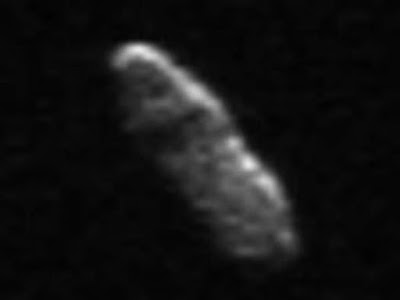 Well, near, that is, in the sense of "11 million kilometers away," which is 28 times the distance from the Earth to the Moon.  So we're talking "near" in the astronomical sense, just as geologists consider anything under about 50,000 years old "recent," even though 50,000 years seems like a long time even for someone as old as I am.  But such sensible and soothing words have not had the least effect on the woo-woos, who are jumping about making panicked little squeaking noises about how the asteroid is going to kill us all, notwithstanding the fact that all of the previous Ends of the World they predicted have not, technically, happened.

The asteroid is 2.5 kilometers across and is moving five miles per second, which is a pretty good clip for something that large.  But from there, irrational fear takes over and logic goes right out the window.  It will be close enough, we are told, that its gravitational pull will cause us to experience deadly tsunamis, earthquakes, and the eruption of dormant volcanoes.  And that's if it doesn't actually impact the Earth directly, which would be an "extinction-level event."

Never mind that there are plenty of mountains on the Earth that are 2.5 kilometers tall, and their gravitational pull doesn't cause tsunamis etc.  And they're a hell of a lot closer than 2003 SD220 will ever get.

But maybe it's because it's traveling so fast.  Maybe by some new and undiscovered type of physics, moving fast makes something's gravitational pull increase.  I dunno.

So NASA, who must be really fucking sick and tired of people who don't understand science getting everyone stirred up every couple of months, issued a statement.  Paul Chodas, manager of the Near-Earth Object Office of the Jet Propulsion Laboratory, said the following:


There is no scientific basis -- not one shred of evidence -- that an asteroid or any other celestial object will impact Earth on those dates.

In fact, NASA's Near-Earth Object Observations Program says there have been no asteroids or comets observed that would impact Earth anytime in the foreseeable future.  All known Potentially Hazardous Asteroids have less than a 0.01% chance of impacting Earth in the next 100 years.

The Near-Earth Object office at JPL is a key group involved with the international collaboration of astronomers and scientists who keep watch on the sky with their telescopes, looking for asteroids that could do harm to our planet and predicting their paths through space for the foreseeable future. If there were any observations on anything headed our way, we would know about it.

If there were any object large enough to do that type of destruction... we would have seen something of it by now.

Can't you just hear the annoyed sighing that went along with his writing this?

But of course, that statement had exactly the opposite effect from what Chodas wanted.  If NASA was saying the asteroid is harmless, that must mean they're covering something up.  It must be deadly.  It must, in fact...

... be four times the size of Jupiter.

And yes, there are people who are seriously claiming that.

Why haven't we seen it yet, if it's so big, is something of a mystery.  After all, we can see Jupiter itself just fine, and it's currently 57,000 times further away than the asteroid is.

Maybe the asteroid is made of dark matter.  Makes as much sense as anything else these people say.

As for me, I'm not worried.  2003 SD220 is going to be far enough away that it won't be visible without a pretty good telescope, which is actually kind of disappointing.  So on Christmas Eve, I'll be nestled up all snug in my bed, and I sure as hell won't have visions of Death Asteroids dancing through my head.
Posted by Gordon Bonnet at 1:29 AM