An appeal to conservatives

Can I ask my readers who are conservative to stop for a moment, take a deep breath, and listen to what the leaders in the race for the Republican nomination for president are actually saying?

And I'm not talking about the usual issues over which Democrats and Republicans spar -- raising or lowering taxes, increasing or decreasing government spending, more or less involvement of the federal government in the day-to-day lives of American citizens.  Those issues we can talk about, even if we may not all end up agreeing.  I'm talking about stuff that is taking a relatively apolitical guy like myself and shaking me up to the point that I'm wondering if I should be making sure my passport is in order before next November.

Yes, I know, we're all sick unto death of hearing about Trump.  But each time the reasonable amongst us -- liberal and conservative -- have predicted that he'd crossed some kind of moral and ethical line, and that surely his campaign would flare out, his poll numbers have risen.  It's as if some sort of groundswell of lunatic xenophobia and paranoia had been there in the United States this whole time, waiting for its chosen messiah to arrive. 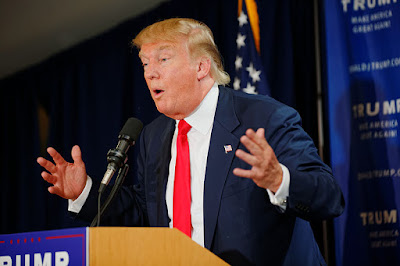 [image courtesy of photographer Michael Vadon and the Wikimedia Commons]

And in the latest salvo, he's saying that we should cut off access to the internet -- that too much freedom of speech is a bad thing.

I had to read this article twice, and listen to the video clip, to convince myself that this wasn't some kind of spoof from The Onion.  But no, he really did say the following:


We’re losing a lot of people because of the internet.  We have to see Bill Gates and a lot of different people that really understand what’s happening.  We have to talk to them about, maybe in certain areas, closing that internet up in some ways.

These are foolish people.

And the conservatives were concerned that Obama was going to flout the Constitution?

You know what?  There are two problems with this statement.  The first is that it's almost certainly wrong.  I think he has a damn good chance of winning enough delegates in the Republican primary to take the nomination -- unless the delegates, urged on by the Republican National Committee, try to create some kind of end run around the nomination process to block him, which will result in (at the very least) the GOP tearing itself apart from the inside out.

But the second problem is that the alternatives aren't much better.  Ted Cruz is in the news today, too, for... being unwilling to criticize Trump:


I do not believe that the world needs my voice added to the chorus of critics [of Trump].  And listen, I commend Donald Trump for standing up and focusing America’s attention on the need to secure our borders... I continue to like and respect Donald Trump.  While other candidates in this race have gone out of their way to throw rocks at him, to insult him, I have consistently declined to do so and I have no intention of changing that now.

It's easy enough to say that Cruz is saying this out of political expediency -- that he is still hoping to create an upsurge in support as the reasonable alternative to Trump, or (perhaps) make a case for his being a choice for vice president should Trump take the nomination.  Either way, it's disingenuous at best, and downright scary at worst.

Because you know what?  Everywhere Trump goes, he is met with crowds of supporters who are willing to sieg heil to what at least Lindsey Graham has the balls to say is a "race-baiting, xenophobic religious bigot who doesn’t represent my party."  Here we have a guy who is basically trying to reintroduce the requirement that people of a certain religion be barred from entering the country even if they're US citizens, and go around wearing identification tags sewn onto their clothing, and there is a substantial fraction of Americans who are shouting, "Hell yes!"

Look, I am no apologist for Islam.  I think that it (1) is an incorrect view of the universe, (2) has encouraged misogyny, violence, and repression of basic human freedoms, and (3) is largely responsible for the morass of misery in Afghanistan, Iraq, and Syria.  (I am in no way trying to minimize other contributors to the problems of the Middle East, least of all American meddling, but the contribution to the overall awfulness by Islam is not inconsequential.)

But to demonize 1.6 billion people -- 20% of the world's population -- as wanting to destroy our country is terrifyingly like the sort of anti-Jewish propaganda that was rife in Germany before World War II.

I have a lot of conservative friends, and a good many liberal ones as well, and despite our differences we pretty much get along.  My own attitude toward politics is usually one of vague bafflement; to me, most political questions boil down either to things that are blitheringly obvious (like whether climate change is happening, or if LGBT individuals should be allowed to marry) or else are such an intractable mess that there probably is no real solution (like how to balance the federal budget and fix the oversight of the American health care system).

But for cryin' in the sink, can we all just step back for a moment, and forget our favorite political labels, and look at what these people are saying?  Because it's leading our country down a very scary path, and one that's been trodden before.  Where it leads is, to put it simply, hell on earth.

And if the unthinkable happens, and a fascist ideologue like Donald Trump ends up being elected president, my wife and I are going to have to give some very serious thought about whether life as expats might actually be the best overall choice.
Posted by Gordon Bonnet at 2:01 AM