Frankly, I suspect that I'd last six hours there before security guards escorted me off the premises for guffawing at the staff.  I first started receiving mailings from them because I was interested in their writing intensives, but (as I found out on my first perusal of their catalog) at least half of their offerings are seriously woo-woo.  One I particularly enjoyed reading about is the use of music in healing, taught by a woman named Wah! (The exclamation point is not me being emphatic; it's part of her name.)  What would possess someone to change her name to Wah! is a mystery in and of itself, but I did go to her website and listen to some of her music, and what I heard seemed to fall into the Overwrought, Therapy-Session-Gone-Horribly-Wrong School of Music.  I didn't find it particularly healing, myself, but maybe the point was that it was healing to her -- I don't honestly know.

A more interesting example, however, are the workshops offered by a fellow named John Perkins that claim to teach you how to shape-shift.  From the description of one of these workshops:

We have entered a time prophesied by many cultures for shapeshifting into higher consciousness.  Polynesian shamans shapeshift through oceans, Amazon warriors transform into anacondas, and Andean birdpeople and Tibetan monks bilocate across mountains.  These shamans have taught John Perkins that shapeshifting - the ability to alter form at will - can be used to create positive change. 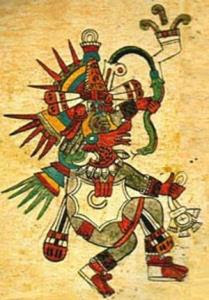 But this demands the question, doesn't it, of whether they actually are becoming anacondas.  Some of the disciples of the woo-woo will respond with something like, "reality is what you think it is."  Which works just fine until reality in the form of a baseball bat wallops you in the forehead, at which point you can think it doesn't exist, you can in fact think that you're an Andean birdperson, but what you really will be is a confused, non-Andean, ordinary person with a concussion and a big old dent in your head.

It is amazing the lengths to which the woo-woos of the world will go to support their beliefs.  My wife Carol, in her nursing program, had to take a course in "alternatives to traditional medicine."  Her own take on this was that if it had been about the role of belief in the efficacy of medicine, that would have been fine; but they didn't stop there.  They started out with therapies for which there is at least some experimental support (such as acupuncture) and from there took a flying leap out into the void, landing amongst such ridiculous and discredited ideas as homeopathy, chakras, and healing through crystal energies.  This last one led to a spectacle that was (according to Carol) acutely embarrassing to watch, wherein the teacher held a crystal hanging from a string over a volunteer's head, to show that the crystal could pick up the volunteer's "life energy" and begin to swing of its own volition.  There was no response from the crystal (surprise!!!) for some minutes, while the volunteer (who was probably seriously regretting raising his hand) and the students in the audience sat fidgeting and looking at each other.  Then, after about ten minutes, the crystal moved.  Hallelujah!  The theory is vindicated!

All of which once again brings up the subject of confirmation bias, a cognitive bias that we here at Skeptophilia have seen all too often.  Basically, if you've already decided on your conclusion, you only pay attention to any evidence (however minuscule) that confirms your idea, and everything else is ignored.  Any movement of the crystal had to be due to the subject's "energy field" -- other hypotheses (such as that the teacher's arm was getting a bit tired after holding the crystal up there for ten minutes, and he moved his hand a little, causing the crystal to swing) are not even acknowledged.

You see what you want to see.  And, if you're lucky, you get to make a bunch of poor college students sit there while you're doing it.

So far, I am sounding awfully self-confident, as I have a tendency to do.  But if I'm being totally honest, I have to look at my own ideas in the same light.  One of the great myths of the last hundred years is, I think, that somehow everyone is biased except for the scientists -- that the scientists have this blinding clarity of vision, that they are objective and unbiased and therefore have cornered the market on truth.

While there are probably scientists who believe this, the truth of the matter is that most scientists are well aware of their biases.  We skeptics, too, see what we want to see.

First, we have to believe that the scientific way of knowing leads us closer to the truth -- which statement, of course, you can't prove.  Furthermore, if you're a researcher, you're not approaching a question with a completely open mind; you already have (at least to some extent) figured out what you think is going on, and so when you design your measurement equipment and your experimental protocol, you do so in a way to find what you think it is that you're going to find.  If there's something else going on, you might not even see it unless you're extraordinarily lucky.  Perhaps that's why serious paradigm shifts have so often happened because of some random piece of evidence, from an unexpected source, that someone (often by accident) notices.  It's how Kepler found out that planetary orbits are elliptical; it's how plate tectonics was discovered; it's how penicillin was discovered.

Science doesn't proceed by clear, logical little steps, by people adding brick after brick to an edifice whose plan is already well known and laid out on the table.  Like most of the other things in this world, it proceeds by jerky fits and starts, false turns, and backtracking.  The "scientific method" no more explains how we've accrued the knowledge we have than "life energies" explain the movement of a crystal hanging from a string.

So then, why am I a skeptic?  Why don't I just go and join Wah! and John Perkins?  (Just think, I could come up with a pretentious single syllable name with a punctuation mark, too!  I think I'd be "Huh?")  For me, the single strength of science as a world view is its ability to self-correct.  You claim that plate tectonics exists?  Okay -- anyone with the equipment, time, and inclination can go out there and verify the evidence themselves.  If an experiment is not found to be repeatable (such as the "cold fusion" debacle), it's not explained away with some foolishness like "the energy fields were being interfered with by the chakras of your aura" -- the whole idea is simply abandoned.  The procedures, equipment, and outcomes are out there for peer review, and if they are found wanting, the theory is modified, altered, or scrapped entirely.

Try that with the healing energy of music.  I bet if several of you were sick, and I played some of Wah!'s music for you, some of you would get better.  Some of you might get sicker.  (I suspect I'd be in the latter category.)  And for those of you who got well, how could we be certain that it was the music that was responsible?  Because Wah! says so?  Because the idea that music could have a healing energy appeals to you?  If I've learned anything in my fifty-five years on this planet, it's that there seems to be no connection between ideas I find appealing and ideas that are true.

If anything, the opposite seems to be the case.  I know I'd love it if Bigfoot and aliens were real, faster-than-light travel was not only possible but easy, and I could do magic à la Harry Potter.  Unfortunately, thus far I'm batting zero on all that stuff.

Anyhow, as usual, I've probably pissed off large quantities of people who are into homeopathy, crystal energies, numerology, astrology, faith healing, and so on.  But I'm reminded of a quote from (of all people) C. S. Lewis, whose wonderful character Mr. MacPhee said in That Hideous Strength, "If anything wants Andrew MacPhee to believe in its existence, I'll be obliged if it will present itself in full daylight, with a sufficient number of witnesses present, and not get shy if you hold up a camera or a thermometer."

To which I say, "hear, hear."  On the other hand, if I get visited tonight by an anaconda, I suppose it will serve me right.
Posted by Gordon Bonnet at 2:04 AM