Happy Xmas, the war is over

We have a lot of issues facing us as a nation.  How to keep the economy on track, including what to do about revitalizing cities with crumbling infrastructures and sky-high crime rates.  How to reform the health care system, the education system, and the prison system in a responsible and forward-thinking fashion.  What do to about the current volatile world situation, including our stance toward Russia, China, and the Middle East.

In such times, legislators have their work cut out for them.  Many of these problems are damn near intractable; any one of them would be a difficult puzzle for our best and brightest.

So it's no wonder that, given the desperate need our country has for sound leadership, last week three dozen members of the House of Representatives turned their attention to...

Sadly, I'm not making this up.  Representative Doug Lamborn of Colorado joined with 35 other representatives to sponsor HR 564, "Expressing the sense of the House of Representatives that the symbols and traditions of Christmas should be protected for use by those who celebrate Christmas."  Here, in toto, is what the resolution says:


Whereas Christmas is a national holiday celebrated on December 25; and

Whereas the Framers intended that the First Amendment of the Constitution, in prohibiting the establishment of religion, would not prohibit any mention of religion or reference to God in civic dialog: Now, therefore, be it

Resolved, That the House of Representatives—

(1) recognizes the importance of the symbols and traditions of Christmas;

(2) strongly disapproves of attempts to ban references to Christmas; and

(3) expresses support for the use of these symbols and traditions by those who celebrate Christmas.

Yup.  That's how I want our government leaders spending their taxpayer-funded time on the job.

You know, maybe I and others of my stripe have not made this clear enough.  So if anyone who believes in the "War on Christmas" is reading this, put on your glasses and get right up close to your monitor, 'cuz I'm gonna make this as clear as I know how.

THERE IS NO WAR ON CHRISTMAS, YOU NIMROD.  WE ATHEISTS DON'T GIVE A RAT'S ASS WHAT YOU DO ON DECEMBER 25.  AS FAR AS WE CARE, YOU CAN STAND ON YOUR ROOF WEARING NOTHING BUT A SANTA HAT AND SHRIEK "MERRY CHRISTMAS" AT PASSERSBY ALL DAY LONG.  YOU CAN HAVE A DISPLAY OF CHRISTMAS DECORATIONS IN YOUR FRONT YARD SO BRIGHT THAT IT DISRUPTS FLYOVER JET TRAFFIC.  YOU CAN HAVE A NATIVITY SCENE ACTED OUT BY LIVE HUMANS, FEATURING REAL BARNYARD ANIMALS AND GENUINE GOLD, FRANKINCENSE, AND MYRRH.

WHATEVER THE HELL MYRRH IS.

WHAT YOU CAN'T DO IS TO DO ALL OF THIS AT PUBLIC EXPENSE, NOR HOST IT IN A PUBLIC SPACE.  "PUBLIC" MEANS FOR EVERYONE, CHRISTIAN AND NON-CHRISTIAN ALIKE.

Okay, I'll stop yelling.  But really.  This is getting idiotic.  From the way these people talk, you'd swear that we atheists are proposing carpet-bombing Whoville.  Okay, there may exist atheists who would make a big deal out of being told "Merry Christmas," insisting that everyone telepathically absorb the information about what greeting they prefer without being told, and taking horrific offense if people don't do so. 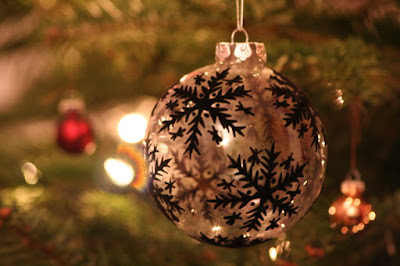 [image courtesy of photographer David Singleton and the Wikimedia Commons]

... who think that everyone who is different than they are is waging a "War on Christmas."

The point is, most people, atheist and religious alike, are perfectly content to live and let live, and only get twitchy when important little pieces of the Constitution like "separation of church and state" are openly flouted.

So there you have it: congressional priorities.  My own opinion is that instead of worrying about a War on Christmas, we as a nation should be more concerned about the War on Intelligence, in which, to judge by the majority of our leaders, Intelligence appears to be losing.  All of which brings to mind the quote by Joseph de Maistre:  "A democracy is the form of government in which everyone has a voice, and therefore in which the people get exactly the government they deserve."
Posted by Gordon Bonnet at 1:41 AM