A loyal Skeptophilia reader and frequent commenter sent me a reply to yesterday's post, about the office of Education Committee chair being filled by a creationist chemtrail-believer who thinks that the nation's problems would be solved if church attendance was mandatory.  The message said, in toto, "I see your Sylvia Allen, and raise you a Michele Fiore," followed by a link.

The link was to a story from ThinkProgress called "Nevada Lawmaker Says Cancer is a Fungus, Recommends Simply Washing it Out."  In it, we read about Michele Fiore, who has a weekly radio show, wherein we hear the following:


If you have cancer, which I believe is a fungus, and we can put a pic line into your body and we’re flushing, let’s say, salt water, sodium cardonate [sic], through that line, and flushing out the fungus…  These are some procedures that are not FDA-approved in America that are very inexpensive, cost-effective.

Inexpensive and cost-effective, sure.  But they aren't FDA-approved for a reason, to wit, injecting salt water and sodium carbonate into a cancer patient's pic line would have the unfortunate side effect of death.  Sodium carbonate, also known as washing soda, is a strong base, and is often used in soap manufacture, taxidermy, and as a silver polish.  You wouldn't want to drink the stuff, much less have it injected directly into your bloodstream.

Based on other places she's dispensed such wisdom, apparently she didn't mean sodium carbonate, but sodium bicarbonate.  In other words, baking soda.  Which likewise is perfectly fine for making biscuits, but is not meant to be put in a cancer patient's pic line.

If you're doing repeated facepalms over this, I haven't told you the most appalling part: Fiore served as Majority Leader of the Nevada State Assembly, and would still be in the position if not for her removal a few weeks ago (not for catastrophic stupidity, which at least would have been heartening, but for financial improprieties).  Worse still, up until last month, she was the CEO...

Her company, "Always There 4 You," says on its "About" page:


Always There 4 You is a locally-owned and operated business.  It has been serving the community for over 10 years. Your health and safety are secure with us.  If you don't want to worry your family members or trouble them with your daily care.  If you live by yourself and are either elderly or disabled, live a simpler life by getting aid from the kind and friendly staff of Always There 4 You.  We are trained to help you in all sorts of areas, With our in-home healthcare, you can get help with washing, bathing, preparing meals, dressing, taking medication, and doing light housework.  You'll also make great friends and companions!  Make life easier on yourself by getting help from Always There 4 You.

You'll also, apparently, get "sodium cardonate" in your pic line if you get cancer.

Encouragingly, the powers-that-be seem to be on to her, because in November Fiore lost her license to provide health care, and "Always There 4 You" closed.  Fiore was unrepentant, and blames the closure on harassment.  "The never-ending barrage of government red tape and regulations has made being in business not worth being in business," Fiore said, showing once again her knack for articulate exposition.

Oh, but you'll never guess what else!  She's also in favor of murdering refugees, not only here on American soil, but anywhere in the world!  She'll do it herself, in fact:


What, are you kidding me? I'm about to fly to Paris and shoot ‘em in the head myself!  I am not OK with Syrian refugees.  I’m not OK with terrorists.  I’m OK with putting them down, blacking them out, just put a piece of brass in their ocular cavity and end their miserable life.  I’m good with that.

So, think about it.  You've lost your health care license, you were removed as Assembly Majority Leader because of a million dollars in unpaid tax liens, you advocate shooting innocent people in the head, and you give health advice to desperately ill people even though you apparently don't know the difference between sodium carbonate and sodium bicarbonate.  What do you do?

You run for Congress, of course. 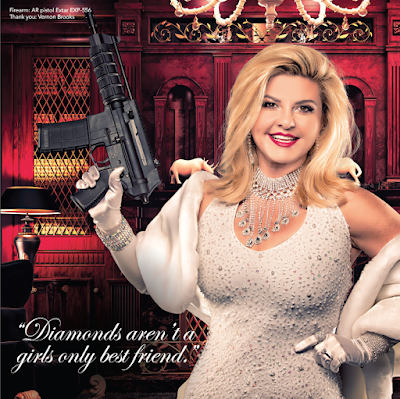 This is, I kid you not, a photograph from Michele Fiore's promotional 2016 calendar.

I would like to say, "Ha ha, I'm just kidding."  I would like even more to say, "Oh, but don't worry, there's no way she'll get elected."  But it's becoming increasingly apparent that you can be completely immoral, and also stupid to the point where it's a wonder you can walk without dragging your knuckles on the ground, and still win the majority of the votes.

So next November, keep your eye on Nevada.  We might just have someone in Congress who will make Louie Gohmert look like a Rhodes Scholar by comparison.
Posted by Gordon Bonnet at 2:49 AM