Here in the United States, we have a fine old tradition of electing people to public office who are entirely unqualified to fulfill their duties.

Several of those have been frequent fliers here at Skeptophilia.  We have Lamar Smith, who chairs the House Committee on Science, Space, and Technology, despite being a rabid climate change denier who gets off by finding new and creative ways to cut the budget for NASA.  We have James "Senator Snowball" Inhofe, who somehow ended up in charge of the Senate Committee on Environment and Public Works, even though he calls anthropogenic climate change a "conspiracy" and has vowed to shut down the Environmental Protection Agency.  We have individuals like Michele Bachmann, Sarah Palin, Louie Gohmert, and Rick Brattin, each of whom alone would be sufficient evidence that having an IQ lower than your shoe size is not necessarily an impediment to winning a majority of the votes in an election.

In fact, I'm beginning to think that there's some kind of mathematical rule of politics in which (vote count) x (IQ) = a constant.

So I suppose it should come as no great surprise that this week, Sylvia Allen was appointed to be the chair of the Arizona State Senate Committee on Education. 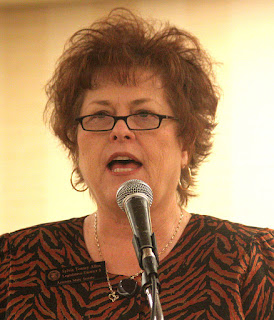 Allen's been here before, too.  Regular readers might recall her statement from March of this year, in which she interrupted a hearing on concealed-carry laws to offer the following puzzling insight:


I believe what's happening to our country is that there's a moral erosion of the soul of America.  It's the soul that is corrupt.  How we get back to a moral rebirth I don't know.  Since we are slowly eroding religion at every opportunity that we have.  Probably we should be debating a bill requiring every American to attend a church of their choice on Sunday to see if we can get back to having a moral rebirth.

What this has to do with concealed-carry laws, I have no idea.  Probably Senator Allen doesn't, either.  After all, this is the same woman who posted on Facebook that she believes in chemtrails and weather manipulation:


Ok, I do not want to get into a debate about weather.  However, I know what I see weekly up here on the flat where I live outside of Snowflake.  The planes usely [sic], three or four, fly a grid across the sky and leave long white trails streaming behind them. I have watched the chem-trails move out until the entire sky is covered with flimsy, thin cloud cover.  It is not the regular exhaust coming from the plane it is something they are spraying.  It is there in plain sight.  What is it they are leaving behind that covers the sky?

Things are happening all around us that we see everyday and just don't get what it is.  I think we throw the "conspiracy theory" at people when we don't understand or have the information they have so we try and explain it that way.  Plus we just don't want to believe that our government would do anything terrible to us.  Well, just a few examples, the IRS attack on the Tea Party, Benghazi, wire taping [sic], Fast and Furious just to name a few and we think that they would not manipulate our weather?

It almost goes without saying that she's also a creationist:


The Earth has been here 6,000 years, long before anybody had environmental laws, and somehow it hasn’t been done away with...  We need to get the uranium here in Arizona, so this state can get the money from it.

And this, dear readers, is the person the Arizona Senate chose to lead the oversight of education in the state.

I keep thinking we're getting to a point where we're wising up, that we're figuring out that when we elect idiots, they (surprise!) do idiotic things.  But I guess we're not done yet.  Sylvia Allen, a woman who not only knows nothing whatsoever about science but is apparently functionally illiterate, is now in charge of such issues as school funding, curriculum oversight, and assessment reform for an entire state.

I'd like to end on a positive note, but I don't see one here.  All I can say in conclusion is that some days, it's hard to remain an optimist.  Lately, I'm more sliding over to the "we deserve everything we get" camp.
Posted by Gordon Bonnet at 1:08 AM