There are some woo-woo ideas that will never die.

I don't care how far-fetched they are, how many times skeptics debunk them, they will still show up over and over again.  These things are like the woo-woo version of a deerfly in summer, buzzing around your head no matter how often you slap it away.

Such is the "faked Moon landing" thing.  It's the tiredest, oldest trope from the conspiracy theory mindset, and I thought that the people who buy into such things had moved on to bigger and better conjectures, such as claiming that every time something bad happens, it's a "false flag" to distract us from... um, even worse things that the government is allegedly hiding from us.

So it was with a weary sort of surprise that I saw the claim resurface not once, but twice, lately.  In the first rehashing, we hear that there has been a video of Stanley Kubrick released in which he admits that he filmed the Moon landing shots -- i.e., they were sound-stage fakes filmed in Hollywood.

In the video, Kubrick is allegedly being interviewed by filmmaker T. Patrick Murray, and says the following:

Murray: Why are you telling the world? Why does the world need to know that the Moon landings aren't real and you faked them?

Kubrick: I consider them to be my masterpiece.

There are several problems with all of this, besides the obvious consideration that anyone who believes that the Moon landings were faked must have a single Hostess Ho-Ho where most of us have a brain:
But do go on about how convincing it all is.

The second story was probably triggered by the first bringing Kubrick's name back into the spotlight apropos of the Moon landings.  And what it claims is that Kubrick hid a bunch of hints regarding the fake Moon landings in his movie The Shining.

The website is a rambling, incoherent mess of "evidence" that includes such nonsense as the "explanation" about why Kubrick changed the number of the haunted room from 217 (what it was in the Stephen King novel the movie is based upon) to 237.

Unfortunately, the Timberline Lodge in Oregon, where the movie was filmed, blows that silliness away -- right on their website, they explain that they did that because they didn't want people avoiding room 217, so they asked Kubrick to change it to a room number that doesn't exist in the hotel.

We are also given incontrovertible evidence like the fact that Stuart Ullman, the manager of the Overlook Hotel who gives Jack Torrance the job as caretaker, is wearing red, white, and blue (well, maroon, white, and blue, to be accurate), so the Overlook represents America.  And that Jack Torrance is the stand-in for Kubrick himself -- because neither one combs his hair much.  And that there is a "Native American motif" on the wall in one scene that "looks like rocket ships."  And that the snowstorm that strands the family in the hotel is "a symbol of the Cold War."

It couldn't be because the movie is set in the Colorado Rockies in winter, or anything.

Oh, and at one point, the character of Danny is wearing an Apollo 11 sweater, so when he stands up, we're witnessing the "symbolic launch of Apollo 11." 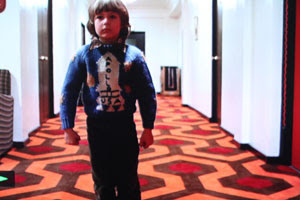 Someone asked Kubrick's directorial assistant, Leon Vitali, about that.  "That was knitted by a friend of [costume designer] Milena Canner," Vitali said.  "Stanley wanted something that looked handmade, and Milena arrived on the set one day and said, ‘How about this?’ It was just the sort of thing that a kid that age would have liked."

Vitali also said that he'd seen a documentary that connected Kubrick and the film to the Moon landings, and spent the entire time he was watching it "falling about laughing," adding that the contention is "absolute balderdash."

Not that this will convince the conspiracy theorists.  A higher-up denying things just makes them conspiracy harder.

So anyhow, this one will bounce around for a while on the interwebz, and then sooner or later fade back into well-deserved obscurity.  But there's no reason to believe it will be gone.  The oldies-but-goodies never stay gone.  They keep coming up like clockwork...

... like the rising of the Moon.  Wonder if that's a coincidence?

Nah, probably not.
Posted by Gordon Bonnet at 1:52 AM