Haters of political correctness have a new target, and that is the Concerned Students of USD, who are demanding that the powers-that-be at the University of San Diego remove a statue of Father Junípero Serra from campus.  Serra was an 18th century Franciscan monk who founded the first nine Catholic missions in California, in locations from San Diego to San Francisco.  Serra's detractors -- and there are many -- have identified him with the policies of colonialism, conversion, subjugation of Natives, and eradication of pre-existing cultures in favor of Spanish Catholicism.

There are a lot of people speaking up against the move, however.  Nathan Rubbelke, writer for the conservative-leaning online journal The College Fix, was clearly in favor of keeping Serra's statue where it is.  "With his settlement, he converted, baptized and educated thousands of Indians," Rubbelke writes.  [I]n a secular sense, one might see Serra’s mission as colonialism, but that a religious perspective offers a different view."

He goes on to quote USD historian Michael Gonzales, who said that it was unfair to hold Serra responsible for the destruction of the California Native society, because the majority of the deaths were caused by disease.  "While scholars can criticize Serra and the Franciscans for lacking medical training," Gonzales said, "they cannot be held accountable for failing to understand the spread of diseases and microbes."

As you might expect, the truth is more complex than that. 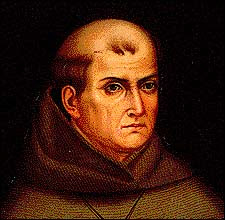 First of all, it must be pointed out that the University of San Diego is a private Roman Catholic university.  Of course the people in charge there support Serra, who just this year was elevated to sainthood by Pope Francis.  They are starting out from the standpoint that however many Natives ended up dying (for various reasons), Serra was saving their immortal souls by establishing Catholicism in the region, so on balance, he was doing god's work.  It's unsurprising that they want to celebrate the person who was one of the founders of the faith in California.

And as far as the Concerned Students of USD, didn't you notice that you were attending a Catholic school?

That said, Serra's treatment of the Natives wasn't as beneficent as Rubbelke and Gonzales would like us to believe.  A Frenchman, Jean de la Pérouse, was a visitor to the Spanish missions of the 18th century, and was appalled at the way the Natives were being treated:


Corporal punishment is inflicted on the Indians of both sexes who neglect the exercises of piety, and many sins, which are left in Europe to the divine justice, are here punished by iron and stocks.  And lastly, to complete the similtude between this and other religious communities, it must be observed, that the moment an Indian is baptised, the effect is the same as if he had pronounced a vow for life.  If he escape, to reside with his relations in the independent villages, he is summoned three times to return, and if he refuse, the missionaries apply to the governor, who sends soldiers to seize him in the midst of his family, and conduct him to the mission, where he is condemned to receive a certain number of lashes with the whip.

Individuals who escaped more than once were brought back and whipped to death.

Robert Archibald, director of the Western Heritage Center of Billings, Montana, wrote the following as the conclusion of a paper about Serra and the missions in the Journal of San Diego History:


The missions were not agents of intentional enslavement, but rather rapid and therefore violent social and cultural change.  The results were people wrenched from home, tradition and family, subjugated to an alien culture and contradictory values.  Predictably these people did not submit to such treatment voluntarily and force became a necessary concomitant.  The result in many cases was slavery in fact although not in intent.  The principle emerges that decent people whose motives as judged by their own standards are excellent, have frequently violated other people who live by different standards.

Whether you're Catholic or not, it remains to be seen whether anyone should celebrate an individual who was, at least in part, responsible for such atrocities.

There's a difference between political correctness and cultural sensitivity.  A recent article in The Atlantic, "The Coddling of the American Mind," highlights this.  The authors, Greg Lukianoff and Jonathan Haidt, explore how in recent years the expectation that controversial issues be treated even-handedly and with sensitivity has morphed, in many colleges, into a demand that no potentially offensive topics be broached at all:


For example, some students have called for warnings that Chinua Achebe’s Things Fall Apart describes racial violence and that F. Scott Fitzgerald’s The Great Gatsby portrays misogyny and physical abuse, so that students who have been previously victimized by racism or domestic violence can choose to avoid these works...  The current movement is largely about emotional well-being...  [I]t presumes an extraordinary fragility of the collegiate psyche, and therefore elevates the goal of protecting students from psychological harm.  The ultimate aim, it seems, is to turn campuses into “safe spaces” where young adults are shielded from words and ideas that make some uncomfortable.  And more than the last, this movement seeks to punish anyone who interferes with that aim, even accidentally.

So the same criticism that was levied earlier against the Concerned Students of USD can be aimed at what the article calls the "trigger warning movement" -- if all you want is to remain comfortable and to have your current beliefs and ideals left unchallenged, why are you in college?  Colleges should be about pushing against your boundaries.  Not to give offense deliberately, mind you; but to encourage you to question your own stance, and to understand more deeply that not everyone sees the world the way you do.  As I tell my Critical Thinking students every year, "You might well leave this class with your beliefs unchanged.  You will not leave with your beliefs unexamined."

The problem is that now any demand for reconsideration of our attitudes toward historical figures is thrown together with what Lukianoff and Haidt call "vindictive protectiveness" -- the implication that any discomfort college students experience is crossing the line into what amounts to the deliberate provocation of PTSD.

The problem is, conflating the two is simply incorrect.  You cannot equate the mindset of hypersensitive college students who expect to glide through life without ever being offended with the expectation that institutions of higher learning adopt a clear-eyed view of history, and a little bit of cultural sensitivity.  Asking an African American student to read Chinua Achebe's Things Fall Apart is hardly the same thing as having a bronze statue on campus of a sadistic bigot who thought he was doing god's will by torturing Natives who didn't want to adopt his beliefs.  Dismissing them both as ill-founded "political correctness" is drawing an oversimplified false analogy.

In other words, wrong.