It is an incredibly frustrating feature of human psychology that it is far easier to sow doubt than it is to eradicate it.

Once you have introduced any seed of suspicion into someone's brain, it tends to stay planted.  It is even more likely to do so when fertilized by the purveyors of bullshit who have a vested interest in your remaining doubtful.

And in case it's not sufficiently obvious by now, yes, I'm referring to the climate change deniers who are currently driving policy in the United States.  I know I ring the changes on this topic pretty often, and I don't want to bore my readers by turning into some kind of Johnny One-Note, but there were two stories this week that prompted me to write yet another post on the subject.

The first is that COP-21, the Paris Climate Change Conference, has reached a draft agreement on managing the causes and effects of anthropogenic climate change in the 21st century.  The conference was attended by a host of world leaders, including President Obama, German Chancellor Angela Merkel, Russian President Vladimir Putin, and Indian Prime Minister Narendra Modi.  And together the leaders and delegates to the conference came up with a draft of a plan that "addresses deforestation, food security, poverty and a host of other issues, with chunks of the document focused on what developed countries can do to reduce carbon dioxide missions by a yet to be determined level by 2050." 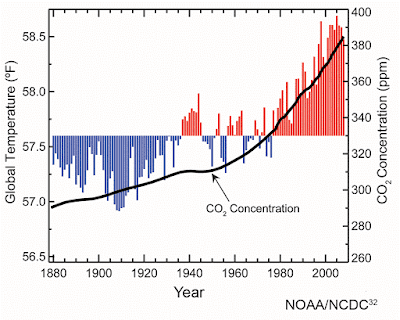 The problem, however, is the same one that plagued the Kyoto Protocols of 1997 and the Bali Accords of 2007; they are only binding if the governments of the countries that are signatories actually agree to abide by them.  And two weeks ago the Senate voted to kill the centerpiece of the Obama administration's efforts to create an American climate change policy, effectively hamstringing any attempt to bring the Paris draft agreement into law here in the United States.

So basically, we're back in the same position as before the conference, which is that the American government is sitting on its collective hands, either saying that addressing the problem is impossible ("economic suicide" is the usual way it's framed), or else that the problem doesn't exist, melting glaciers and unhinged weather be damned.

The second story is the release of a study out of Michigan State University by psychologists Aaron M. McCright,  Meghan Charters, Katherine Dentzman, and Thomas Dietz entitled "Examining the Effectiveness of Climate Change Frames in the Face of a Climate Change Denial Counter-Frame."  And what they found is as illuminating as it is frustrating:


Prior research on the influence of various ways of framing anthropogenic climate change (ACC) do not account for the organized ACC denial in the U.S. media and popular culture, and thus may overestimate these frames' influence in the general public.  We conducted an experiment to examine how Americans' ACC views are influenced by four promising frames for urging action on ACC (economic opportunity, national security, Christian stewardship, and public health)—when these frames appear with an ACC denial counter-frame.  This is the first direct test of how exposure to an ACC denial message influences Americans' ACC views.  Overall, these four positive frames have little to no effect on ACC beliefs.  But exposure to an ACC denial counter-frame does significantly reduce respondents' belief in the reality of ACC, belief about the veracity of climate science, awareness of the consequences of ACC, and support for aggressively attempting to reduce our nation's GHG emissions in the near future.

Put more simply; a message introducing doubt about a claim carries significantly more weight than one that supports the claim.

"The positive frames really don’t move the needle at all," said McCright, "and the presence of the denial counter-frame seems to have a suppressive or a negative effect on people’s climate change belief."

Ed Maibach of George Mason University, who studies the public communication of information on climate change, went even further.  "This research makes clear that ‘don’t worry’ is an inherently more compelling message than ‘you should worry about climate change for this reason’ regardless of what that reason is," Maibach said.

As far as why this is, McCright said that there's a fairly persuasive, although as yet untested, explanation.  "It’s simpler, for one thing," McCright said.  "You don’t have to grasp any science to say, ‘scientists disagree.’  It’s always harder to change people’s opinions than it is to keep the status quo.  And then for the last two decades, the message from the political right has been strong, consistent, and daily."

Which leaves me in the position of wondering whether there is anything at this point that can be done.  The Denial Machine has been incredibly effective, sowing doubt not only about the scientists' motives, but about the data itself.  And once you believe that the data -- i.e., the facts -- are just spin, then you can be talked into believing anything.

So as frustrating as it is to those of us who would like to pass along a habitable world to our children and grandchildren, the Paris Conference is likely to follow in the path laid out by so many others, in accomplishing nothing but a lot of talk.  And here in the United States, we still have the Congress led by science deniers who either are willfully ignorant or else are willing to exchange long-term ecological stability for short-term expediency and greed.

You have to wonder how history will look at us, today, sitting here going "la-la-la-la-la-la, not listening" while for forty years the scientists have tried to warn us about the impending catastrophe.  The phrase "fiddling while Rome burns" comes to mind, along with the corollary that Nero is not a figure whom our leaders should be striving to emulate.
Posted by Gordon Bonnet at 1:31 AM