The pseudoscience that wouldn't die

I was chatting with a couple of students yesterday, and the subject turned to aliens.  Conversations seem to get steered that way when I'm around.  It's odd.

Anyhow, one of the students said, "Let's say humans developed interstellar space flight.  And we went to another star system.  And let's say that on one of the planets in that star system there was intelligent, but non-technologically advanced, life.  Don't you think that humans would appear like gods to them?"

I said that was probably so, and quoted the line from Arthur C. Clarke, that "To the primitive mind, any sufficiently advanced technology would be indistinguishable from magic."

"So," the student said, "if advanced aliens had come to Earth, thousands of years ago, wouldn't they have appeared like gods?  And become the focal points of religions?"

And then he said, "Don't you think it's hard to believe that a bunch of primitive humans were able to build the pyramids, and Stonehenge, and all?"

And at that point, I said, "Good lord, you haven't been reading Chariots of the Gods, have you?"

This book, written by Erich von Däniken in 1968, is like the Creature That Wouldn't Die.  Like the Hydra, it just keeps regrowing heads and coming back at you again.  In fact, Chariots of the Gods was only the first of a series of books by von Däniken, all claiming that the Earth had been visited by Ancient Astronauts.  When Chariots of the Gods hit the bestseller list, he followed it up with repeated riffs on the same theme, to wit:  Gods from Outer Space; The Gold of the Gods; In Search of Ancient Gods; Miracles of the Gods; Signs of the Gods; Pathways to the Gods; and Enough About The Gods, Already, Let's Talk About Something Else.

Obviously, I made the last one up, because von Däniken at age 80 is still blithering on about the Gods.  His books have sold 62 million copies, have been translated into 32 languages, and his ideas formed the basis of a theme park in Switzerland, thus further reinforcing my belief that skepticism will never be the lucrative profession that woo-wooism is. 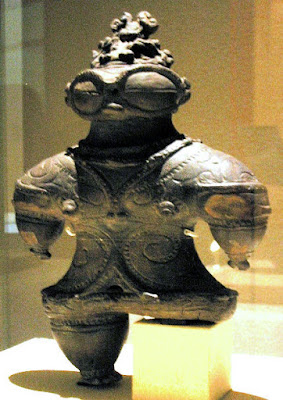 A statue from the late Jomon period of Japan (1000-400 B.C.E.), which Erich von Däniken thinks can only be explained as a space-suited alien, since humans obviously never include weird imaginary creatures in their mythological art.  [image courtesy of the Wikimedia Commons]

You might ask what von Däniken's evidence is, other than the argument from incredulity ("wow! The pyramids are really big!  I can't imagine making a pyramid, myself.  Therefore they must have been designed and constructed by aliens!").  Here are a few pieces of evidence that von Däniken claims support the Ancient Astronaut hypothesis.
In fact, piece after piece of von Däniken's "evidence" falls apart if you analyze it, and try not to be swayed by his hyperdramatic statements that always seem to include phrases like "can only be explained by," "scientists are baffled by," and "a mystery beyond human ken."  In fact, von Däniken's books were written because they make money, and are, simply put, pseudoscientific tripe.  The best debunking of his claims was Ronald Story's 1976 book The Space Gods Revealed, which is a page-by-page refutation of all of von Däniken's claims, and remains to this day one of the best skeptical analyses of pseudoscience ever written.

So, sad to say, my student's faith in the Ancient Gods is ill-founded.  A shame, really, because I would like nothing better than concrete evidence of alien civilizations.  But if you want me to accept the extraordinary claim of alien visitations in Earth's distant past, you're going to have to give me evidence a little more extraordinary than a rusty post, a map, and some big stone statues.
Posted by Gordon Bonnet at 2:31 AM