Wagering everything we've got

Prior to the 20th century, lung cancer and emphysema were rare diseases.  When someone contracted either of these diseases, doctors took notice, simply because they occurred so infrequently.  But with the turn of the 20th century came the rise of tobacco consumption, and the formation of the big tobacco companies -- R. J. Reynolds, Lorillard, and Philip Morris -- who cashed in on the fad, and quickly rose to be formidable forces in the marketplace.

Doctors soon noticed the uptick in lung cancer rates, and it wasn't long before they figured out the strongest predictor of lung cancer occurrence.  Way back in 1939, Franz Hermann Müller of Cologne Hospital published a study of 86 lung cancer patients and a similar number of cancer-free controls, and found that the cancer sufferers were far more likely to have smoked than the cancer-free individuals did.

And of course, that information eventually found its way to the higher-ups in the tobacco industry.  As Robert Proctor points out in his paper "The History of the Discovery of the Cigarette-Lung Cancer Link: Evidentiary Traditions, Corporate Denial, Global Toll," it is clear from the documents that the people in charge of Big Tobacco knew about the connection -- but suppressed the evidence, or lied about it outright.  Proctor writes:


Tobacco industry insiders by the mid 1950s clearly knew their product was dangerous.  In December of 1953, when Hill and Knowlton were exploring how to respond to the uproar surrounding the publication of carcinogens in cigarette smoke, one tobacco company research director commented in a confidential interview: ‘Boy! Wouldn't it be wonderful if our company was first to produce a cancer-free cigarette.  What we could do to competition!’  Another remarked on how fortunate it was ‘for us’ (ie, for cigarette manufacturers) that smokers were engaging in ‘a habit they can't break’.  The mid-1950s cancer consensus was clearly (albeit privately) shared by the companies; and the reality of addiction was also starting to be conceded—at least in internal industry documents.

UK cigarette makers also commented on the lung cancer consensus.  Three leading scientists from British American Tobacco (BAT) visited the USA in 1958, for example, and found that with only one exception all of those consulted—including dozens of experts inside and outside the industry—believed that a cancer connection had been proved.  Alan Rodgman at Reynolds  four years later confessed that while evidence in favour of the cancer link was ‘overwhelming’, the evidence against was ‘scant’.  Helmut Wakeham at Philip Morris about this same time drew up a list of dozens of carcinogens in cigarette smoke.  None of this was made public; indeed the tobacco industry throughout this time and for decades thereafter—until the end of the millennium—refused to admit any evidence of harms from smoking.

The result?  Proctor estimates that at current worldwide cancer rates, there is a death from lung cancer every twenty seconds.  90% or more of them would not have occurred had the individual not been a smoker. 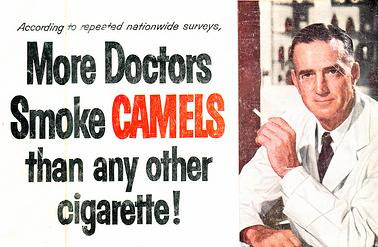 1950s pro-smoking advertisement, meant to cast doubt on the link between lung disease and cigarettes [image courtesy of the Wikimedia Commons]

Appalled?  Then consider, if you will, the parallels between this situation and the current campaign of disinformation and denial being waged by petroleum companies with regards to anthropogenic climate change.

According to an investigative report done by Inside Climate News, in 1978 Exxon launched its own carbon dioxide monitoring program, after reports that scientists were looking at a connection between carbon dioxide levels and global average temperature.  Between 1979 and 1983, Exxon, Mobil, Amoco, Phillips, Texaco, Shell, Sunoco, Sohio, Standard Oil of California, and Gulf Oil formed a task force to monitor and share climate research.

And what came out of this joint effort was, at first, an acknowledgement of the problem.  In 1980, Bruce S. Bailey of Texaco made what would be today a mind-boggling statement coming from a petroleum executive: that "an overall goal of the Task Force should be to help develop ground rules for energy release of fuels and the cleanup of fuels as they relate to CO2 creation."

But they very quickly realized two things; the problem was far bigger than they'd thought, and reducing carbon dioxide release was going to be very bad for business.  Soon, the delegates from the petroleum companies were singing a far different tune.  The CO2 and Climate Change Task Force was renamed the Climate and Energy Task Force, and by 1990 they had formed the Global Climate Coalition -- a lobbying group whose sole purpose was to cast doubt on anthropogenic climate change, and to make certain that the United States government did nothing to curb fossil fuel use.

As a communication between members of the GCC, recently made public by the Inside Climate News report, put it: "Unless 'climate change' becomes a non-issue, meaning that the Kyoto proposal is defeated and there are no further initiatives to thwart the threat of climate change, there may be no moment when we can declare victory for our efforts."

As far as the scientists employed by the oil companies, they certainly knew what was going on.  One, Raymond Campion of Exxon, wrote to colleague J. T. Burgess in 1979 that "warming of the atmosphere... may be noticeable in the next twenty years," and that natural oscillations in weather patterns would "worsen the effect."  They even requested input from the scientists; in 1980 John A. Laurmann of Stanford University was asked to address the members of the GCC, and told them that "the amount of CO2 in the atmosphere is projected to double by 2038, [and] would likely lead to a 2.5 degrees Celsius rise in global average temperatures with major economic consequences...  [M]odels show a 5 degrees Celsius rise by 2067, which would result in globally catastrophic effects."

Their response?  To make sure that the information never gained traction beyond the scientists themselves.  Henry Shaw, a scientist at Exxon, said that such information shouldn't become common knowledge because it "may alarm the public unjustifiably."

The result was that until the mid-1990s, most people in the United States had never heard of climate change.  It got out eventually, of course -- but rather than making the fossil fuel industry retreat in disarray, they stepped up their campaign of denial in the media, and made sure that the advisory posts on the subject of energy production and the environment were occupied by pro-industry individuals.  For example, after George W. Bush was inaugurated in 2001, he appointed Philip A. Cooney, a former lobbyist for the American Petroleum Institute, as chief of staff of the Council on Environmental Quality.

Does the phrase "fox in charge of the henhouse" come to mind?  Especially given that when Cooney resigned in 2005 -- after allegedly doctoring reports to cast doubt on scientific consensus on global climate change -- he went to work for ExxonMobil?

And this is the group of people who are still, ten years later, driving climate policy in the United States.  They are still spending millions of dollars in a disinformation campaign, still funding candidates for public office who are unwilling to take away the petroleum industry's carte blanche, and still doing whatever they can to convince us that the last ten years of record-breaking temperatures and insane weather have nothing to do with anthropogenic carbon dioxide.  Jack Gerard, the current president of the American Petroleum Institute, has said that any federal mandate to reduce greenhouse gas emissions is "destructive government interference."

But eventually the "la-la-la-la-la, not listening" stance of our government toward climate scientists will be revealed as what it is -- catastrophic mismanagement by the individuals who were elected to safeguard the citizenry of the United States.  Eventually the climate itself will cast a harsh light on the past forty years of evidence suppression and outright falsehoods.  And if this year is any indication, "eventually" might be coming awfully quickly.

Because this time, we're not talking about people getting cancer because they were misled by unscrupulous tobacco companies who cared more about the profit motive than they did about either public health or the truth.  This time, the stakes are higher.

This time, we are in a game with people who have a proven record of lies, evasions, and half-truths -- and what is being gambled on is the long-term habitability of the Earth.
Posted by Gordon Bonnet at 3:41 AM