New from the "Don't We Have Worse Things To Worry About?' department, we have two astronomers from Columbia University proposing that we use a laser-based device to cloak our planet from being spotted by hostile aliens. 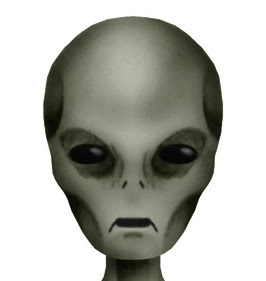 In a paper in the Monthly Notices of the Royal Astronomical Society, David Kipping and Alex Teachey suggest that it might be time to consider shielding our planet from unfriendly eyes.

"About ten years ago, it was proposed that aliens might choose to signal their presence to us not through radio waves, but by building megastructures, which would transit their star and create very weird and artificial-looking transits," Kipping said, bringing to mind the odd luminance drops discovered last year in "Tabby's Star," an anomaly that has yet to be satisfactorily explained.

Scientific luminaries as prominent as Stephen Hawking have suggested that however exciting the discovery of extraterrestrial intelligence would be, it might not be so great if the aliens came for a visit.  "We don't know much about aliens, but we know about humans," Hawking said.  "If you look at history, contact between humans and less intelligent organisms have often been disastrous from their point of view, and encounters between civilizations with advanced versus primitive technologies have gone badly for the less advanced.  A civilization reading one of our messages could be billions of years ahead of us.  If so, they will be vastly more powerful, and may not see us as any more valuable than we see bacteria."

Put even more succinctly by none other than Dave Barry, "It's all well and good for Carl Sagan to talk about how neat it would be to get in touch with aliens, but I bet he'd change his mind pronto if they actually started oozing under his front door.  I bet he'd be whapping at them with his golf clubs just like the rest of us."

Kipping says that the idea of cloaking the Earth is feasible, and wouldn't be very expensive, costing around the same in energy as seventy typical homes.  "We realized that because lasers are narrow directed beams, it was quite feasible to produce artificial transits," Kipping said.  "We then took this a step further and had the idea that one could use such a laser system to completely cloak the Earth's transit."

So that sounds okay.  But this does bring up two troubling points.

The first is that if there are intelligent life forms out there looking in our direction, they already know we're here.  Starting in the 1950s, we've been beaming radio waves into space carrying our television shows, an idea that has spawned movies as different as Starman and Galaxy Quest.  Any aliens intercepting our transmissions started with such feats of brilliance as Gilligan's Island, The Beverly Hillbillies, and (heaven help us all) Lost in Space, which means they have probably already decided that Earth's inhabitants are a bunch of complete morons.  It wouldn't surprise me to find out that we've already been the subject of a documentary on another planet entitled The Derpuloids of Dumbass-3.

So there's the problem of too little, too late.  But the more serious issue is that maybe instead of worrying about the arrival of hostile aliens, we should attend to more pressing problems.  To wit: climate change (and the fact that our leaders are largely sitting around with their fingers in their ears saying, "la-la-la-la-la, not listening" whenever a climate scientist brings up the topic).  Environmental devastation on a mammoth scale.  The increase in earthquakes directly caused by hydrofracking.  The fact that the American presidential election is increasingly looking like it will boil down to, "Which disease would you like?  Leprosy or syphilis?"

I know that installing a Romulan Cloaking Device on the Earth doesn't preclude our attending to some of these other issues, but I do worry about our attention being trained on the wrong things.  If you consider overall risk, I think that the collapse of the ice shelves, and the flooding of every coastal city on Earth -- now considered virtually inevitable -- is a little more critical than taking measures to keep away the Cardassians.

So anyway.  I'm all for SETI (the Search for Extraterrestrial Intelligence).  I would love nothing better than to have concrete proof that we're not alone in the universe.  But considering the vast distances we're talking about -- keep in mind that light from the nearest star takes a little over four years to get here -- I'm thinking we're safe.  Even if the aliens watched episodes of Green Acres, decided that humanity didn't deserve to live, and took off in their spaceship with planet-destroying missiles, I think we won't have anything to fret about for a long time yet.
Posted by Gordon Bonnet at 1:52 AM