Being a science teacher, I'm perhaps to be excused if I think that a lot of the world's problems would be significantly mitigated if everyone learned more actual science.

It wouldn't fix everything, mind you.  Even I'm not gung-ho enough to think that.  But if we all could admit that anthropogenic climate change is real, that evolution happened, that vaccines work, that scientists aren't some kind of evil cadre of conspirators who would like nothing better than to destroy the Earth -- well, it would go a long way toward making this a much saner world.

This idea is bolstered by some research that I just ran across -- although it dates to 2008, I hadn't heard about it.  Entitled "Lacking Control Increases Illusory Pattern Perception," by Jennifer Whitson and Adam Galinsky of the University of Texas, it describes research supporting the idea that when people feel confused or out of their depth, they have a tendency to see patterns that don't exist.  It's as if the mind becomes desperate to find something to hang on to, and attempts to force order from chaos.  The authors write:


Participants who lacked control were more likely to perceive a variety of illusory patterns, including seeing images in noise, forming illusory correlations in stock market information, perceiving conspiracies, and developing superstitions.  Additionally, we demonstrated that increased pattern perception has a motivational basis by measuring the need for structure directly and showing that the causal link between lack of control and illusory pattern perception is reduced by affirming the self.  Although these many disparate forms of pattern perception are typically discussed as separate phenomena, the current results suggest that there is a common motive underlying them.

Science writer Ed Yong draws a connection between this phenomenon and belief in conspiracy theories.  In his wonderful blog Not Exactly Rocket Science, Yong writes:


Obviously, the effect has both good and bad sides that should make for interesting discussions.  For a start, an ability to spot patterns isn’t necessarily a bad thing. It could be downright beneficial if it ramps up a person’s skill at spotting subtle trends that are actually real (although future studies need to test whether this actually happens).

Even spotting false patterns could have psychological benefits if it restores a person’s sense of control, increases their confidence or even reduces their risk of depression.  Scientists, fond as we are of truth and fact, would typically argue that it’s better to get an accurate picture of the world around you.  Whitson and Galinsky agree but they also take a pragmatic stance, saying that “it may be at times adaptive [to allow] an individual to psychologically engage with rather than withdraw from their environment.”

Of course, there are instances when making false connections can be downright damaging, especially if they’re used as the basis of bad, or even fatal, decisions.  Imagined pharmaceutical conspiracies or implications drawn about medicines from one-off anecdotes could drive people to embrace fruitless or potentially dangerous forms of alternative treatment.  People can avoid taking responsibility for, or psychologically coping with, events in their lives if they ascribe them to higher powers or sinister agencies.  And seeing too much meaning in the actions of others could lead to paranoia and severed social ties.

Which certainly supports the conjecture that belief in conspiracy theories would be stronger amongst people who feel that they have little control over their lives.  If you feel yourself to be at risk, if you think your home, family, or your entire way of life is in danger of being irreparably damaged, you begin to cast about for explanations -- because, after all, even a terrifying explanation is better than all of those bad things happening for no reason at all.  So you begin to put together pieces of information, all the while looking for a pattern.

And Whitson and Galinsky's research implies that if there is no pattern, your brain simply invents one. 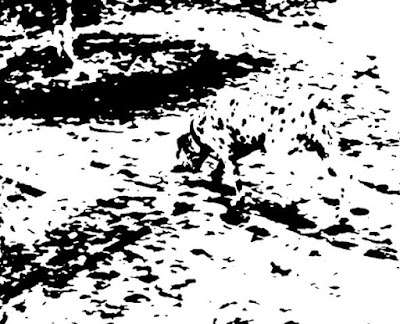 See the pattern?  [image courtesy of the Wikimedia Commons]

It's not that I don't understand the drive people have for there to be an explanation.  The idea that bad things just happen because they happen -- that the world is so constructed that it raineth alike on the just and the unjust -- is a pretty bleak view.

But there are a lot of things that we do understand, and that's where science education comes into play.  Whitson and Galinsky's research shows once we know more about those phenomena for which we do have an explanation, we not only make smarter decisions, but our feelings of befuddlement and confusion diminish.  We're less likely to find illusory patterns and miss the reality, or to be taken in by people who are muddying the situation because of a specific agenda (currently the case with the political attitudes toward climate change).

It brings me back, as I have many times, to the wonderful quote by Carl Sagan: "It is far better to grasp the universe as it really is than to persist in delusion, however satisfying and reassuring."
Posted by Gordon Bonnet at 1:32 AM