There are times that I believe that whoever is running the universe has a wicked, wicked sense of humor.

Many of you will remember virulently anti-LGBT pastor James David Manning, of the Atlah World Missionary Church, who won the World Championship Weird Diatribe Award in 2014 by saying that no good Christian should patronize Starbucks because they put the "semen of sodomites" in their cappuccinos.  So the guy obviously has a screw loose, but that doesn't stop him from having parishioners flock to his church, nor did it prevent his getting a national venue for defending his epithet-laden, spittle-flecked screeds on Hannity & Colmes.

So I read with interest a new development regarding Manning and Atlah; he stands a good chance of losing his church building because of non-payment of creditors. 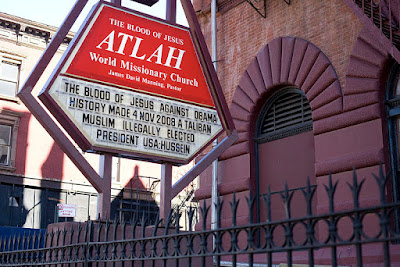 Manning, of course, isn't going to take this lying down.  His first response was, "We don’t owe the taxes.  We’re tax-exempt.  We’re a church, for crying out loud!"  Illustrating that he not only has odd attitudes toward sexuality and morality, he evidently doesn't understand the difference between "paying your debts" and "paying your taxes."

But according to Manning, the fact that he owes over a million dollars to various people and agencies is not why his building is being foreclosed.  "This foreclosure is a bogus foreclosure," he said, "inspired by the [New York City Mayor Bill] de Blasio administration, probably prompted by Obama, to finally try to shut up my very strong voice against this wicked and immoral activity of sodomy."

So you can imagine what he thought when he found out that the first agency in line to buy the building if he loses it is an organization...

Sorry, I couldn't help myself.  This is simply too perfect.  I know that as a staunch, if unorthodox and rather single-minded, evangelical Christian, he doesn't believe in karma.  But seriously.  It's almost like things were set up so as to give his particular sensibilities a painful twist.

Predictably, Manning himself was outraged.  When he found out about this, he held forth with a curse that is bizarre even by his standards:


The next time you get poked in the butt, a flame, when that man pulls that penis out of you, a flame will shoot out of you!  I got the word in my mouth!  You think AIDS was bad?  You ain’t seen nothing yet!  Thus sayeth the lord!  I’m the lord’s servant!  I’m the sodomite slayer!  You gonna see, it’s gonna be a wonder to behold!  You’re gonna see the power of God fall upon Harlem!  Tell these faggots, either they get outta town or flame and fire gonna come outta their butthole.  And anybody that sympathizes with ’em, they gonna have a flame shooting outta their vagina.  You gonna need asbestos panties!  God has sent the word!  Ye shall be justly afflicted!  God will destroy you!

Now I don't know about you, but I think the ability to shoot flames out of your ass isn't an affliction, it's a superpower.  Just think of what that could do!  If some bigoted jerk starts hurling epithets at an innocent gay guy, all he has to do is turn around, drop trou, and toast the sucker.

And I won't even get into how a vaginal flamethrower would be a serious deterrent to rape.

So anyway.   Manning was unhinged to begin with, but at this point it sounds like he's completely lost his grip.  The foreclosure hearing is supposed to occur later this month, so stay tuned.  Because I think that no matter what happens, we're in for some fireworks.

Literal or metaphorical.
Posted by Gordon Bonnet at 2:01 AM